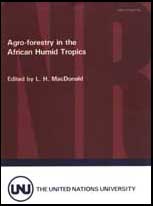 The paper argues the case for adopting agro-forestry in Kenya, with the emphasis being on marginal lends. Developments in the agricultural and forestry sectors are highlighted, particularly their parallel but heretofore unintegrated natures. The future of taungya as an agro-forestry subsystem is discussed. Recommendations regarding the various factors to be taken into consideration when developing an agro-forestry package are given. Finally the paper emphasizes that the "magic agro-forestry tree or animal'' approach is unlikely to prove successful.

Historically, Kenya has adopted a sectoral approach to agricultural and forestry management and production. There has been a near total lack of co-ordination at the policy level for the two sectors. For instance, the three major agricultural development plans (the ALDEV plan in 1945, the Swynnerton plan in 1954, and the Agriculture Act of 1967) have all dealt with agricultural production quite in isolation from forestry developments; there has even been a tendency to relegate forestry development to a service in increasing agricultural productivity. More significantly, there has been a great imbalance in the planned and realized contribution to national socio-economic development between the forestry and agricultural sectors, with the scale tilting heavily in favour of agriculture. The fact that the two have continued to be implemented by two different government ministries has further hindered co-ordination of activities that could lead to the development of agro-forestry systems.

The sectoral strategy is unlikely to continue to yield success in Kenya for three main reasons:

Given this background, this paper attempts to review the prospects and problems of agro-forestry developments in Kenya.

The dominant forest policy in Kenya is the protection of forests for the preservation of the water-catchment function, although the sustained supply of wood-based products like fuelwood, timber, pulp and paper, etc., has become more prominent in recent years. Natural and cultivated forests cover some 2 million ha, i.e., less than 3 per cent of the national land base. Of this, about 0.5 million ha are already planted with fast-growing exotic monocultures, mostly of Cupressus lusitanica, Pinus patula, Pinus radiate, Eucalyptus saligna, and Eucalyptus grandis.

Consistent with Kenya's wide altitudinal variation, there is a wide variety of natural forests, ranging from the lowland forests on the east coast to the alpine moorland boundaries on the snow-covered peaks of Kenya's mountains. Thus, five different biomes and nine subtypes have been identified among Kenya's forests (Lamprey 1977). Compensatory forestry practice is currently confined to the high altitude, high potential lands and incorporates the shamba or taungya subsystem.

The last three years have seen a great shift in national emphasis to forest development in the arid and semi-arid parts of Kenya. In these efforts, important lags in the development of appropriate methods have been analysed (Owing 1980). In general, the experience already gained tends to suggest that tree crops alone, no matter how fast they grow, cannot be economically attractive to the smallscale farmer and that some package combining trees and crops, or trees and livestock, or trees and crops and livestock is more desirable in arid areas of Kenya.

Kenya has an agricultural economy and relies heavily on exports of high-quality tea and coffee. The country has a fairly well developed beef and dairy industry with substantial exports to neighbouring countries and overseas. The production of staple cereals and beans to meet internal demands is reasonably efficient, and these commodities are imported only when drought or flooding hits the country. Agricultural production activities are organized on both a large scale (co-operatives and large-scale farmers) and a small scale, with the national average for agricultural land holding per family about 1.25 ha.

Traditionally, a few trees have been left on the farm even if there is no apparent use. In general, however, there is little rationalized agro-forestry in the country.

Taungya is the most conspicuous example of an agro-forestry system in Kenya. It has been estimated that annual maize production under this subsystem averages 4.5 t/ha and that about 10 per cent of the total national maize production comes from this forest development practice (Wanyeki 1980). However, this forestry practice is very labour-intensive and is rapidly being phased out because of labour costs and settlement implications.

There are other, much less spectacular examples on the Kenyan coast. These include coconut palm-crop mixtures, coconut palm-grazing mixtures, cashew nut-grazing mixtures, and cashew nut-legume mixtures. Other combinations in other areas include Albizia gummifera and grazing in the highlands, Acacia albida and cereals in the arid areas to the north, Balanites aegyptiaca and grazing in Baringo and Samburu districts, etc.

The dominant conclusion from such a survey is that the existing agro-forestry examples are those that have evolved in traditional agriculture as a result of constraints in given localities and they are in the experimental stages. This clearly suggests that the next important step in agro-forestry development in Kenya should be the further identification and scientific rationalization of the most appropriate agro-forestry packages for the different ecological zones.

Although there is a plausible case for agro-forestry as a realistic land-use system in Kenya, one is still faced with the real and large problem of how to sell an appropriate agro-forestry package to the farmer or the individual landholder. It must be recognized that the farmers, just like the professional agriculturalists or foresters, carry out land productivity operations with a polarized mind. There are major barriers to be broken down before they can readily accept agro-forestry proposals, and these barriers have been created by the discipline's short history and the more remote history involving the evolution of cultural values. There are important socio-economic factors that are often specific to a locality and ethnic group.

Given the Kenyan situation, I believe that a systematic development of sound agro-forestry systems should be undertaken through a critical appraisal of the:

In conclusion, nothing much can be accomplished from a recount of agro-forestry practices, either indigenously evolved or exotic, including the splashing here and there of the "magic" agro-forestry plants and animals. A more systematic development is needed that takes into account socio-cultural factors, scale of operation, economic returns, land capability, end-product diversity, and stability of the productive system. Such an approach would probably result in an agro-forestry package that is readily acceptable in different parts of Kenya.