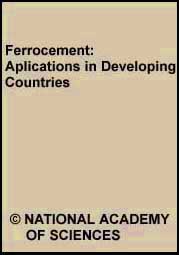 Office of The Foreign Secretary

Ferrocement, a thin-shell concrete reinforced with wire mesh, is a high-quality construction material whose ingredients are widely available in developing countries. It can be used to build a wide range of structures, and can be worked mainly by unskilled, though supervised, labor. Throughout the world, highly satisfactory fishing boats, pleasure craft, storage tanks, housing components, and assorted agricultural and commercial facilities have been construced of ferrocement, and its use is increasing rapidly.

With a view toward its future impact, the Ad Hoc Panel on the Utilization of Ferrocement in Developing Countries was convened by the Board on Science and Technology for International Development as part of its continuing study of technological innovations relevant to the problems of developing countries. The panel included some persons experienced in successful applications of ferrocement to land and water uses and others familiar with construction needs in developing countries. The panel concentrated on three specific tasks:

· Evaluating the current state of the art of ferrocement as an engineering material in order to identify its known properties and characteristics.

· Evaluating the principal areas of application on both land and water.

· Developing specific recommendations for promoting the use of ferrocement in a logical, effective manner.

Deliberately scant in technical language and brief in documentation, the report is detailed enough to provide a clear understanding of what ferrocement is and what it can do. In particular, this report seeks to convey a sense of ferrocement's wide-ranging potential to readers in developing countries- government officials, technical assistance representatives, and technical experts-who are becoming more curious about this increasingly discussed technology.

In the final stages of the preparation of this report we were saddened to learn of the death of W. Morley Sutherland. During the past 15 years he had played a preeminent role in the development of ferrocement for boatbuilding. He brought intense personal dedication and wide practical experience to the deliberations of the panel.