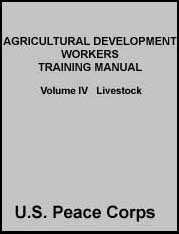 Volume IV of the Agricultural Development Worker's Training Manual has been developed for Peace Corps by A. L. Nellum and Associates, Inc. (ALNA) along with Volume I, II and III, at PENN Center in Frogmore, South Carolina in 1982.

The principal author of Volume IV is Neil Bacon, Senior Crops Livestock Trainer. Assisting him with the Poultry sections was Carmine Russo. Meg Brown and Michell Jacob also contributed ideas and resources to the product. Julia Simmons, Barbara White, Kim Thorne and Ronnie Gold prepared the text. Martin J. Blank supported the development of this volume in the ALNA headquarters office, while Michael Gibbons directed the overall project in Frogmore.

Appreciation is extended to Peace Corps staff who assisted in the task of preparing this volume: Calvina Dupre and Franklin Moore. We wish to thank Emory Campbell, Executive Director of PENN Center, the St. Helena island community and those trainees who participated in the training programs which gave life to this volume.

We are also grateful to the following publishers for granting us the right to reprint selected tables and charts:

The following additional resources were also particularly helpful in developing this document:

- Aids to Goatkeeping by Carol A. Leach

- Goat Production in the Tropics by Devendra & Burns

- Nutrition of the Chicken by Scott, Nesheim, & Young

- The Merck Manual of Veterinary Science

- The Role of Sheep & Goats in Agricultural Development

A. L. Nellum and Associates, Inc.