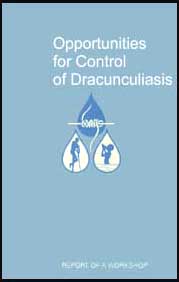 Dracunculiasis transmission is considered to be "water-based," that is, dependent on direct contact with water. The cycle of transmission requires that (1) infected individuals immerse the mature emerging worm in water used for drinking, (2) suitable cyclops species are present in that water source under optimal conditions, and (3) someone drinks water containing cyclops infected with mature Dracunculus larvae. Any break in this chain of events will interrupt transmission of dracunculiasis.

Effective personal protective or prophylactic measures that may be used include boiling the drinking water or straining 'it through a cloth to remove cyclops. The utility of these measures for a large-scale attack on the problem is somewhat diminished by their dependence on intensive educational efforts and by their inconvenience or cost (e.g., farmers quenching thirst in fields, firewood needed for boiling water). Health education, including community organization, might also be employed to encourage residents of affected villages to prevent people suffering from the disease from entering, and thereby contaminating, sources of drinking water.

Effective control measures include the periodic chemical treatment of water used for drinking in affected villages to kill cyclops. Temephos (Abate) is the insecticide most commonly used for this purpose. At concentrations of 1 part per million in stagnant surface sources of drinking water, temephos kills cyclops; is harmless to vegetation and fish; is tasteless, colorless, and odorless in drinking water; and has a wide margin of safety for ingestion by humans. Moreover, the compound has been used extensively in West Africa to control the blackfly vector of onchocerciasis.

Thus far, however, the most effective means of preventing dracunculiasis has been to provide safe water supplies. Such protected water sources prevent contamination of the drinking water by larvae from infected people, thereby breaking the chain of transmission. Provision of safe water via piped sources and protected bore and tube wells, along with the destruction or conversion of contaminated step wells, successfully eliminated dracunculiasis from large areas in the southern part of the Soviet Union in the 1920s and 1930s. In Nigeria, construction of piped water for a town of 30,000 people in the 1960s reduced the incidence of dracunculiasis from over 60 percent to zero within 2 years. In several other instances, dracunculiasis has been eliminated or drastically reduced as a side benefit of efforts to bring safe drinking water to rural populations who happen to suffer from the disease.

The current International Drinking Water Supply and Sanitation Decade offers a unique opportunity for an attack on dracunculiasis. In the context of the Decade, the provision of safe drinking water is intended for all by 1990. Hence, there is no need to justify providing safe drinking water solely as a means of eliminating dracunculiasis, only to encourage endemic countries to consider this disease when assigning relative priorities to areas where elimination of the disease would occur in addition to other benefits. Indeed, the number of villages in which dracunculiasis is endemic is estimated to be less than 10 percent of all villages targeted to receive safe drinking water during the Decade.