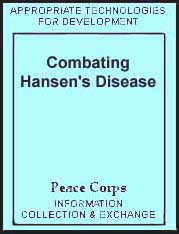 Peace Corps' first volunteers in HD control arrived in Korea on March 25, 1974. Led fearlessly through the complexities of the control effort mainly by those never in the field, and continuously buoyed by assurances that HD and TB control were "just alike", the first group arrived at site in mid-June and quickly realized they didn't know the first thing about their assigned work. The subsequent experiences of the next two groups obviated the need for some type of training/field materials including at least technical material about HD and patient management Korea-specific organizational materials and technical language materials. Though not a detailed chronicle of the difficulties and hard won insights of past volunteers, this work is an attempt to meet the needs of PCVs in the field.

This was first meant to be a training/field manual, but viewing it in its completed form, gaps in materials demands it be called (with no false modesty) merely "field notes." These notes are presented in all humility, with apologies for lapses in logic and grammar, the aftermath of the author's two years in country. I sincerely hope that the short comings of my work will not discourage field workers to the point of abandoning what's here, but rather will inspire them to submit new sections or rewrite old ones as their field experience and interest lead them. What is here is by no means a finished product, but only the framework on which future generations of volunteers will hopefully elaborate. It is only by such long term, integrated efforts that our contributions to the HD control effort in Korea will be strengthened.

Along these lines, I suggest that in the future someone might take it upon him/herself to expand on what is included herein, or perhaps write new sections concerning:

Korean attitudes toward health in general.

A more complete guide to treatment facilities in Korea

Work seasons in the villages

This, coupled with suggestions in section "Getting Started Research" is only a beginning of possible inclusions. As the above topics indicate, little cross cultural material has been incorporated in these notes. This was not because cross cultural considerations are unimportant (on the contrary, success in one's efforts is more often determined by cross cultural accumen than by technical facility) but was due to lack of time in preparing these materials. Where essential some cultural information has been supplied, but it is minimal,

The contents are arranged as follows

Pertinent Physiology and Immunology names parts of the body and immunological processes of concern in HD, and is presented so as to equip one for deeper readings in scholarly journals etc

HD - Three Perspectives should give a picture of the epidemiological features of HD, the classifications and basic clinical course of the untreated disease, as well as those aspects of the disease which make it public health problem, This section also details the control organization in Korea.

Diagnosis details all of the various symptoms of HD with differential diagnosis as well as testing techniques in Korean and English.

Patient Management is the longest section and deals with registration, chemotherapy, management of complications and insensitive members, as well as follow up and social welfare measures. Each of these subsections includes appropriate technical and language materials.

Co-operating Institutions is a veritable "Who's Who" of county, government, and HC personnel with whom the HD worker could co-operate (TB, Family Planning, New Village Movement, Schools, Army, etc.).

Getting Started is a compendium of suggestions from volunteers of things to do during the first few months at the HC.

Even as this introduction is being written, the scope and future directions of Peace Corps' co-operation in HD control is being reconsidered, and it may well be that the intended readership of these notes may never arrive in country, Not withstanding, I submit them to whomsoever may be interested, confident that they will forgive my short comings, attributing them at worst, to an excessive concern for inclusiveness which outstripped my experience and talent. I further hope that my efforts in compiling these notes will at least in part indicate the trials of those who pioneered in this project: both the volunteers and our Korean counterparts and leaders.

It is therefore with deepest respect for, and happiness in having been able to work with them, that I fondly dedicate these notes to the K-31 HD volunteers and to those Koreans who supported us in our efforts: and who have from the start of this Peace Corps program dedicated their service to those who might come after.