Soil pH and how it affects crops growth

Acidity is caused by hydrogen ions (H+), and alkalinity by hydroxyl ions (OH-). A pH of 7.0 is neutral, meaning that there are equal numbers of H+ and OH- ions. As pH drops below 7.0, the H+ ions begin to outnumber the OH- ions, and acidity increases.

Why Does pH Vary so Much Among Soils?

• Climate and Leaching: As illustrated by Figure 6-1, soils of high-rainfall regions are likely to be on the acid side. That's because a good deal of calcium and magnesium (the main bases in the soil) have been leached away by rainfall. It's a slow process since they're both plus-charged ions, and here's how it works. Acid-forming H+ ions are produced by the breakdown of organic matter and acid parent rocks like granite, and also by using most chemical fertilizers containing nitrogen. Being cations, too, these H+ ions can "bump" some of the adhered calcium and magnesium ions off the clay and humus particles and take their places. Once back in the soil water, the Ca and Mg are prone to leaching. Where rainfall is high, this results in more acid soils.

In contrast, soils of drier regions like the Sahel are more likely to be alkaline or only slightly acid, because less leaching of Ca and Mg occurs where rainfall is lower.

Why Worry about Soil pH Anyway?

Soil pH can have a big effect on crop growth and yields. Most crops will produce satisfactory yields within a pH range of about 5.5-7.5, with a pH of about 6.3 being ideal for most. Some crops like pineapple, coffee, potatoes, and sweet potatoes are especially tolerant of soil acidity. (For more information on crop tolerance, see Table 11-1 in Chapter 11.)

• The tie-up (fixation) of phosphorus is greatly affected by soil pH. Phosphorus is most available within a pH range of 6.0-7.0. (See Chapter 11.)

• Very acid soils can be toxic to plants. Aluminum, manganese, and iron become more soluble as soil acidity increases and can actually injure plant roots at pH's below 5.0-5.5, depending on the soil and type of plant.

• Soil pH affects the availability of micronutrients to plant roots. Except for molybdenum, the other 5 micronutrients (iron, manganese, copper, zinc, boron) become increasingly available to plants as acidity decreases (i.e. as pH rises). Iron and manganese are the most affected and may become so insoluble at pH's above 6.5 that plants can suffer deficiencies (see Figure 6-2).

Salinity and alkalinity problems occur at pH's of 8.0 and above where sodium and other salts are present at levels high enough to be toxic to plants ( see Chapter 12). 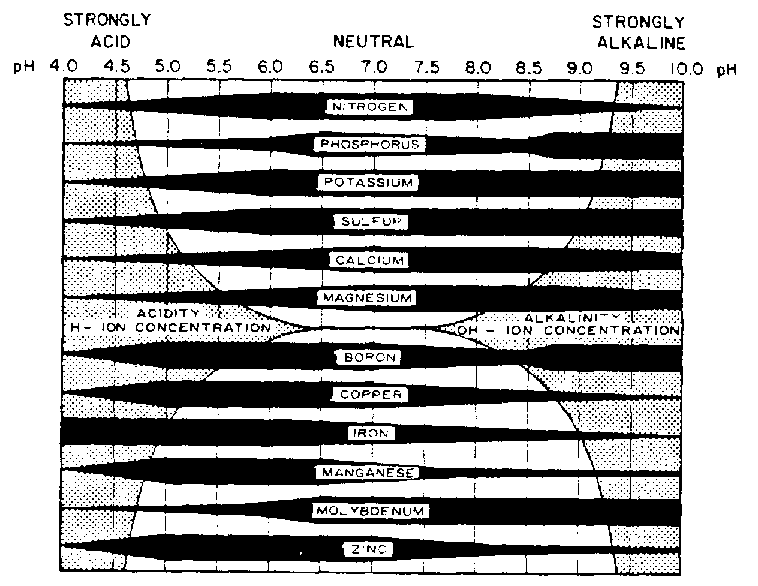 
How can You Measure Soil pH?

Soils labs determine pH as a routine part of soil testing. You can also make fairly accurate readings right in field with a liquid indicator kit or portable electric tester. See Chapter 11 on liming for details.

How Can You Change Soil pH?

Liming will lessen soil acidity and raise the pH. Some common liming materials are limestone (calcium carbonate), dolomitic limestone (a mixture of calcium and magnesium carbonates), and burned lime (calcium oxide). Sulfur and aluminum sulfate can be used to further lower the pH of acid soils "sometimes done for acid-robing crops like blueberries). Gypsum (calcium sulfate or chalk) has no effect as a liming material but can be used to remove sodium (a powerful base) from very alkaline soils, thus lowering the pH toward neutral.

For more information on changing soil pH, see Chapter 11 on liming and Chapter 12 on salinity and alkalinity problems.