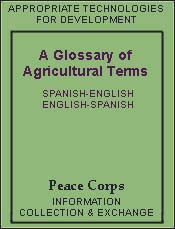 This bilingual glossary is a modest attempt to fill one of the needs of Spanish-speaking agriculturists receiving training under the program of the International Cooperation Administration. The list is not complete in any sense. It is based largely on suggestions made by experts engaged; in the training of foreign agricultural specialists both abroad and in the United States.

Thanks are due to many people in different countries for contributing items and for corrections in the Spanish of the original version. Special recognition should go to Mr. L. LÃ³pez Escoriaza of the Spanish Translation Section of FAO in Rome, and to Mr. Samuel Molinari, of the Organization of American States, in Washington.