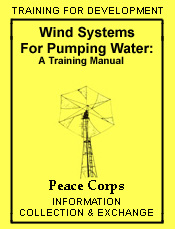 THE FOLLOWING "RECOMMENDATIONS" AND "RECOMMENDATIONS AND SUGGESTIONS" WERE TAKEN FROM THE REPORT ON THE WINDMILL CONSTRUCTION IN-SERVICE TRAINING HELD IN ASUNCION, PARAGUAY, FEBRUARY 14, 1983, TO FEBRUARY 25, 1983, BY WILLIS ESCHENBACH.

In generally, this was a very successful and productive training program. There was great interest from the Paraguayans at all levels. The training was shown three times on local television. A local architect came to nearly all of the training sessions, including the construction sessions, out of his desire to be able to build a windmill on some land that he had in the country. More people were interested in taking the training than we had room for.

In addition, there was excellent support from SENASA, the National Environmental Sanitation Service. SENASA is the technical arm of the Ministro de Salud, The Ministry of Health. SENASA is the Paraguayan agency which is responsible for providing clean water to the isolated villages in the countryside. SENASA gave us the use of their shop in the nearby town of San Lorenzo for the construction phase of the training, and lent us their tools.

UNICEF has given SENASA two well drilling rigs, which SENASA has been using to install wells for small communities. Many of these communities, however, have no electricity; so SENASA has been installing hand pumps in these wells. While this is better than walking, perhaps a few miles, to get water out of a dirty creek, SENASA and the local people are interested in windmills to avoid the work involved.

UNICEF was interested enough in the training to pay 3/4 of the expenses of five of the participants.

The Servicio Forestal, the Forestry Service, is where all of the local trees have been cut down. To further this work, they maintain in partnership with the Peace Corps, nurseries to grow the trees they need. Their interest in windmills comes form the need to water their tress in. the existing nurseries and to expand the areas of the country in which they can install nurseries.

Also, the people of the town where we installed the windmill were a great help. They assisted us in the installation of the windmill, bringing stones and helping lift the tower. They also gave the final dressing to the wind pump for the inauguration, planting sod around the base, hanging flags, and putting potted flowers around the base.

Finally, there was marvelous support from Peace Corps Paraguay. The training was coordinated by Pedro Souza, the Program Manager of the Health Program. He and Joe Kyle, Coordinator for the Health Program, gave freely of their time, energy, and local expertise, especially during the week previous to the training.

1. As difficult as it is, considering cultural and political influences, participating nationals should somehow be screened for their real interest in the technology and its development, and for their work habits. These programs cost time and money, and the interested people should not be hindered or distracted by non-interested, non-active students. Give their places to someone who will benefit.

2. It is important to involve local users of the windpump in the workshop. People from the community were involved, but only in the erecting and' installation of the mill. It would have been better to have at least one person from the community (in addition to their local SENASA agent, who did attend) go to all of the sessions.

3. A process is needed for selecting local people who would benefit from the IST and most of these procedures should be instituted.

4. It might be possible to encourage participation by either limiting participation to 10-12 people or by taking on a larger task (building two mills).

5. The largest difficulty with this IST concerned the installation site. The selection of this site involved political considerations, as did selection of the nationals who participated, as well as the colors each windmill should be painted. For example, two sites in a politically favored area were provided to choose between - neither of these sites were ideal. One of the sites was marginal and the other was poor given the considerations listed in this manual.

Probably what we should have done at that point was to say, "Sorry, neither of these sites will do." Instead, what we said was, "Well, as long as you understand that this is a marginal site and the wind system may not work here, we'll put it in." They said "Yes," they understood, and we went on from there. The situation was complicated by the fact that we told them that it would require a 1-3/4 inch pump to go to the depth of that well (165 feet). They said they had one that they would install, but when push came to shove all they had was a 2-inch pump, too large for that depth.

The outcome was that the mill worked; however, not as well as it should have. It worked and people were happy with it, but it is definitely a marginal installation.

First impressions count for a lot. Introduction of a ''new" technology - even if it is a proven system - can fail if the first steps are weak. In this case the steps have been strong enough, but marginally so. For success in the future the minimum standards for the site should be:

a. That it provide for a basic need of an interested community.

b. That it be a very good wind site.

c. That the site be easily accessible by people from out of the area - high visibility.

6. Tables in the manual could be arranged in a simpler form.

Since 1961 when the Peace Corps was created, more than 80,000 U.S. citizens have served as Volunteers in developing countries, living and working among the people of the Third World as colleagues and co-workers. Today 6000 PCVs are involved in programs designed to help strengthen local capacity to address such fundamental concerns as food production, water supply, energy development, nutrition and health education and reforestation.