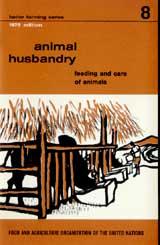 • do not make good use of the grass.

They eat the good grasses first and leave the poor ones.

The good grasses are always eaten before they make seeds, and so they cannot multiply.

On the other hand, the poor grasses which are not eaten grow well and make many seeds. So they multiply and the pasture becomes poor.

• may have accidents and get diseases.

They may go near streams and catch many diseases.

If an animal is bitten by a snake or has some accident, nobody knows about it, and nobody looks after the animal. 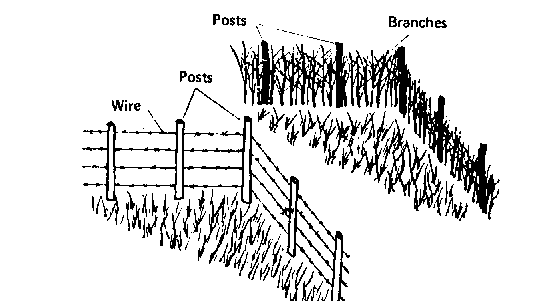 • Near the farmer's house, so that he can watch the animals better.

• On dry ground, on a mound. Wet soil causes diseases. Do not build in a tow- lying place where the rain water collects.

• You can build a shelter without spending a lot of money.

• The animals must be protected from the wind. Build a fairly high wall of earth on the side from which the wind usually blows.

• The animals must be protected from sun and rain. Make a straw roof.

• There must be a door big enough for you to get the dung out easily.

• The shelter must not be too small. 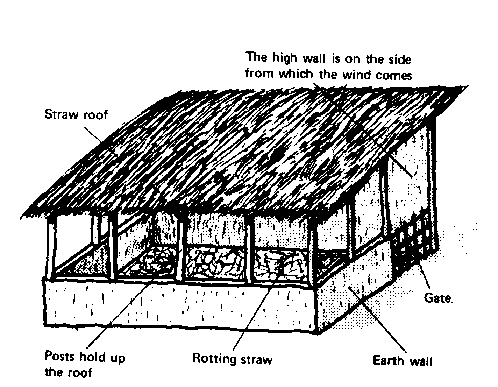 • Along the lower edge of the roof fix a bamboo that you have cut in half lengthwise. You must also take out the little divisions inside the bamboo.

Slope the bamboo slightly,and under the lower end place a drinking trough.

• You must build the shelter in such a way that the wind carries the smell away from the house.

1. It should be large enough to be divided into sections and should have trees for shade.

2. Make a fenced- off section for milking. This allows easier and cleaner milking.

3. Make another fenced- off section for calves to be separated overnight from their dams, but put it near enough to the milking section to avoid milk let- down.

5. The manure pit is shaded. Put it far enough away from both the milking section and the carves' section. 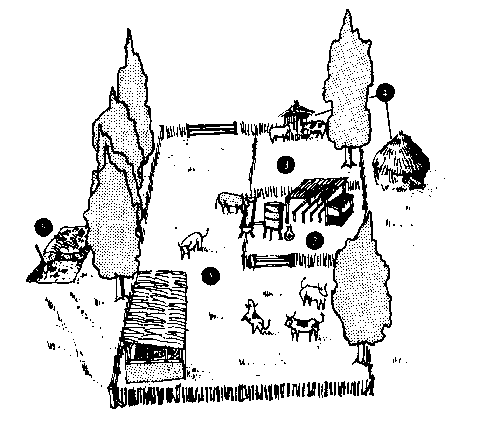