What is agricultural extension?

As agrarian nations, developing countries look to agriculture to stimulate long term economic development. In addition, population growth has kept pace with increased food production since 1960, leaving the world hunger problem unresolved. Inequitable food distribution systems and post-harvest losses maginfy the current food deficit. These issues add up to a crisis and a mandate for agriculture in developing countries.

Being the most numerous agricultural producers, small-farm families are deeply affected by such challenges. The situation is made more urgent by the inaccessibility of agricultural support services. This is due to the pervasive skewing of support services to larger and more productive producers.

Peace Corps Agricultural Extension Workers attempt to alleviate this crisis by reaching out specifically and personally to small-scale farming families in the manner described in this manual. This is consistent with Peace Corps' mandate to help those most in need. Extension workers foster effective two-way communication between farmers and support services in the role of facilitators. They help farmers develop a new sense of COMPETENT AUTONOMY, as they confront together the world that is changing around them.

First and foremost, each farmer and family is individual, uniquely struggling to respond to the various factors which affect their success in the process of adaptation called farming. Despite rich personal, local and regional diversity, however, these people share a number of important characteristics:

They are much more than just farmers. For example, they may be parents, religious or community leaders, masons, carpenters, healers, blacksmiths, truck drivers, etc. In these diverse roles, small-scale farmers participate in complex local religious, social and economic patterns and are subject to a wide range of demands from them. Due to influences from beyond the village, these farmers also have changing aspirations for material well-being, status, etc. Many have changing social identities too, moving from family, village and tribe or region membership toward national citizenship. They all are cultural beings and family members first.

Secondly, these are skilled and experienced farmers. They are experts in the local conditions affecting agriculture. They are practitioners of local agricultural and other technologies (e.g.-hoeing, plowing with oxen, making tools, etc.) In the face of change, they are also farmers in transition between traditional and newer agricultural practices. They are aware of outside inputs and new techniques. They seem to be open to producing a marketable or barterable surplus once family food needs are met.

Finally, small-scale farmers have economic concerns. They participate in local barter or subsistence economies, in which goods are either exchanged among neighbors or grown to be used at home. In these self-contained economies, farmers are not in the habit of investing in outside inputs or of using credit, except for meeting home needs. These farmers are usually limited to the family labor supply, or to d communal exchange of labor among neighbors. Most small-scale farmers operate as if they own or rent their land, as independent farmers, even though some are subject to tribal or community controls or to insecure tenancy.

Small-scale farmers share a village agricultural point of view. It is characterized by:

• A holistic outlook - Agriculture is a central activity, but it is only part of a whole, connected way of life. For example, things which can be contributed to farm work like money and labor are constantly required to meet other family needs as well. The village family allocates these resources by looking at the whole.

• Environmental Sensitivity - All farmers have to be extremely sensitive to their environments in order to survive. They sense from collective and individual observation what elements of the environment are critical to their success as farmers. They are particularly sensitive to cyclical things like rainfall and storm patterns. More than any one else, they know the mini-environments of their individual farms intimately.

• Local Focus - Small-scale farmers especially know a lot about local things and much less about regional, national or global things. Most of these farmers interests are local as well.

• Self Interest - Each small-scale farmer has a list of priorities that helps her make decisions. This list defines a farmer's self-interest, which is a central part of her worldview.

• Farmer's Bias - A farmer's view of things is colored by the physical and economic realities of farm work. These practical preoccupations are uppermost in a farmer's mind.

• Tradition, Fatalism and Adaptability to Change - Carrying out the tradition of farming is a normal and reliable habit of mind. This unchanging habit of mind is negatively reinforced by adverse outside opinions about village people like small-scale farmers. It has also been reinforced by the inability of tradition to contend with the new problems brought on by accelerated change. As a result, one of the extremes of a small-scale farmers point of view is a kind of fatalism and feeling of impotence amid rapid change. The other end of the spectrum is a real, though often latent openness and adaptability to change, for farming is a constant process of successful adaptation. Like other people, small-scale farmers are ambivalent towards change.

For small-scale farmers with all the above characteristics, change is not worthwhile unless it is:

• in agreement with self-interest

"Farming is subject to numerous risks from weather, pests, diseases, price flunctuations and other uncertainties. For the small-scale farmer, these risks are accentuated by her precarious economic condition. Much of a small-scale farmer's supposed conservatium is really a very shrewd attempt to avoid or minimize risk.

For example, Yigi Kamara grows rice in Sierra Leone. Every year, he grows his crop during May to September, the rainy season. In August and September, while waiting for the harvest, the stores from the previous year dwindle, and there is a "hungry season". Yigi plants millet and cassava on a hillside in March and April to deal with this. In order to grow rice year round and perhaps even grow a surplus, Yigi is thinking of building gravity-fed ditches and dikes in a swamp near his hill farm. The work will take four months, from January to May. Is it worth the effort? If he doesn't plant millet or cassava, will there be enough food this "hungry season"? Can he afford a shovel? Will his family be able to harvest, thresh, store and grind all the expected new rice? Can he sell some to make it worthwhile? What will his neighbors say? What about the old stories about the dangers of working in the swamp?

Small-scale farmers like Yigi confront change as individual cultural beings, as practical farmers, and as economic producers. They have considerable resources which they bring to bear on the problems of agricultural production and livelihood in developing countries:

• Openness to producing a usable surplus

• Lack of capital beyond family supply

• Habit of not investing in or using credit or outside inputs.

• Interests and roles which compete with agriculture

Along with these, however, there are factors from beyond the village which also limit the small-scale farmer's ability to deal with change. Most directed technological change, like the promotion of new practices, is based on the priorities and interests of development planners and leaders. This may exclude small-scale farmers or be irrelevant to their needs. Governments, development agencies and private businesses promote change this way. Examples may be mechanization or mono-cropping (cacao or sugar cane) which benefit large-scale farmers and foreign markets more than small-scale farmers.

Like Yigi, these small-scale farmers are the special clients of Peace Corps agricultural extension work. Given the unique nature of the problems they face, their strengths and their limitations, Peace Corps promotes a specific kind of agricultural extension designed especially to help small-scale farming families participate in the development process. 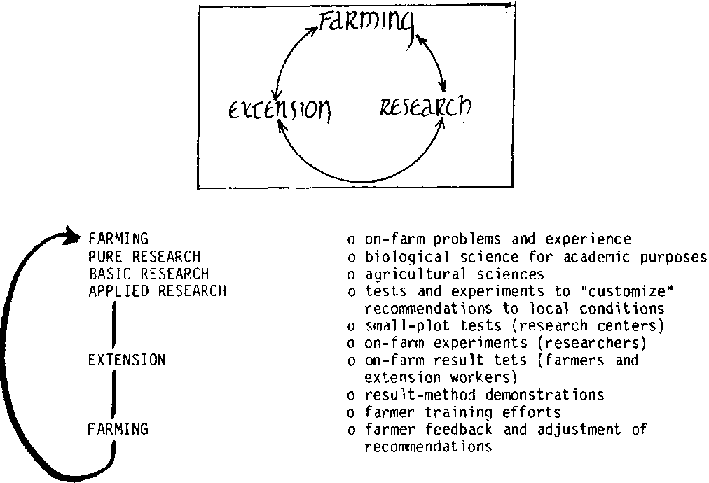