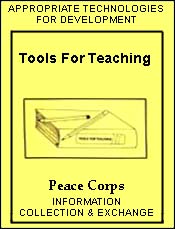 Proper clean-up is one of the most important steps in the silkscreen process. A screen that is well taken care of may be reused again and again. Stencils may be removed and replaced several times before it becomes necessary to restretch the frame.

1) As soon as you are through printing, scrape any excess ink off both the squeegee and the screen.

2) Remove pins from hinges and separate silkscreen frame from baseboard. Replace pins into baseboard hinges so they will not get lost. Set baseboard aside. It should not need to be cleaned.

3) Wash squeegee thoroughly under running water to remove all traces of ink. Shake off excess water and set it aside to dry.

6) Stand the frame on edge at a right angle to your body so that you can work on both sides of the screen at once.

7) Scrub the screen well between the two soaped rags to loosen and dissolve ink particles.

8) Rinse frequently under running water to wash away loosened ink particles. Frequent rinsing will also enable you to check your progress periodically.

9) Repeat scrubbing and rinsing until all traces of ink have been removed. The stencil should remain intact.

10) Allow screen to dry thoroughly before reattaching it to the baseboard.

1) As soon as you are through printing, scrape excess ink from both the squeegee and the screen.

3) Thoroughly saturate a large rag with turpentine and clean squeegee. Wipe dry with a clean cloth.

4) Set frame, screen side down, on several thicknesses of newspaper.

6) For stubborn areas, stand the frame on edge and use two rags soaked in turpentine to scrub both sides of the screen at once.

7) When all the ink has been removed, rinse screen well under running water. Scrub with soap and rinse again. A well-adhered stencil, being lacquer-base, should remain intact.

8) Allow screen to dry thoroughly before reattaching frame to baseboard.

Stencils which have been taped to the screen should be removed and discarded before cleaning the ink from the screen. Blue film stencils are lacquer-base and therefore soluble only in lacquer thinner. A blue film stencil may be removed according to the following procedure.

2) Set frame, screen side down, on several thicknesses of newspaper.

3) Thoroughly saturate a large rag with lacquer thinner and scrub screen well using firm pressure. As the newspaper and rag become soiled with the dissolved stencil, discard the top few layers of paper and exchange the soiled rag for a clean one.

4) For hard-to-remove spots, stand the frame on edge and use two rags soaked in lacquer thinner to scrub both sides of the screen at once.

5) Hold the screen up to the light to make sure that the mesh is clear and clean. You will still be able to see the stencil image because the individual fibers that make up the screen frequently become stained. This is not a problem so long as the mesh itself is not blocked.

6) After the stencil has been completely removed, wash the screen with soap and water. Allow screen to dry thoroughly before reattaching it to the baseboard.