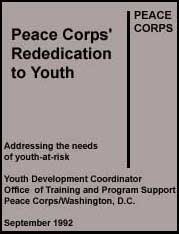 Bokarie is energetic and enterprising At 14, he had more street vending than most of his peers. He started at age five when his mother carried him with her each day to the market where she sold flowers.. When Bokarie was few, his mother was forced to work on the streets after her husband died There were three other children all older than

Bokarie and they too worked on the streets to help the family survive.

Because Bokarie was strong and fast, he was not bullied or abused by older boys on the street He washed cars, carried bags for people in the market, shined shoesanything he could find to do to make money.

When Bokarie was nine his mother died leaving all of the children to fend for themselves During the last five years of his mother's life, street life had separated Bokarie from his brothers and sisters, making life even more difficult Traditionally, they had pooled their resources and shared food, but when their mother died they felt less drawn to return home and eventually ad went their own way.

Bokarie missed haying a home, even the cramped one room house made of cardboard he and his family used to live in near the river. It had at least provided a place to be safe and away from the streets. He had also grown very tired of haying to scavenge, beg and steal to survive when he couldn't find any way to male money. He longed to go to school and someday have a family and home of his own. That seemed a distant dream most of the time, but Bokarie somehow maintained hope through the toughest times on the street

Some street educators from a local organization told Bokarie about a new program they were about to start that would train him in auto mechanics and help him find temporary work while he was in training. But Bokarie was leery of the idea and didn't know if he could trust these guys. He had heard rumors from other boys that this was a ploy by some people to get cheap labor without their really training anyone.

Nobody had ever given him any help before so why would he believe they would now?

But the street educators returned several times a week for several months sitting on the corner, drinking sodas with Bokarie, joking, and talking so him about what he really wanted to do with his life. He began to trust them a little more, if for no other reason than the fact that they kept coming back

He had many doubts. Could he work in a place where somebody supervised him and told him what to do and when? He had only completed the third grade and didn't read very well. He was good with his hands and liked working on cars, but he would have to leave his friends from the street who had become his only family. Finally, he decided he would try the program If the didn't like it, he could always leave and go hack to the street.

Typically youth-at-risk have few employment options in the developing worlds Frequently lacking sufficient education or training, they turn to such jobs as vending, shining shoes, washing or watching cars, carrying bags, begging, stealing domestic help or prostitution. These jobs, with the exception of prostitution, provide meager incomes. Most, if not all, offer little future and have an adverse affect on their physical and mental health. There is a need for skill development, support and love that instills hope, builds confidence and self-esteem, and leads to more substantial employment or entrepreneurship. This is crucial if the cycle of poverty and oppressive and degrading work is to be broken and dignity restored

Youth from the slums, poor neighborhoods or those living on the street, even if in school, generally do not have the opportunities needed to be trained in a skill or trade that will lead to gainful employment. They often lack the sophistication, proper appearance or contacts to find employment with local artisans who could train them. Vocational training programs are too expensive or otherwise inaccessible to these youth. Curricula and teaching techniques are often inappropriate to reach them.

Many local artisans are a potential resource that can provide not only skill training to youth but also the adult support, encouragement and direction that is often lacking in the lives of youth-at-risk. Tapping this resource, however, may not be easy because artisans may have no incentive, feel it is too time consuming or that they don't have the resources, equipment, or expertise to train someone.

An indigenous NGO working with youth-at-risk has received approval from the Ministry of Social Welfare to begin a project that will assist in matching youth-at-risk with local artisans to effect skills training in trades of interest to the youth. The program will focus particularly on hard-to-reach street boys and girls, including prostitutes.

A survey will be conducted of the various zones in the city to assess the number and types of artisans who would be willing to train apprentices for several months. These would include such trades as metal work, shoe making and repair, auto mechanics, carpentry, hair styling, sewing, and embroidery.

The apprenticeships will be accompanied by vocational training at existing vocational education programs run by the government, if such exist and an agreement can be reached. Job counseling skills, work ethics, personal hygiene, numeracy and literacy will be taught, in addition to technical training

As an incentive to the artisan, the NGO will offer technical assistance in marketing, management, bookkeeping, and access to small business loans to assist in improving and/or expanding the artisan's business. A revolving loan fund will be available for both the artisan and the youth to purchase necessary tools The youth loans will be paid back once the youth find permanent employment

Use current Volunteers who have available time to assist the NGO in surveying the zones in the city to determine the number and type of local artisans and assess their interest in and capacity to train such youth.

Provide technical assistance in establishing a revolving an fund for artisans and apprentices.

Assist artisans in establishing apprenticeship training programs and in monitoring and evaluating the training.

Provide job counseling in the areas of work ethics, personal hygiene, numeracy and literacy, and other related job skills training.

Develop teaching material, guides, and manuals for each of the above areas.