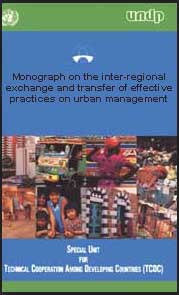 Despite the current urban trends in developing countries, in every city there are rays of hope, most visibly in an outpouring of promising new development programs. The 30 urban practices that are documented in this Monograph are examples of interventions that resulted in significant improvements to the physical. economic and social environment of cities and their inhabitants, and that have the potential for wide-scale adaptation. Summarized from secondary sources, the case studies were evaluated in their own contextual framework.

The case studies describe initiatives that further the goal of making cities more socially equitable, economically viable, politically participatory and ecologically sustainable. They have all been evaluated as initiatives or projects that successfully solved an urban problem, without creating or promoting other unintended problems. In order to screen out policies and projects that benefit only the elite, that pollute the environment. or that are too costly to be replicated on a mass scale, the various case studies have been evaluated for their social equity, ecological sustainability, and economic viability.

To understand what makes a solution successful, it should be evaluated in its contextual framework. The information in each case study was summarized from in-depth analysis of the selected urban solution written by the implementing organization, a research institution within the same city, or by an international agency. The case studies have been edited to follow a consistent format. They describe the background and context, the project description, obstacles, impact and how the impact has been, or could be scaled up.

The case studies attempt to answer the crucial question: "Who has benefited from this initiative?" Some initiatives have provoked structural changes, others have brought immediate results to some people's daily lives, and others have started a transformation process that will take years to mature. Thus, in evaluating the implementation of an innovation, its aims and expectations were considered. Table 3 on page 17 enumerates the criteria used for identifying what made a project effective and innovative and distinguishes among three types of measures: impact. operational, and value-based. Although each case study does not meet all of the listed criteria simultaneously, each fulfills most of the dimensions.

Since the objective of this Monograph is to demonstrate how to increase the impact of micro-scale practices, the examples were also chosen on the basis of their replicability, whether in a similar or adapted form. Those that are too situationally or culturally specific to be useful in another context were not considered.

Table 3 Criteria for Evaluating the Success of Urban Innovations