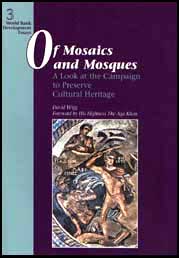 Of mosaics and mosques: A look at the campaign to preserve cultural heritage

Foreword by His Highness The Aga Khan

A fool throws a stone into the sea, and a hundred wise men cannot pull it out.

© 1994 The International Bank for Reconstruction and Development / THE WORLD BANK

Manufactured in the United States of America

The findings, interpretations, and conclusions expressed in this study are entirely those of the author and should not be attributed in any manner to the World Bank, to its affiliated organizations, or to members of its Board of Executive Directors or the countries they represent.

The cover shows a detail from the mosaic of Theseus slaying the Minotaur in the Villa of Theseus, Paphos, Cyprus. Photo courtesy of the Cyprus Museum.

The People behind This Essay

David Wigg has been a foreign correspondent for three London newspapers: The Times, The Daily Telegraph, and The Independent. He is now a writer-consultant at the World Bank. The following people at the World Bank helped produce the essay: Michael Prest, manager of the Development Essays series; Nancy Levine, editor; and Joyce C. Petruzzelli, designer. June Taboroff and A. Graeme Lee read the text and commented on it. Alexander Shakow, director of the Bank's External Affairs Department, and Timothy Cullen, chief of the department's Information and Public Affairs Division, gave support to the series. John Maxwell Hamilton, formerly of the Bank and now of Louisiana State University, Baton Rouge, conceived the series.

Of mosaics and mosques: a look at the campaign to preserve cultural heritage / David Wigg.