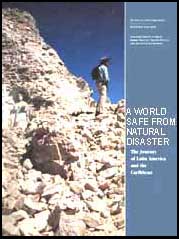 During the last 100 years, earthquakes of great magnitude and intensity have rocked many countries in the Americas. Earthquake magnitude, first defined by Charles Richter, is a measure of the strength of an earthquake as calculated from records of the event made on a calibrated seismograph. The Richter scale is used to describe an earthquake's magnitude. In contrast, earthquake intensity is a measure of the effects of an earthquake on structures and the earth's surface at a specific site. Among the many existing scales, the Modified Mercalli Intensity Scale of 12 degrees, symbolized as MM, is frequently used.

Most earthquakes in the Region have been caused by the interaction of active tectonic plates (see Figure 3.1). The Cocos plate, for example, subducts or dives beneath the lighter American plate. On 19 September 1985, the Cocos plate snapped at a depth of 20 km, and seismic waves devastated Mexico City more than 350 km away. This sort of activity, the subduction and collision between the continental and the Cocos, Nazca, and Caribbean plates, is responsible for the extensive seismicity along the Pacific coast of Central and South America and in the Caribbean Basin. The earthquake that hit northern Peru on 31 May 1970 killed an estimated 67,000 people. Entire villages, such as Yungay and Ranrahirca, were buried in the avalanches and mud-slides that were triggered by the tremor. An estimated half million people were left homeless. 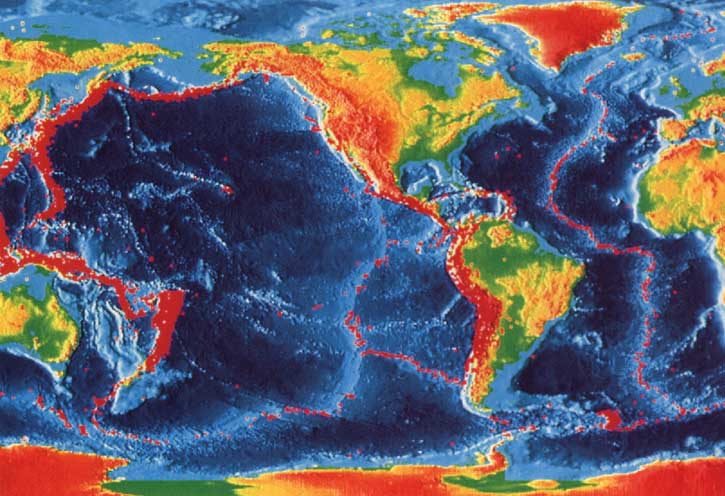 In Central America, the Cocos and overriding Caribbean plates are broken into distinct segments which are characterized on the earth's surface by structural depressions full of volcanic and alluvial sediments. The richness of this soil has attracted dense human settlements to spring up, precisely in those places most prone to seismic activity.

In 1972 most of Managua, the capital of Nicaragua, was destroyed by a 6.2 magnitude earthquake, leaving 10,000 dead. In 1976, 23,000 people perished in an earthquake in Guatemala; nearly 90% of the buildings in the central part of the country's high mountains were destroyed or seriously damaged. The collapse of unstable slopes, where thousands of people of limited resources lived, caused most of the deaths in Guatemala City. In March 1985 an earthquake took place in central Chile which measured 7.8 on the Richter scale with its epicenter on the coast near Alzarrobo. This event affected an area where 50% of Chile's urban population is concentrated; 180 lives were lost; 2,575 people were injured; and nearly 84,000 homes were totally destroyed. In El Salvador in 1986, a 20 square-block area in downtown San Salvador was completely destroyed, claiming more than 1,000 lives.

Tsunamis are caused by earthquakes, volcanic activity, and landslides on the sea floor which generate enormous waves. Because of the length, depth, and velocity of these waves they are difficult to detect and monitor.

About 80% of tsunamis occur in the Pacific Ocean, but there have been significant events in the Caribbean too. In 1692, 3,000 people were killed by an earthquake and tsunami at Port Royal, Jamaica. As the result of an earthquake off the Virgin Islands in 1867 and the 1918 Puerto Rico earthquake, tsunamis did extensive damage. Tsunamis present a real threat to islands that make a substantial living from tourism along their shores and for countries like Guyana and Suriname that are below sea level. One of the most serious tsunamis in recent history was one set off by the 1960 earthquake in Chile. It not only obliterated fishing villages in Chile, but caused the deaths of hundreds in Hawaii, Japan, and the Philippines. In 1992 a 7.2 magnitude earthquake off the western coast of Nicaragua generated waves over 10 m high that left 116 dead and over 40,000 homeless (see Box 3.1).

For centuries, those who have inhabited the Americas have been well aware of the hazards posed by volcanoes. Guatemala, for example, is known as the country of lakes and volcanoes, but this nickname could be applied to other countries in Central America, the Caribbean, and South America as well. As far back as colonial times, El Salvador's Izalco volcano was called the "Lighthouse of the Pacific." Yet although there are numerous active volcanoes in the Region, destructive volcanic eruptions have been less frequent than other types of natural disasters in this century.

In 1902, three major volcanoes erupted with great force in the Caribbean and in Central America. The tragedy began with the explosion of Mount PelÃ©e in Martinique that discharged a dense emulsion of incandescent lava and boiling gases that ran downhill to the port of St. Pierre. Thirty thousand persons were suffocated. Twenty-four hours later, the SoufriÃ¨re volcano on the neighboring island of Saint Vincent, 150 km away, erupted in a similar manner, causing the death of 1,500 people. Later that same year, the Santa Maria (Santiaguito) volcano in Guatemala, took the lives of 6,000 people. Three quarters of a century later, in 1979, the SoufriÃ¨re exploded again, causing extensive damage and making communication impossible between the northern and southern parts of the island of Saint Vincent.

In March 1982, the Chichonal volcano in the state of Chiapas in southeast Mexico came to life with a tremendous explosion that launched a column of ash and gases 15 km high. Several days later, there was an even more violent eruption. Pyroclastic flows demolished the village of Francisco Leon and other nearby towns, damming up rivers and streams and forming lakes of boiling water. When one of these natural reservoirs opened, the banks of the Magdalena, Syula, and Grijalva rivers overflowed. An estimated 1,770 lives were lost as a result of this eruption.

After a prolonged period of inactivity, an exceptionally violent explosion of Costa Rica's Arenal volcano in 1968 launched rocks upon a nearby village, claiming 64 lives. Between 1963 and 1965 the IrazÃº volcano, southeast of the capital of San JosÃ©, discharged such a large quantity of ash that the coffee crop and the country's economy in general were seriously affected.

Presently six volcanoes in Nicaragua - ConcepciÃ³n (Ometepe), Santiago, Momotombo, Pylas, Cerro Negro, and Telica - are in varying states of activity, from the emission of gases to the explosion of ash accompanied by lava flows. The eruption of the Cerro Negro volcano in 1992 spewed ash over a 200 km radius.

In South America, most of the volcanoes that erupted in past centuries were too far removed from densely populated areas to cause much havoc. However, the eruptions of Cotopaxi (Ecuador) in 1877 and Villarica (Chile) in 1936 melted large volumes of ice and snow that caused avalanches affecting vast urban and agricultural areas. The case of the Nevado del Ruiz volcano in Colombia was similar (see Box 3.2). The eruption of the Mt. Hudson volcano in southern Chile in 1991 affected some 62,000 people and caused serious damage to livestock and agriculture in Chile and Argentina.