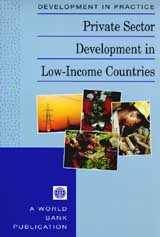 1995 The International Bank for Reconstruction and Development / THE WORLD BANK

The Development in Practice series publishes reviews of the World Bank's activities in different regions and sectors. It lays particular emphasis on the progress that is being made and on the policies and practices that hold the most promise of success in the effort to reduce poverty in the developing world.

This book is a product of the staff of the World Bank, and the judgments made herein do not necessarily reflect the views of its Board of Executive Directors or the countries they represent.

IN response to a request by the Deputies of the International Development Association, this report assesses the progress of private sector development in low-income countries, particularly in Sub-Saharan Africa, during the IDA 9 and IDA 10 periods (from 1987 onward). It identifies causes of uneven performance and outlines the main elements of a strategy—led by the private sector—for accelerated and shared growth to reduce poverty.

Private sector development contributes to poverty reduction in two ways. First, it enhances competitive forces and competitiveness, which produce growth and jobs. Second, through divestiture of activities that the private sector can do as well or better, it allows governments to reduce waste and gain the fiscal space needed for greater investments in the social sectors and infrastructure. Those investments are "income equalizers" that provide skills and services required by the private sector to compete in today's skill-based global economy.

Though pivotal, private sector development is only part of an overall strategy for sustainable development that embraces such other elements as health, education, infrastructure, and environmental protection. These topics are treated in other periodic and special reports, including "A Continent in Transition: Sub-Saharan Africa in the 1990s."

This report argues that for private sector development to promote accelerated growth, progress on the macroeconomic front has to be buttressed with structural and institutional reforms to:

• Reduce the drain of public enterprises.

• Increase the supply and quality of human resources and physical infrastructure.

In many countries, public enterprise losses are on the order of 8-12 percent of GDP. They absorb most domestic savings in Sub-Saharan Africa and are 2-3 times government spending on health and education. But for these losses, real per capita GDP growth in reforming African countries would have been 3-4 percent a year instead of only I percent. Public sector inefficiencies have limited job growth and in the process deprived a large part of the population of the benefits of reforms—undermining the political support for difficult structural changes needed to compete in a global economy.

This report calls for faster and more widely shared growth. How? By shifting from preserving jobs in a public sector that has failed to generate productive employment to creating jobs in a vibrant private sector. Only with such a shift will it be possible to absorb new workers, the unemployed, and those losing employment as a result of public enterprise and civil service restructuring. But it will require a fundamental change in the role of government—from owner and operator to policymaker and regulator that works closely with the private sector to develop a competitive, outwardlooking economy. Success will depend on a major sustained effort to develop agile, competent, and respected public institutions.

• Establish a more favorable business environment to promote competition and reduce risk and the high cost of doing business, which have especially stunted the growth of firms in the informal sector and small and medium-size enterprises. This means pressing ahead on an array of policy, legal, regulatory, and institutional reforms in partnership with business and labor.

• Go farther and faster on public sector reform by privatizing the utilities and the largest enterprises—and by liquidating major lossmakers. Employing only a small fraction of the labor force, these enterprises preempt a large part of government expenditures and account for a large part of the losses of the banking system. Failure to deal with these losses threatens the reform program and diverts resources from pressing social needs.

The fiscal space that this opens should be used first to help maintain macroeconomic stability, and then to expand investment in human resources and physical infrastructure, particularly in rural areas (where more than two-thirds of the people in low-income countries live). It would also help finance social safety nets and targeted programs to deal with the transitional costs of privatization and civil service retrenchment.