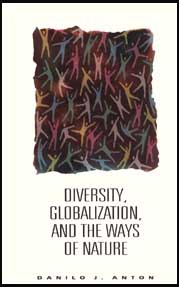 These environments are characterized by multilayered vegetation reaching maximum heights of 40 to 60 metres. Nutrients are mainly stored in living biomass, rather than in the soil. Because of this, when vegetation is removed, the chances of the system recovering to its former state are limited. In addition, microclimatic changes - such as decreasing humidity, increasing temperature, and wind variations - can produce dramatic effects and make germination or regeneration of most native plant species difficult or impossible. Soil erosion, which is negligible under forest cover, increases radically when vegetation is removed. This further reduces the potential of the ecosystem to recover.

In brief, these modifications - loss of nutrients, deterioration of air and soil microclimates, and soil erosion - bring about a complete change of the whole ecosystem. When such a change occurs in a 1- or 2-hectare plot, the system may recover. However, when the deforested area measures tens or hundreds of square kilometres, the process may be irreversible.

In Africa, forests are mainly removed for two reasons: they are cleared for new farmlands and they are cut for lumber and firewood. When old-growth forests are eliminated, productivity of the soil decreases because of nutrient losses. In most cases, the decrease in fertility is so great that even applying fertilizers does not result in competitive agricultural activity. For poor farmers, fertilizers are unaffordable, except in rare cases where natural fertilizers or phosphate rock are available locally. Often, the only practical way to increase production is to clear more forest area for cultivation.

In earlier times, shifting cultivation from one small plot to another allowed the ecosystem to recuperate. With increasing population density and encroachment of commercial plantations, however, recuperation has become impossible, and the forest ecosystem disappears completely, with the consequent loss of bio- and cultural diversity and water resources. Such pressures are causing African forests to retreat at a sustained rate.

In the 20th century, the main culprits have been commercial crops, such as bananas, oil palms, rubber, and cocoa. In Nigeria, oil palm plantations have replaced forests over large areas, particularly in the eastern regions of the country. Coupled with the rapid growth and concentration of the population, this has left little forest remaining. In Cote d'Ivoire, about half a million hectares of forest are cleared annually to make room for cocoa, coffee, and other food products. From an area of 14 million hectares in 1956, the forest had been reduced to less than 5 million hectares 30 years later. The export of commercial crops and lumber explains the relative success of the country's economy in the short term; however, its unsustainability is evident.

In Southeast Asia, the originally extensive rain forests have been greatly reduced. In Burma, Indochina, and Thailand, forests have been replaced by farms and plantations. The forests of the more densely populated Indonesian islands (Java, Madura, Lombok, and Bali) have been logged or burned to the point where there are few remaining relics. As a result of deforestation on fragile soils, erosion has become a serious and widespread problem. In Java, annual erosion rates ranging from 10 to 40 tonnes per hectare have been reported. Recently, the drive toward deforestation has affected some areas that had remained untouched in Peninsular Malaysia, Sumatra, Mindanao (Philippines), and other less-populated islands of the region.

Large tracts of forest can still be found in Borneo (Kalimantan), New Guinea, and Celebes (Sulawesi). The Indonesian government attempted to promote settlement on these islands to alleviate the problems associated with the extremely high population density in Java (nearly 900 people per square kilometre). The initiative produced mixed results. To some degree, it relieved the population pressure in lava (although only temporarily). At the local level, however, the effect was disastrous. Large areas of rain forest were destroyed and the native people on the islands were displaced from their land. Javanese are alien to New Guinea and Borneo; the traditional cultures of these two large islands have been profoundly affected, and the process still continues.

The situation on Borneo is particularly complex. It belongs to three countries: unevenly populated Indonesia, a large multi-island country; oil-producing Brunei, which is small, rich, and densely populated; and the Malaysian states of Sarawak and Sabah. Deforestation and the annihilation of wildlife are still going on at a fast rate in the Indonesian part of Borneo, where settlement strategies have compiled a very poor record.

In Malaysia, until recently, authorities were not concerned with the preservation of the natural rain forests. In 1991, a Malaysian minister was quoted as saying: "It is not our business to supply the West with oxygen" (Economist 1993c). This attitude has changed somewhat. In October 1993, however, a major business deal was announced by a large company (owned by the Minister for Environment and Tourism) that involved a logging concession on 200 thousand hectares of rain forest, along with a coal mine and other components. Sarawak forests produce 80% of Malaysia's timber-related products, and Malaysian environmentalists predict that Borneo's rain forests will disappear in 20 years.

In other areas - for example, the Philippines, Thailand, and Sabah (on Borneo) - some tracts of rain forest are being conserved and the export of timber has been halted. Deforestation continues, but at a slower rate, mainly as a result of agricultural encroachment.

Until recently, the effects of deforestation were less pronounced in the eastern half of New Guinea (part of the republic of Papua New Guinea) and nearby islands (the Solomon Islands). In the last few years, however, the tropical hardwood timbers of these areas have been stripped beyond the level of sustainability. Francis Tilly, Prime Minister of the Solomon Islands, foresees the disappearance of all commercial timber from the islands in 15 years if this rate of deforestation continues. According to the Economist (1994a), landowners can get as little as $2.70 per cubic metre for their timber. The foreign buyer, however, can then sell this timber for as much as $350 per cubic metre! In the Solomon Islands and Papua New Guinea, most foreign logging companies are of Malaysian origin, escaping the increasingly tight controls on logging in their own country.

During this century, settlement of the Amazon has accelerated, mainly as a result of government policies promoting agriculture, cattle-raising, and logging in the region and bolstering a legal system that clearly favoured forest-clearing. A key element in this system was land allocation based on the concept of "squatter's rights"; title was awarded to whoever could demonstrate occupation of the land for a given period. Because occupation could be demonstrated by partial or total deforestation of the land to be claimed, systematic and widespread clearing of land for cultivation or speculation ensued.

Later, particularly after the discovery of the Serra Pelada gold deposits, mining activities developed, resulting in widespread degradation of the natural landscape and water resources. Gold was mined in open quarries, in mines, and in alluvial placers throughout the region, such as Mato Grosso and the Madeira River. Simultaneously, a number of other large-scale mining concerns, such as the iron and tin mines of Carajas, gradually spread throughout the region.

Another factor in the loss of forest habitat relates to the construction of large hydroelectric complexes, such as the Tucurui dam on the Tocantins River (with a flooded area of about 2 thousand square kilometres), the Samuel dam in Rondonia, and others.

In Ecuador, the main problems resulted from petroleum exploitation. Frequent spills in the Ecuadorean oil fields have had a critical effect on the environment. One of the largest spills took place in the region of La Joya de los Sachas, affecting the Napo River basin (Varea 1992). Similar spills are frequent in Colombia, where the main oil pipelines are frequently attacked by guerrilla forces.

Significant effects of deforestation have been described by Salati and Nobre (1991) based on an empirical model developed by Shuttleworth (1988). From September 1983 to September 1985, about 10% of the rainfall in the study area of Salati and Nobre was intercepted by the forest canopy, accounting for 20 to 25% of the evaporation. The remainder of the water being returned to the air moved through the trees by transpiration. Over the same period, about half of the incoming precipitation resumed to the atmosphere as evaporation, a process requiring 90% of the energy input. Of net radiation, 75% went into evaporating water and the remaining 25% was used to heat the air (Salati and Nobre 1991). It is estimated that 50 to 60% of the rainfall in the region originates from the recirculated water vapour that arises through evapotranspiration. Thus, a reduction in the forest cover will decrease precipitation, perhaps up to one-half or more throughout the Amazon and in downwind regions, such as the Bolivian altiplano and the eastern slopes of the Andes.

Palaeogeographic studies show that less-humid periods were relatively common during the Quaternary period in the Amazon region. Colinvaux (1989) thinks that these changes were one of the causes of the high level of biodiversity in the area and that they coincided approximately with the glacial period:

The contemporary reality is that much of the Amazon basin will be turned into pasture as people clear the land for cattle grazing.... History does suggest that parts of the Amazon can be exploited productively without causing mass extinction, but wise use must he the overriding theme.

Despite the modifications that the area suffered in previous eras, for the last few thousand years the core of the great forest has remained largely unchanged despite demonstrated human occupation. The production systems developed during that time did not bring about the general degradation that is occurring now in newly settled areas. It is generally accepted that indigenous production systems are sustainable over the long term. Although we are not certain what the forest was like before human occupation, we do know that the current forest ecosystem is the result of indigenous management for several millennia. That management system was based on a careful slash-and-bum technique, where small patches of forest were cleared for planting, used for 3 or 4 years, and then abandoned, allowing the selective growth of new plants. Other areas were preserved as sources of medicinal plants, for example, or simply left alone. Under these management strategies, some areas of the forest were used without affecting their potential, and the rest of the ecosystem was protected, resulting in long-term conservation of local environments. In that way, people took advantage of the enormous diversity of the jungle; rather than attempting to obtain maximum immediate return, they ensured the optimum long-term benefits.