Over the past two decades life expectancy at birth has increased for both men and women in all regions of the world. In industrial countries women tend to outlive men by six to eight years on average: in low-income countries gender differences are much narrower (two to three years). Despite women's biological advantage, female mortality and morbidity rates frequently exceed those of men, particularly during early childhood and the reproductive years.

During the reproductive period the most Important causes of morbidity and mortality among women are high fertility and abortion rates, vulnerability to sexually transmitted diseases (STDS), genital mutilation. and gender violence. Each year, about 500,000 women worldwide die from the complications of pregnancy and childbirth. Maternal mortality ratios for developing and industrial countries vary greatly: the rates in parts of South Asia are among the world's highest, in some cases exceeding 1,500 per 100.000 live births. In Sub-Saharan Africa where the ratio is 700 maternal deaths per 100.000 live births, a woman runs a 1 in 22 lifetime risk of dying from pregnancy-related causes, but in northern Europe the risk falls to 10 in 100,000 (United Nations 1993). In the transition economies of Eastern Europe and the former Soviet Union, the rates are around 40 to 50 per 100,000 live births 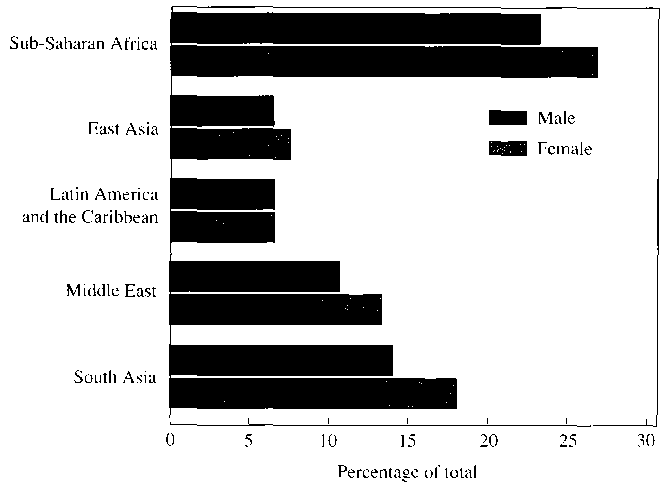 A major cause of maternal deaths is complications from unsafe abortions. Abortion-related deaths are highest in South and Southeast Asia. followed by Sub-Saharan Africa and Latin America and the Caribbean. Lack of access to contraceptives can mean that abortion, is used as a form of birth control. For example, in parts of Eastern Europe and Central Asia abortions are more numerous than live births (World Bank 1994b), and abortion rates were as high as 1.76 per live birth in Russia prior to the transition.

As increasing numbers of women become aware of and learn to use contraceptives, total fertility rates are falling worldwide. The exception is Sub-Saharan Africa where the total fertility rate averaged 6.4 between 1985 have been infected by HIV. The World Health organization (WHO 1994) estimates that more than 13 million women will have been infected by HIV by 2000 and that about 4 million of that number will have died (figure 1.5 In Atrica, where 10 million adults are infected with the virus, ode-half of all newly infected adults are women, and more than 5 million are women of childbearing age. In Asia almost half of all adults newly infected with the virus are women, compared with less than 25 percent just six years ago. 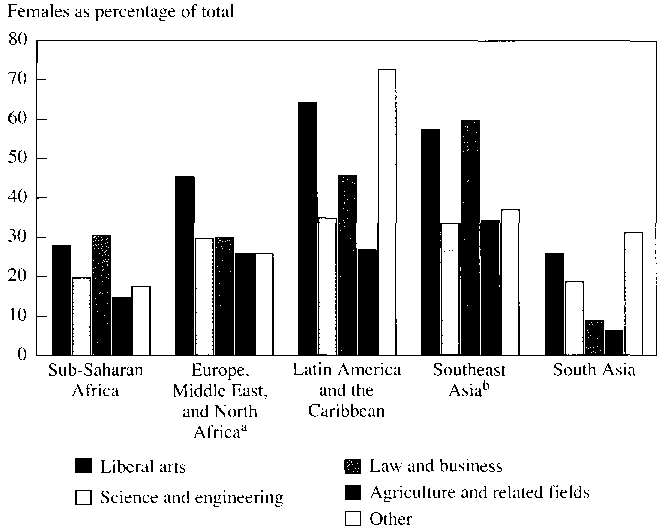 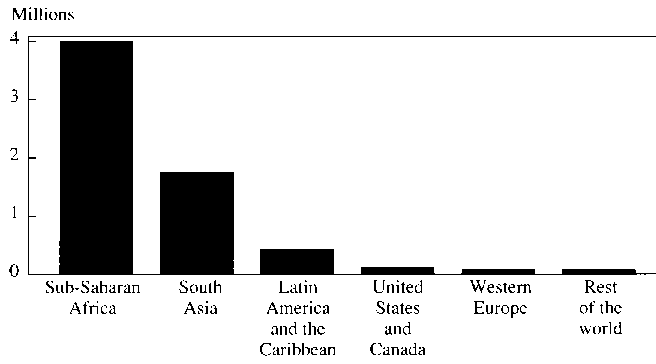 
The mortality risk for females is high during the reproductive years. but it is even higher during infancy and early childhood. Between 1962 and 1992 INFANT mortality in the developing world decreased by 50 percent (UNICEF 1993 However, in seventeen of the twenty-nine developing countries for which recent survey data are available, female children age 1-4 were found to have higher mortality rates than male children. despite girls? biological advantage (World Bank 1994b). In many of these countries the underlying cause of high mortality among girls is the parents' bias toward boys, who receive the best food and medical care.

Genital mutilation, prevalent in twenty-eight countries, is performed on 2 million young girls yearly. The practice leads to long-term morbidity, complications during childbirth, mental trauma, and even death. Table 1.1 summarizes the best available statistics on this practice for selected countries.