Linkages between Education Health, and Nutritious

At the household level. gender differences in access to education are closely related to inequalities in the shares of household education expenditures allocated to boys and to girls This finding stands even though private returns to girls' schooling are similar to or marginally higher than. those to boys' schooling (figure 2.1; see also Schultz 1988: Mwabu 1994). In this case. parental choice reflects the relatively greater restrictions on educational opportunities and employment choices for girls. in comparison with boys. and cultural norms on the appropriate role for girls within the household. 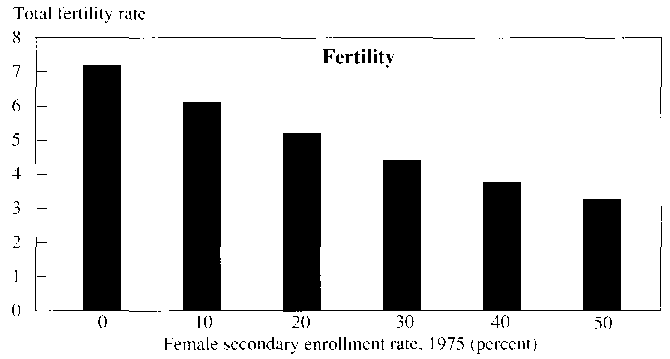 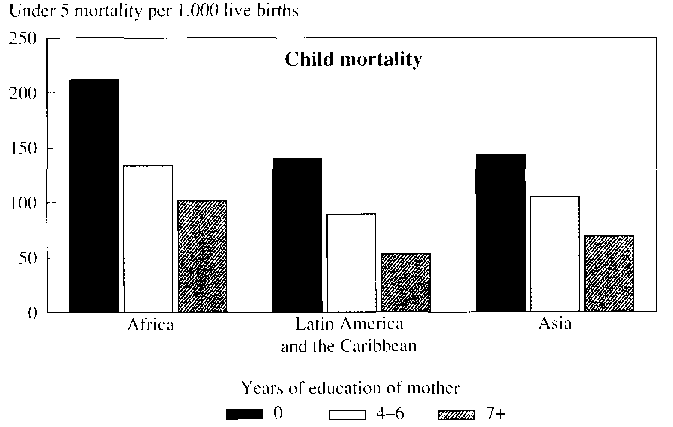 More importantly. the social externalities linked to female education are crucial. Evidence from a large number of countries shows that female education is linked with better health for women and their children and with lower levels (figure 2.2). This link stems from the direct effect of education on the value of a woman's time and consequently. on private returns to her labor. It also stems from the indirect effect of education on the average age at which women marry on their knowledge of basic health care and nutrition, and on reproductive choices (Rosenzweig and Schultz 1982, 1987).

Educating girls and women reduces maternal mortality and fertility rates and increases the demand for health services. A simulation study of seventy two developing countries shows that, with all other factors held constant, a doubling of female secondary school enrollments in 1975 would have reduced tile average fertility rate in 1985 from 5.3 to 3.9 children per household and would have lowered the number of births by 29 percent (Subbarao and Raney 1992. Studies for individual countries have found that one additional year of female schooling can reduce the fertility rate. on average, between 5 and 1 (i) percent (Summers 1994)

Women are more vulnerable than men to micronutrient deficiencies that aggravate poor health (World Batik 1994b). Poor health and nutrition reduce productivity and the chances of reaping gains from investment in education. Intrahousehold inequalities in consumption and nutritional allocations can therefore be a signal of inefficiency Recent estimates suggest that the com effects on morbidity and mortality of just three types of deficiency-in vitamin A, iodine. and iron-could waste as much as 5 percent of gross domestic product (GDP), yet correcting these deficiencies would cost less than 0.3 percent of low-income countries' GDP (World Bank 1994c, pp. 50-51). Studies of women tea producers in Sri Lanka and of women workers in Chinese cotton mills document the reduction in productivity associated with iron deficiencies and the positive effects of in-on supplementation on work and output (Edgerton and others 1979). A study of six villages in Andhra Pradesh, India, found that disabling conditions caused by malnutrition and the prevalence of diseases reduced female labor force participation by 22 percent (Chatterjee 1991).

Physical anti mental abuse can also have deleterious effects on the well-being and productivity of women (table 2.1). Violence against women is widespread in all cultures and cuts across all age and income groups Its consequences. include unwanted pregnancy. infection with STDs, miscarriage partial or permanent disability. and psychological problems such as depression anti low self-esteem. Recent World Bank estimates indicate that in both industrial and developing countries domestic violence and rape cause women of reproductive age to lose a significant percentage of really days. Domestic violence appears to be an example of how the relatively weaker bargaining power of women and the paucity of options for them outside the home can affect the intrahousehold distribution of welfare.

Violence against Women Starts in the Womb and Continues trough Life

Table 2.1 Violence against women through the life cycle

Prospects for gainful employment. as well as the availability of basic social services such as water supply and sanitation. also influence women's well-being. The survival chances of female children in India appear to increase as the employment rate for women rises and the earnings differential between men and women decreases Battilan 1988 Dowry and marriage practices. along with household ownership of land are closely linked to women's chances of survival The effect of such practices cannot be over late. Sen's (1990) comparison of female-male mortality rates in China. India. and Sub-Saharan Africa suggest that more than 100 million women are "missing"

Public spending on social services affects the ability of individuals and households to benefit from their own private spending on human capital. In most industrial countries mortality rates decreased even before modern medical care became widely available, mainly because of improved water supplies and sanitation. The same is likely to hold for the developing world. Public interventions that address market under provision of water and sanitation facilities and shortages of health set-vices such as immunization and family planning-have a significant effect. and one that is probably greater for women than for men.

Lack of data makes it difficult to evaluate the effects of public spending on the educational attainment and health of women and men Very little empirical evidence in this area exists, but there is some indication that the proportion of public subsidies for education that benefits females is lower than the proportion that benefits males. In Kenya in 1992-93. for example. public spending on education amounted to the equivalent of an annual subsidy of 605 Kenyan shillings per capita: males received. on average. 670 shillings and females only 543 shillings. In Mexico the gender difference in public education subsidies was somewhat less: in Pakistan males received almost twice the female subsidy. Gender inequalities in the distribution of subsidies are greater at high than at primary levels. In Pakistan girls receive, on average. only 96 rupees a year for secondary school bag. compared with 58 rupees for boys. Box 2.2 explains how these figures are calculated.

Supply-side differences are partly a function of poorly targeted resources (as. for example, when more is spent on tertiary than on primary schooling). More importantly. they reflect differences in household demand for education for girls and boys. If more girls attended anti stayed in school. the proportion of public subsidy going to girls would he greater.

In health care assessing the incidence of public spending by gender is particularly difficult because of the marked differences in the health needs of women and men. These differences are related to different biological re

The importance of private and public investments in education and health services that will improve women's well-being is cleat. These services at-e also important for another season: these is important evidence that increases in women's well-being yield important intergenerational benefits and productivity gains in the future World Bank Living Standards Measure Study (LSMS) surveys car-tried out in Nicaragua (1993 Viet Nam 1993) Pakistan (1991), and Cote (1988) suggest that the probability of children being enrolled in school increases with their mother's educational level and that (controlling, for income and household size) girls. particularly those in non poor households. are mote likely to attend school if their mothers attended school. Other studies show that households with educated mothers lend to provide children with greater quantities of mote nutritious food often at a lower cost. than households with poorly educated mothers (Thomas 1990b)

Data from Brazil show that giving women more control over nonlabor income has a larger impact on child measures, nutritional intakes, and the proportion of the household budget devoted to human capital inputs than if men had control of this income (Thomas 1993) Other studies indicate that women spend proportionately mote of the income they control on health care for children than do men. Women also spend more on food products (as opposed to such goods as alcohol and tobacco) than men do (Duraiswamy 1992: Hoddinot and Haddad 1992) But fathers education is also important especially in interaction with mothers' education (Thomas 1990a)

Material health (which is linked to education) also has important intergenerational effects. Children of mothers who are malnourished or sickly or receive inadequate prenatal and delivery cat-e face a greater risk of disease and premature death. Iodine-deficient mothers run a greater risk of giving birth to infants with severe mental retardation and other congenital abnormalities than do healthy mothers. Reduced fertility and improved health for women can increase individual productivity and improve family well-being. When good health is combined with education and access to jobs. the result is higher rates of economic growth.