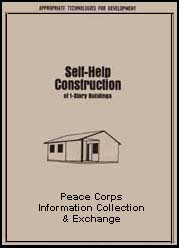 It is a good idea to coat all wood and bamboo roof materials with an anti-termite solution-such as carbonyl, Xylophene, or Creosote.

In areas with very strong winds or storms, it may be advisable to have an experienced local contractor check the roof plan.

To build a flat roof, simply follow the steps below:

• Place the beams across the top of the walls every I-1 meter and lash them securely to the wall-plate with iron straps or staples. Avoid nails through the beams since they may split the wood.

• On the ground, construct the purlins out of sections of 5cm x 10cm wood. Purlin sections should be spliced together, as shown, with the longer piece over the shorter piece. Take care that splices will not be directly over a beam once the purlin is in place. Each completed purlin should be lifted into place and lashed with iron straps to each beam.

• Finally, the roof covering should be attached to the purling. Follow local custom when using materials such as thatch, mud, or tile. Avoid corrugated metal for flat roofs: the metal sheets make buildings very uncomfortable in hot climates and tend to rip off easily in wind. 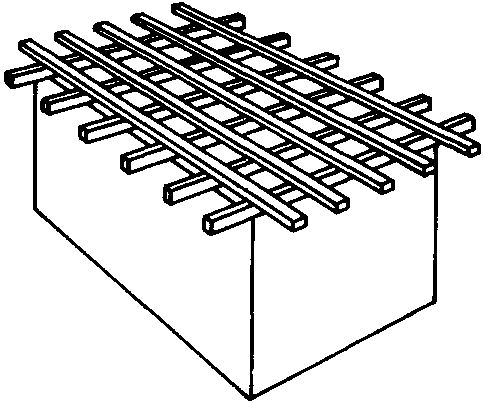 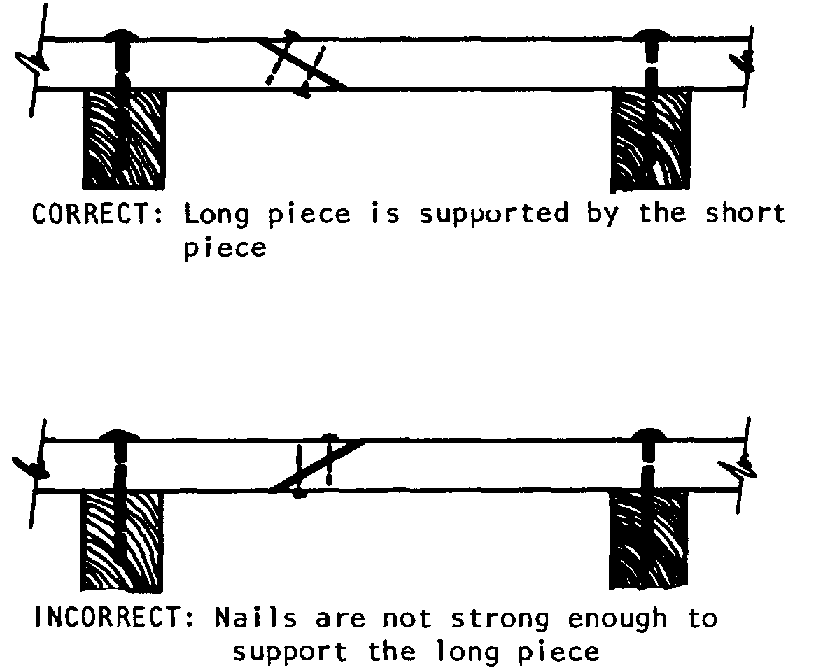 The longer piece over the shorter piece

Simple, beam-supported shed roofs for buildings where one wall is built higher than the other are constructed according to the same procedure for flat roofs. 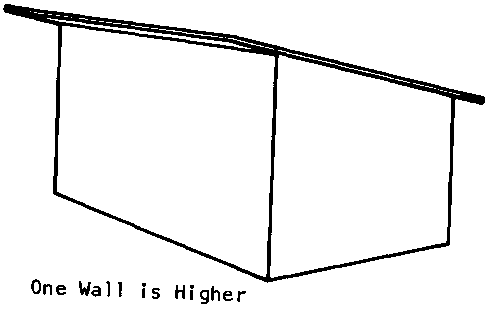 One wall is higher

STEP 1. Place beams across the top of the walls as for flat roofs. However, these beams may be further apart, up to 1.3-1.4 meters, depending on the roof dovering to be used (closer for heavier materials, further for lighter materials). The beams must be as long as the distance between the two walls they will rest on + the overhang planned on each alto.

STEP 2. On the ground, measure and mark off the outline of the truss.

STEP 3. Cut and loosely assemble all the wood sections needed for one truss: the rafter, plus 4 struts. Put stakes firmly in the ground to hold those places in .

STEP 4. Fasten the pieces of the truss together, either by bolting or nailing them.

Whether bolts or nails are used as fasteners, the joints may be made either by overlapping pieces; or, by using single or double plates (separate pieces of wood) to hold the truss members together; or, by splicing. When splicing, use iron straps to reinforce the joint further.

STEP 5. Repeat steps 3 and 4 until a truss has been built for each beam in the roof.

STEP 6. To position the trusses and attach purlins and roof material, follow the instructions for gable roofs below.

To construct a gable roof, follow the steps below:

STEP 1. With a tape measure, mark off the outline of the truss -- the distance from the rafters to the tie beam, from the struts to the tie beam, and so on -- on the ground. Loosely organize the pieces for the first truss along the lines marked and hammer stakes in the ground to hold each member in place.

STEP 2. Check the measurements of the pieces on the ground against the plans and make any needed adjustments; then make sure the stakes are firmly in the ground and won't move.

STEP 3. Assemble the truss with permanent connections as for shed roof trusses using the connections indicated on page 175.

STEP 4. As each truss is assembled, put it up by pushing it over the wall flat, and then raising the point of the truss with a long pole.

STEP 5. Put the end trusses first, bracing them from the ground. Then run a string from apex to apex and align the other trusses with the string. 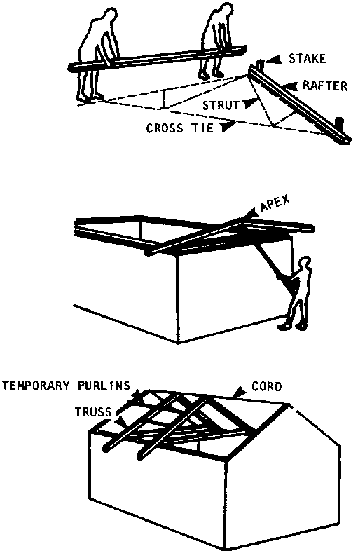 STEP 6. Hold the trusses in place with temporary purlins nailed to each one. Then tie the rafters down to the wall plate with bolts or iron straps. 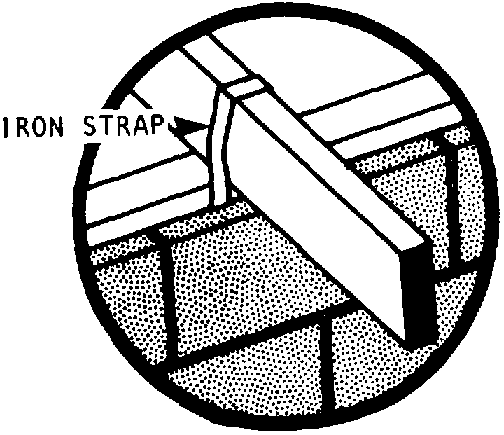 STEP 7. Next, construct the purlins on the ground, rather than on the roof. Stagger the joints in the purlins to avoid sagging in one section of the roof. Be sure that no joints are placed directly over a truss beam: too many nails will split the lumber of the truss.

STEP 8. Attach the purlins to the trusses, starting 20cm from the top of each one. The position of each purlin should be marked in advance by running a string from end-truss to end-truss and placing a nail at the purlin-point on each truss (the nail will keep the purlins from sliding until they have been attached by bolts or iron straps). 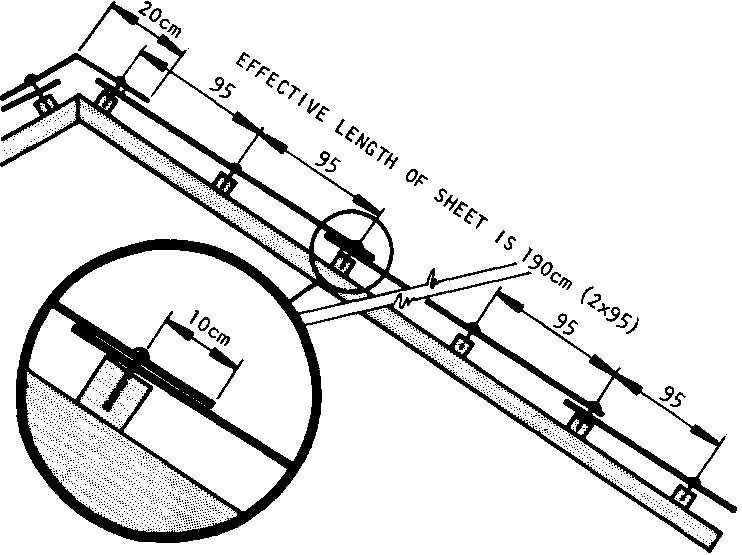 For local roof-covering materials such as tile, mud, or thatch, space the purlins according to local practice. For sheet metal, use the following formula:

Where x = Space between purling,

y = Length of metal sheets, and

10cm = the length each sheet will overlap the one beneath It 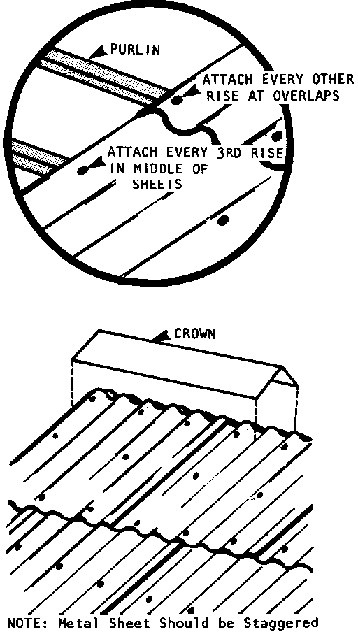 Corrugated sheets should be attached with specially galvanized large-headed nails through the tops of the curves, not in the valleys, of each sheet.

Nail them every third rise in the middle of the sheets.

The nailing should begin at the bottom of the end of the roof farthest from the prevailing wind to minimize wind and rain that will blow between the sheets. For example, if the winds come mostly from the east, begin at the lowest part of the western end of the building.

Stagger corrugated metal covering so that each row of sheets covers the joints of the row beneath. Take care also to stagger the nails so they do not form a straight line along any purlin. Such a straight line might split the purlin underneath.

Patch any small holes in the metal with "Masticon" or a gummed metal tape called "Flashband".

STEP 10. Build a crown to cover the top of the roof by cutting metal sheets lengthwise into 3 parts, pounding each part flat, bending it over the ridge of the roof, and nailing it to the metal sheets and purling. 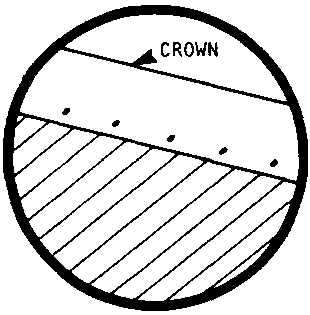 Build a crown to cover