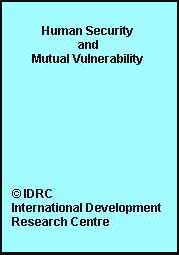 From the previous analysis it is possible to state that the manifestations of the global crisis are visible everywhere: poverty, violence, famine, the spread of life-threatening diseases, severe environmental deterioration, more personal insecurity and a decaying quality of life (Kaplan, 1992). As indicated throughout this essay, these dysfunctional manifestations are interconnected. For those involved in development studies, the symptoms are well known: they are all associated with underdevelopment. In other words, a pronounced trend toward de-development is manifesting itself on a global scale: once-advanced societies are decaying rapidly, while communities elsewhere are dying of modernization. Four basic observations relating to the crisis can be formulated.

1. The present global crisis is an accumulation of multiple and self-reenforcing dysfunctions. All these have configured a crisis of security with implications that go beyond conventional issues of maintenance of "order" and "stability," as well as peacekeeping. It is impossible to talk about national security as separate from global security. The analysis undertaken in the previous sections clearly indicates that, despite the end of the Cold War, human security has diminished throughout the globe. The abovementioned crisis is, in essence a symptom of a decline of modem civilization.

2. Central to the global security crisis, is a crisis of the conventional and commonsense solution for crisis management: growth (an antithetic view to the Club of Rome, arguing instead for socioeconomic and political limits is contained in AmÃ­lcar Herrera et al. 1973). Current rates of economic expansion are either stagnant, negative, or at best, much lower than they have been in recent decades. Incremental accommodations based upon increases of wealth and income are less likely. Moreover, as discussed earlier, it is now painfully clear that the growth of wealth does not necessarily mean an automatic decline in poverty. In fact, with extremely skewed existing pattems of accumulation, poverty - even in the midst of the "prosperity" of the 1980s - has been expanding much faster than wealth has. More fundamentally, not only have growth strategies failed to eradicate staggering problems, but the logic of growth itself becomes the common root of the problems it was supposed to solve (Meadows 1974).

3. Until not long ago, developmental dysfunctions, related to inadequacies of growth, equity, or both, were solved by the rich and more powerful countries of the centre by exporting - or "dumping" - their contradictions into their peripheries, whether colonies, neo-colonies, or intemal colonies. With growing interdependence, this strategy for crisis management is no longer rational, although it is still done. It is increasingly clear that the mounting problems of the periphery have also transformed themselves into problems for the centre and are beginning to flow upstream. Neither can malfunctions be contained within the protective shell of territorial sovereignty, nor can their transfer abroad be justified by the usual "better them than us." What we have instead is the demise of sovereignty and the emergence of mutually assured vulnerability, where the insecurity of the whole is contingent upon the malfunctioning of its weakest link.

4. The sources of the crisis as well as the possibilities for arresting its causes and symptoms are to be found in the cultural software that created and reproduced the present impasse. However, functional practices can and must be generated from the current dysfunctional conditions. Policy alternatives are both necessary and possible. In this sense, changing cultural practices through learning (Childe 1958), invention and innovative thinking, may hold the key to alter an otherwise destructive course. As sectors within industrial societies are also falling victim to underdevelopment, the "periphery" cannot any longer be ignored by ways of deconstructive metaphors of inherent fatalism or ethnocentric recourse to "inferiority." Contrary to commonly held stereotypes, it has been the North rather than the South that for most of its history has remained parochial. This mental isolationism - an inability to "see" - was an expression of what US Senator J.W. Fulbright (1966) used to call the "arrogance of power." But it has been, and continues to be, also an arrogance of technology, wealth and culture, based on plain ignorance. Exogenous new ideas and cultural strains have the potential for increasing the global capacity for analysis and problem-solving. Global learning is, in this context, a necessity for human security and survival.

There is no sound theoretical framework yet to structure a body of knowledge that, using the enormous amount of existing experience, will be able to create the appropriate kind of policies to overcome the crisis. Conventional development theories and practices are still concentrating in old ideas of "national development" or "national security." There is a need for a new paradigm that takes into consideration the mutually dysfunctional traits of the present world system and looks at the inextricable and contradictory relationship between development and underdevelopment as global phenomena, more connected to concrete social relations than to abstract territorial categories.

Development theory as a whole, whether radical dependency or conventional modernization, for all their differences has shared one common premise: that development (or underdevelopment) flows from the North to the South. Even the attempts to talk about "dependency reversal" Ã  la Modelski (1983) concentrate mostly on "functional" trends with emerging symmetries and in fact correlate strongly with Euroamerican-centred views, not with critical and less ethnocentric perspectives. Interdependency is a re-invention of modernization and structural-functionalism at its best. For this posture (one also shared by the former socialist world) the centre had and was the solution; the periphery had and was the problem. The greatest failure of modern social sciences has been their inability to examine Western societies with a critical light (Pye 1975). Mainstream development studies and area studies, with their counterinsurgent roots, were meant to study "them," "down there" in the South; not to address the mounting dysfunctions of the world system controlled by developed societies. The many problems that plague industrial and post-industrial nations have been defined out of existence by the logic of theoretical reductionism and misconstrued comparisons.

The predominant theories of international relations - whether conservative "realism" (power politics) or the notion of "complex interdependency" (Keohane and Nye 1975) of the neoliberals and the Trilateralists - have not been able to extricate themselves from acritical ethnocentrism. "Realism" was caught on an entangling East-West myopia, where the South was just an arena for confrontation, prone to be "subverted" by the other side. Complex interdependency (Spero 1977), while recognizing a North-South dimension in international relations puts too large an emphasis on lofty terms such as mutuality, cooperation, global integration and market forces, trivializing the more dysfunctional, asymmetrical and exploitative interactions among and within centres and peripheries. Despite its de-emphasising the instruments of war, complex interdependence is extremely culture-bound and unidirectional. In this sense, the approach is based on the same diffusionist premises of modernization theory (Stavenhagen, 1968). It is an ideology that serves the practical economic and ideological interests of the globally integrated elites and provides justification for the status quo: the existing international division of labour, the role of the GATT, the IMF, the World Bank, the centrality of transnational corporations and the Group of Seven.

So far global problems have been analyzed from an exclusively American or Eurocentric, not a geocentric prism. Cultural messianism has contributed in no small manner to maintain a condition of global underdevelopment and insecurity. However in the midst of the current crisis, the established flow of information, ideas, science and worldviews is being shattered. There is a "window of opportunity" to bring new voices and perspectives into the debate. This is not, as some cultural supremacists suggest, "contamination," or "the end of civilization as we know it," but perhaps a chance for a cultural synthesis to examine the crisis in a concerted and truly global way. It should be remembered, as is becoming increasingly clear to our unemployed graduates, that living in a situation of underdevelopment is not synonymous with being underintelligent (Dwivedi et al. 1990). If there is a point to break the present cycle of self-reenforcing dysfunctions, this is in the area of cultural autopoiesis (Maturana and Varela 1980). This modification in the chains of signification in the development discourse (Escobar, 1986) has the potential to set the stage for a new vision of a truly global, although heterogeneous, civilization: a new universalism. The trademark of this emerging renaissance, if it is to take place, will have to a pluricultural global consciousness, rich in texture and diversity. In the shorter run, a fresh way of looking at the world could offer the kind of analysis, and policy prescriptions, capable of breaking the present cycle of self-reenforcing dysfunctions.