It has been argued1 that governments and large development agencies tend to adopt a 'top-down' approach to disaster mitigation planning whereby the intended beneficiaries are provided with solutions designed for them by planners rather than selected for themselves. Such 'top-down' approaches tend to emphasize physical mitigation measures rather than social changes to build up the resources of the vulnerable groups. They rarely achieve their goals because they act on symptoms not causes, and fail to respond to the real needs and demands of the people. Ultimately they undermine the community's own ability to protect itself.

An alternative approach is to develop mitigation policies in consultation with local community groups using techniques and actions which they can organize themselves and manage with limited outside technical assistance. Such community-based mitigation programs are considered more likely to result in actions which are a response to people's real needs, and to contribute to the development of the community, its consciousness of the hazards it faces and its ability to protect itself in the future, even though technically the means may be less effective than larger-scale mitigation programs. They will also tend to maximize the use of local resources, including labor, materials and organization.

Applying such community-based policies depends on several factors - the existence of active concerned local community groups and agencies able to provide technical assistance and support at an appropriate level, for example, are crucial to success.

Nevertheless, opportunities for community-based mitigation actions should always be sought in developing a comprehensive mitigation strategy. They will certainly be cheaper and may be more successful than alternative larger-scale programs. 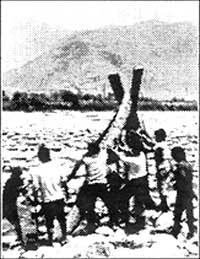 Community-based mitigation strategies tend to maximize the use of local resources; materials, labor and management.