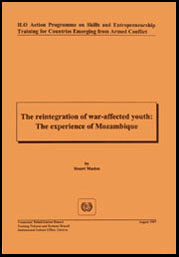 Shortly after independence was achieved in 1975, Mozambicans became embroiled in a savage internal struggle between the government of FRELIMO and the armed opposition group of RENAMO. The struggle was to last 16 years and to cost hundreds of thousands of lives. Against this backdrop of savagery, millions of children and youth have grown up in Mozambique knowing little else but the horrors of war. For Mozambican youth living - and dying - in the midst of armed conflict, the choices were clear: fight; flee; or risk life, limb and liberty trying to eke out a meagre existence amid the minefields and madness. The present study examines the experiences of Mozambique in providing vocational skills training and employment to war-affected youth as part of the reintegration process. The research for this paper was undertaken in Maputo, Manica and Sofala provinces in Mozambique during a three-week period in December 1996.

Although it can sometimes be unhelpful, and even perhaps misleading, to categorize children and youth as members of discrete vulnerable groups, a certain compartmentalization is almost inevitable. While stressing the grinding poverty that affects the majority of children and youths in Mozambique, a number of additional threats to survival and development characterize those with particular experiences as a result of the war. In seeking to isolate these threats, a distinction must be made between youth who were active participants in the armed conflict and those who remained civilians throughout the long years of conflict. Rightly or wrongly, this distinction was fundamental to the programmes of reintegration designed and implemented by the international community in Mozambique, at least between 1993 and 1996. The mainstay of international effort and resources was directed, intentionally, at the soldiers demobilized from the armies of FRELIMO and RENAMO.

Overall, reintegration assistance for demobilized soldiers, in particular that provided by the International Organization for Migration, Gesellschaft fhnische Zusammenarbeit and the International Labour Office (ILO), was adjudged to have been positive, although insufficient in comparison to the needs of the beneficiaries.

Deliberately excluded from the demobilization process in Mozambique were an unknown number of “child soldiers” under the age of 15. No one knows precisely how many children served in the armed forces of FRELIMO or RENAMO during the 16-year civil war in Mozambique, but the number is widely believed to be in the thousands. Vocational training is crucial to the successful reintegration of former child/young soldiers. Research conducted for the ILO in Liberia, Mozambique and Sierra Leone has emphasized the need not only for vocational training per se, but also the children's need for basic education and training in life skills to assist their reintegration. However, former child soldiers should not be treated as a distinct or separate group but should be integrated into skills courses with other trainees.

Girls and young women, both those who served in the armed forces and those who remained civilians throughout the war endured particularly harsh treatment. In addition, research conducted for the United Nations Study on the Impact of Armed Conflict on Children found that the experience in Mozambique suggested that the disintegration or disruption of community life caused by the war posed a threat even to the “informal” education received by girls, since they were often denied the skills traditionally taught to them as a consequence of the entire community having to concentrate on mere survival.

Another group of youth who may have special needs are the disabled. Thousands of young men and women were physically and mentally disabled as a direct result of the fighting (e.g. as a result of bullet wounds, shrapnel from bombs or artillery shells, or injuries from land mines or unexploded ordnance) or torture and abuse committed by warring parties, or as an indirect result of the lack of available health care caused by the destruction or theft of medical facilities and supplies, or they may be born with physical or mental disabilities, perhaps exacerbated by the social dislocation engendered by armed conflict.

The largest category of war-affected civilian youth were the refugees and internally displaced. The armed conflict in Mozambique dislocated and displaced an estimated 6 million Mozambicans - 4.3 million internally and 1.7 million as refugees across into neighbouring Malawi, South Africa, Swaziland, the United Republic of Tanzania, Zambia and Zimbabwe. In its assessment of its largest ever repatriation and reintegration programme, the Office of the United Nations High Commissioner for Refugees (UNHCR) affirmed that although some of the younger returnees, often prompted by their parents, returned to their former countries of asylum in order to look for work, there were no large-scale refugee back-flows.

The vast majority of returnees ... are peasant farmers. The key to successful reintegration is their ability to grow enough food. While returnees (like others in Mozambique) have a wide variety of survival strategies and coping mechanisms, they all start with having a successful small farm. If returnees can, within one or two seasons, be growing “enough” food, their reintegration will be successful. If they don't, no number of schools, health posts or water points will make much difference.1

Internal displacement continues to be an issue in post-conflict Mozambique. Displaced families remain in, especially, peri-urban areas unwilling to return home to the countryside as they fear that little or no infrastructure awaits them. An indirect consequence is the thousands of children and youngsters who drift along or into the streets of Maputo, Beira, Chimoio and Quelimane. The vast majority of the street children are boys. It is believed, however, that the number of girl prostitutes, many as young as 12 or 13, continues to increase. According to the United Nations Children's Fund (UNICEF):

... there has been a dramatic upsurge in the number of street children in recent years and the phenomenon is becoming a major social problem. In the past, street children were often those whose families had been split up by war. Bereft of support they were driven to life on the street in order to survive. Times, however, have changed and now the majority of children on the streets have families.2

Ultimately, of course, the responsibility for ensuring the development of the nation's youth will rest with the Mozambican Government. Thus, in October 1994, Minister of Culture, Youth and Sports, Mateus Katupha, stated that the future government of FRELIMO would seek to improve development programmes for youth, creating the conditions for genuine progress.3 However:

... [t]here is an awareness that the Government itself will not be able to meet the many needs of the population. Thus there is a need to encourage community initiatives which are usually low cost and of greater impact, as well as to build up local capacity to resolve their own problems through programmes based on the communities themselves, managed by them and that are self-sufficient and sustainable.4

Although, as one concerned agency has pointed out, reintegration is not an exact science, the Mozambique experience has produced a number of important lessons. Perhaps the single most important lesson from the Mozambique experience is the need to plan adequately on the basis of appropriate needs assessment. Such assessment should comprise socio-anthropological study of the intended beneficiaries and a labour market survey, including identification of actual or potential employers. In particular, in the preparation of the assessment the views of the target beneficiaries - individuals and communities - should be sought. In addition, the special needs of potentially vulnerable groups, including youth as a whole and women and the disabled in particular, should be carefully considered. The underlying objective of targeted programmes should be to include these groups in the mainstream activities wherever possible.

It may be inevitable, initially at least, that certain training and assistance programmes target demobilized soldiers specifically. But upon return to the communities, as far as possible, reintegration assistance should support the communities as a whole, using the resources of the family and the community, without singling out certain groups for special treatment or privileges.

As programmes of reintegration assistance and vocational training are not available in unlimited quantities, preference in the selection of beneficiaries should be given to those most likely to benefit from such programmes over the long term. This is particularly important in the case of training intended to lead to self-employment because of the intrinsic difficulty of successful and sustained self-employment in a post-conflict society. In particular, individuals that are clearly severely traumatized by their experiences during the war are unlikely to finish a training course. If refused a place on a training programme, however, referral for appropriate psychosocial assistance should be automatic, otherwise a feeling of exclusion or stigmatization may be reinforced.

It is necessary to develop special courses for war-affected populations that take into account their experiences. In addition, certain components should be included to reflect the special vulnerability and needs of children and youth. There is a need to develop basic modules that can be adapted to local circumstances. In particular, HIV/AIDS and mine awareness training, as well as literacy and numeracy courses and civic education, may save lives and promote successful reintegration of war-affected youth. In addition, trainers of war-affected populations should be taught to identify those who have been severely traumatized by their experiences (including themselves) and must know to whom referral can be made for psychosocial assistance. Trainers should not, however, be expected to serve as formal psychosocial counsellors themselves. In the case of training programmes for women, there should be a preference for the use of female trainers who may be more sensitive to the needs of war-affected women.

All training courses should aim to ensure that employment is already secured for the programme beneficiaries. Consideration should be given to the possibility of incentives to employers for employing disabled and other trainees potentially the subject of employment discrimination. Moreover, information packages for training beneficiaries should be in local languages as far as possible and their content clearly explained to those unable to read.

Monitoring and evaluation should not be considered an optional extra in any programmes, least of all training programmes with a long-term objective of facilitating access to sustained employment. In-house quantitative studies are not an accurate measure of the success of a programme. It is not therefore adequate merely to state that a certain number of people have been trained or have found employment since this measure fails to assess both whether the job is related to the training, and whether the employment is sustainable. A detailed study should be made of the situation comparing beneficiaries of formal vocational training with others who have not received any training so as to assess the “value added” by the training programmes.

The ILO, with its expertise in skills training leading to employment, has a great deal to contribute in formulating country-specific strategies towards employment creation and promotion as a country seeks to move from war to peace. In developing such strategies, there are three principles that should remain at the forefront of policy: planning, participation and partnership. Planning should be the basis of all interventions and yet in the rush to “do something” so often is rather neglected. It should incorporate strategies for monitoring and evaluation of programmes and allow for their necessary adaptation based on experiences gained. Participation draws attention to the need to involve the beneficiaries at all stages of the process. This helps to ensure successful project implementation and sustainability such that the project becomes a social process. Finally, partnership - with the government, other agencies, local and international NGOs and, especially, the local communities - is the basis of successful coordination of efforts. It widens the pool of knowledge and expertise which can be drawn on and avoids unnecessary duplication and overlap.