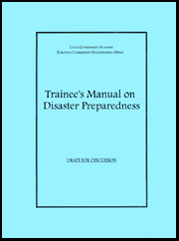 1. Types of Disasters in the Philippines
2. Statistics of Disaster Occurrences in the Country

1. Disaster Occurrences in the Area
2. Participants’ Sharing of Disaster Experiences

1. HAZARD is a phenomenon that pose threat(s) to people, structure or economic assets and which may cause a disaster. They could be either man-made or naturally occuring in our environment (natural).

5. DISASTER is a serious disruption of the functioning of a society, causing widespread human, material, or environmental losses which exceed the ability of the affected society to cope within its own resources.

6. DISASTER MANAGEMENT refers to the range of activities designed to maintain control over a disaster and emergency situation and to provide a framework for helping at risk persons to avoid or recover from the impact of the disaster.

7. DISASTER PREPAREDNESS includes measures taken to be able to deal with a threat when it occurs, e.g. warnings and evacuation. Such measures are usually aimed at minimizing loss of life, disruption of critical services and damage.

8. DISASTER PREVENTION refers to measures that are aimed at impending occurrence of a disaster and actually stop disasters from occuring, e.g. artificially producing rain to prevent drought.

12. DISASTER RESPONSE refers to measures which are taken immediately prior to and following a disaster. Such measures are directed towards saving life, protecting property, and dealing with the immediate damage caused by the disaster. Such measures include the activation of emergency operations center, mobilization of task services, emergency relief assistance, warning notification, and post-disaster assessment.

14. REHABILITATION refers to activities that are undertaken to help the victims return to “normal” life and be re-integrated into the regular community functions. It includes restoration of repairable public utilities, housing and resettlement inclusive of provision of new livelihood activities. It provides the link between the disaster-related activities and national development and at the same time ensures that the results of the disaster are effectively reflected in future policies in the interest of national progress.

19. VULNERABILITY is the relationship between the severity of hazard and the degree of damage caused. Each element - a building, a person, an activity - will be affected differently by hazards of different severity. The more severe the hazard is, the more damage will be inflicted on the element.

1. Phases of Disaster e.g. of activities
2. Inter-relationship of the Phases

A. Objectives of Disaster Management

B. Elements of Disaster Management

This consists of identifying threats (hazards likely to occur), determining their probability of occurrence, estimating potential impact of the threat in the communities at risk, determining measures that can reduce the risk, and taking action to reduce the threat. This includes hazard mapping, vulnerability mapping, estimation of potential losses (housing and physical structures, agricultural, economic and infrastructures), and development of appropriate disaster prevention and mitigation strategies.

Risk management is achieved by taking action in development projects that will lessen the risks to an acceptable level. For example, if flooding is determined to be a major risk, the risk can be reduced by physical measures such as dams, flood control embankments or channeling of the streams. Risks can likewise be reduced by moving threatened communities from flood plains and/or restricting economic activities in the flood zone to those that could absorb flood losses such as forestry and agriculture.

This addresses the human, structural and economic losses through both pre-and post-disaster actions designed to keep the losses to a minimum. Pre-disaster loss management activities focus on reducing the community’s vulnerability to hazards. Actions include improving the resistance of buildings and physical structures, providing improved safety for the occupants of building or settlements situated in hazardous areas, and increasing/diversifying the network of social support mechanisms available to communities in threatened areas.

Post-disaster loss management focuses on improving the response and broadening the range of support given to victims that includes facilitating relief delivery and stimulating a rapid recovery.

This is the most critical element of disaster management. Control is maintained through the following measures:

· anticipation of a disaster and the cause-effect relationship generated by each type of event;
· mitigation or reduction of the scope of disaster;
· disaster preparedness;
· accurate information collection and assessment;
· balanced response;
· timely actions;
· effective leadership; and
· discipline among people involved in the relief and disaster management system.

Disaster assistance should be provided in an equitable and fair manner. Fairness must underlie uniform relief and reconstruction policies in order to insure that disaster victims receive fair treatment and obtain adequate access to resources available.

In order to meet all competing needs and demands of a post-disaster environment, resource management becomes essential. The use of available resources should be maximized to the greatest advantage.

Disasters can have impact far beyond the immediate human, physical or economic losses. Disasters represent a loss of opportunity not only to individuals but also to the entire community. They can also be a serious setback to the country’s entire development program.

Disaster should be managed to reduce their impacts to the minimum and that recovery is accomplished quickly and their efforts contribute to the overall development needs of the country and its citizens.

The process of estimating the vulnerability to potential disaster-causing hazard of specified elements-at-risk. Vulnerability analysis is an essential prelude to disaster management. The analysis results to the identification of disaster-potential areas that may be difficult to recognize because of the unusual combination of, as an example, population density, literacy and poorly constructed structure. It also allows the always inadequate resources for disaster mitigation to be applied to areas of disaster potential on a rational basis.