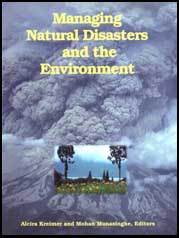 The United Nations declared the 1990s the International Decade for Natural Disaster Reduction. The Ad Hoc Group of Experts for the IDNDR saw the Decade as a moral imperative and urged the application of scientific and technical knowledge to alleviate human suffering and improve economic security. Therefore, the World Bank has assembled for this important Colloquium on Disasters and the Environment some of the brightest minds in the fields of development and environmental and disaster management.

Why is this happening in the Bank? What do natural disasters have to do with an institution that has rather limited involvement in financing relief measures and little technical capability for predicting disasters? The connection is development itself. Poverty in the developing countries limits their resilience in the face of disaster. We have only to remember TV images of the earthquake victims in Iran, flood victims in Bangladesh, and, more vivid still, the emaciated victims of recurrent drought in the Sahel. In all these disasters, many more people died than needed to - and they died because of their poverty. They died for lack of transport, for lack of hospitals, for lack of shelter, for lack of food - they died for lack of means, generally.

You could express it another way: poverty keeps the insurance premium from being paid. There is no risk reduction without development - in the sense of growth and the accumulation of wealth, the ability to save and invest, the creation of functioning institutions, and investments in human capital. Development enables ex-ante precautionary measures to be taken that are an important application and expression of wealth - and makes it possible to cushion the impact ex post, when preventive measures are inadequate.

But development is not enough. Development is a necessary but not a sufficient condition for safety. And one purpose of this colloquium is to focus on ways in which the quality of development must be improved - to examine the important feedback loop between growth and the resource base. We recall that the United States allowed drought conditions - the Oklahoma “dustbowl” of the 1930s - to develop even though the agricultural practices of the time were known to be disturbing the American Prairie’s delicate ecological balance. The small farmers lost their land to produce wealth for others.

Even humanitarianism is dangerous when it ignores long-term effects on the ecology. After the first drought in the Sahel, for example, many European agencies rushed to dig wells that would bring water. Cattle herds grew in number, the cattle devoured all available groundcover, and the water table dropped rapidly - because there was nothing to absorb even the little rain that did fall. The herders were worse off than they had been before. All the traditions that had seen nomadic families of the desert through in the past were of no use; the land had lost the ability to sustain animals because of the tube wells.

In short, development is needed to increase developing nations’ resilience in the face of disaster, but development efforts must not result in destruction of the natural resource base.

International efforts to combat global warming and to cooperate on the use of the seas are two components in a major change in resource use. We need to create a fund for poor countries so they can forgo the use of their resources in the short run - as called for in the Montreal Protocol and the Global Environmental Facility. Too often, costs fall on the poor in developing countries while benefits accrue to other, better-off countries.

We must also increase the capacity for scientific research. We can never reach the level of precision with data, or the security of prediction, that an insurance company is capable of - but we must improve our capabilities for measuring the risk of disaster. Better data on risk will allow us to develop policy and incentives to channel the use of our natural resource base in more benign ways. How we use these environmental assets has an impact on the entire world. We must understand the interconnectedness of development and the management of disasters and the environment.