2. Flags and signs painted on the hulls of ships

Flags and signs painted on the hulls or the sails of ships are probably the most ancient means of identification used by merchant vessels and warships. For several hundred years they were sufficient to allow fairly reliable identification of ships, even at reasonable distances and early enough to permit action to be taken if needed. The introduction of field-glasses and later binoculars somewhat improved the range of visibility.

These considerations were not, however, of great import when naval warfare was still limited to sailing warships, which used relatively modest gunnery with a limited shooting range, and when submarines were not yet a reality.

The tremendous development in the technical aspects of naval warfare during the last century and of air warfare since the First World War has changed the situation completely.

Modern warfare relies increasingly on the use of sophisticated technology which makes it possible to destroy a target long before it can actually be seen. Moreover, the mechanization of means of combat and the widespread use of electronic means of observation, and even to some extent of automatic firing, especially of sea and air weapons, have considerably increased the range and rapidity with which weapons can be fired and their velocity. As a result it has become almost impossible to recognize at a sufficiently early stage personnel, establishments and especially protected transports (by land, sea or air) bearing only the distinctive emblem.

To make sure that medical establishments and transports can be properly identified, the visibility of the distinctive emblem must be significantly improved.

The use of visual markings and other means of visual identification is not in itself sufficient to provide effective identification of protected naval or air transports, especially during naval, air and amphibious operations.

Additional means of signalling and identification, such as radio, radar, underwater acoustic devices and, to some extent, light signals, are therefore needed.

Light signals can be compared to flags and painted signs, but they offer additional advantages, i.e. they are visible at night at greater distances, and their visibility can also be improved in daylight, depending on weather conditions and especially when the signal is a flashing light.

This category also includes the use of the International Code of Signals, Morse signalling lamps and even semaphore signalling. Until recently these means were still used for communication in both the merchant navy and the naval armed forces. They have since been progressively, but not completely, replaced by radiocommunications or by electronic devices.

High-intensity lights, such as those used on aircraft (anticollision beacons, strobe lights, landing lights, etc.) or at airports to indicate the approach path (PAPIs - Precision Approach Path Indicators) and illuminate the landing strips (runway lights), could be used, in accordance with the Geneva Conventions and their Additional Protocol I,6 to illuminate the distinctive markings of hospital ships and other protected vessels, thereby somewhat extending their range of visibility and making it possible to identify them more rapidly.

For instance, the use of a flashing blue light is recommended in Annex I to Protocol I additional to the Geneva Conventions for the identification of hospital ships, medical aircraft and other protected transports (Art. 7, version amended in 1993). Many tests have been carried out to ascertain the maximum range of visibility obtainable with this type of identification. The results were rather disappointing: when used for the identification of medical aircraft, the light was visible only up to 1.5 km by day and approximately 8 km at night. Moreover, it tended to go from blue to white as the distance increased. 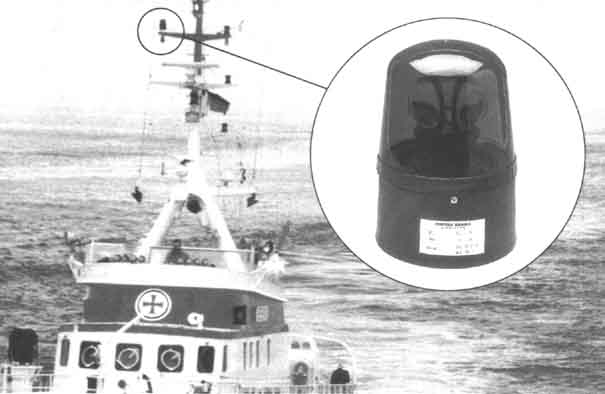 Model of a Flashing Blue Light Equipment for use on board sea-going vessels. (Photo by courtesy of PINTSCH-BAMAG, Hamburg, Germany)

More recent tests carried out at sea with a newly developed flashing blue light7 have proved more promising. Whereas the maximum range of visibility in daylight was again about 1.5 km, at night it extended beyond 9.5 km, with the light maintaining its blue colour. The results achieved were thus in conformity with the relevant provisions in this regard.8

Interesting though they may be, these technically somewhat crude means of communication and identification are totally inadequate when it comes to ensuring rapid and reliable identification of medical transports in modern armed conflicts. They are therefore useful only as a supplementary means of identification.

Moreover, the increasingly frequent use of day and night vision systems, based on the principle of thermal imaging (or passive infrared),9 raises a new problem with respect to the visibility of the emblem. If the emblem is painted with ordinary paint, it will not be visible when observed with a thermal-imaging camera. However, as these vision systems allow for a 1.5 to 1.8-fold increase in the range of visibility compared with that obtained by means of ordinary optical devices, they are used not only for night observation but also for surveillance and sighting by day.

9 Thermal imaging - passive infrared: by this means, the natural or artificial electromagnetic energy emitted in the far IR band (8-12 µm) by objects is transformed into electrical signals which are then used to draw a map of the hot points on the landscape, thus forming an image which can be observed through fieldglasses or on a screen or recorded using special apparatus.

The ICRC is aware of this problem. Seeking a solution that would be both simple and effective, it has recently tested the use of red adhesive therma tape to form the red crosses displayed on its vehicles. The initial results have been quite promising and, provided that certain simple precautions are taken when the tape is applied, there should be no reason not to make use of it. The provisions of the updated version of Protocol I10 authorize the use of special materials to make the emblem visible in the infrared band.