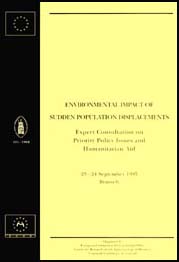 Case studies from Rwanda, Tanzania and Zaire were presented. The ecosystems in Rwanda and Tanzania have been affected and modified by human activities over centuries. Ecosystems accustomed to intense human activity (such as in the Rwandan and Tanzanian setting) appear to react better to the consequences of population/livestock concentrations, than ecosystems that have been less affected by human activity (e.g. Zaire). The carrying and recovery capacities of various ecosystems is also affected by the duration of population/livestock concentrations. Recovery of affected ecosystems in general, however, will depend on the intactness of humus and the presence of seeds and seedlings in the ground once the period of stress is over.

Intervening factors which determine the carrying and recovery capacity of an affected ecosystem include the fragility of the ecosystem; local topography; local availability of energy sources; availability of pastures; climatic conditions (heavy rainfall that may wash away topsoil); energy needs of refugees; number and type of livestock; number of refugees; length of stay; and rapidity in which an environmental operation is started.

The aim of an environmental operation initiated following population displacements, therefore, should be to safeguard the physical and socio-economic environment, and focus on the local community to ensure long term sustainability.

The main recommendations that can be drawn from the case-studies include:

· where humanitarian crises can be expected, maps indicating areas with fragile ecosystems should be prepared;

· environmental considerations should be included in the very beginning of a crises. It is recommendable to include an environmental expert in the initial assessment team;

· the local population should be involved in planning the use of land from the very beginning. Efforts should be made to ask people how they want to use the land.

There are major funding difficulties for sanitation related projects in the post-emergency phase, emanating from conflicting priorities and limited resources in implementing emergency related projects (how can you harmonise the need to save lives through adequate water and sanitation projects, and ensure that you do not cause long term damage to the environment.

Relief attracts people who may cause environmental degradation enhanced by lack of a co-ordinated inter-agency response during mass displacement crises.

Several suggestions could be put for the way forward, including:

Programme integration: in order to appreciate the overall impact of an emergency programme on the environment, planning, monitoring and evaluation of the various programme elements have to be brought together. Were there are many different agencies involved in the same programme, effective consideration of environmental impact demands strong co-ordination and a willingness on the part of the agencies to accept the role of co-ordinating bodies.

Information, preparedness and consultation: good information already exists in and about many places which are (potentially) subject to large population influxes, in the form of satellite images, aerial photographs, maps, ground surveys and Geographical Information Systems (GIS), etc.. As the data are held by a variety of bodies (government ministries, universities, local development projects, companies, NGOs and defence forces), it is often time consuming and difficult to access and assemble the relevant data when emergencies occur. Desk studies could be made on areas where population movements are likely to occur, so that a basic understanding is developed before the emergency occurs, and for short term decisions with better long term environmental consequences. This could be done by a co-ordinating body such as UNHCR or a consortium of agencies, which could then make the relevant information available to implementing bodies when needed.

More realistic planning horizons: it is generally true that temporary settlements of refugees and displaced people have lifetimes spanning years rather than months. Oxfam’s response in water supply and environmental sanitation tends to use equipment which may last for many years and to engage the communities involved in a way that produces sustainable management of the infrastructure installed.

Better site selection: the environmental impact of displaced people depends crucially on the location and size of the settlements. Dispersed settlements, whilst being more difficult to service in some cases, provide more healthy places for people to live in and have less negative impact on natural resources nearby.

As refugee flows and other forms of forced migration take place with unprecedented magnitude and speed, displaced people utilise the meagre resources available in their resettlement zones, and this frequently creates tensions between newcomers and local populations. This presentation aims at examining environmental and political problems related to the displacement of peoples with special emphasis on Bangladesh and Sudan.

The first aim was to examine environmental impact of sudden massive refugee influxes and long-term residency of displaced populations in receiving areas. Secondly the presentation discussed the political implications of refugee flows. Finally, the cases of Bangladesh and Sudan are examined to see whether the interrelations of population displacement, environmental change, and political insecurity specified in the first two theoretical sections are supported by real-world observation.

The concluding section suggested how affected States, international community, and relief agencies can minimise refugee-related environmental and political disruptions, particularly by coping well with emergency relief phase. There are three prerequisite for a timely, effective, and yet sustainable response to a refugee crisis cited were preparatory planning, immediate relief, and sustainable relief. These three phases should not be considered in isolation but within an integrated system.