The consequences of the natural disasters are varied. They may be considered in terms of human lives, material goods, economic activities, political impacts, social or psychological factors. They may also be direct or indirect, may have a more or less long duration, and may follow a relatively wide spatial scale. Figure 3 (1) gives the different typologies and shows the extent of the problems caused by natural disasters which could not be avoided or whose effects it was not possible to attenuate. The countries in South East Asia and Bangladesh are regularly subject to such problems. However, the extent of these problems is not easily measurable because of insufficient data in this domain. This report does not aim at filling the gap but gives only some of the essential factors in terms of human assessment and the consequences from an economic and social development point of view. 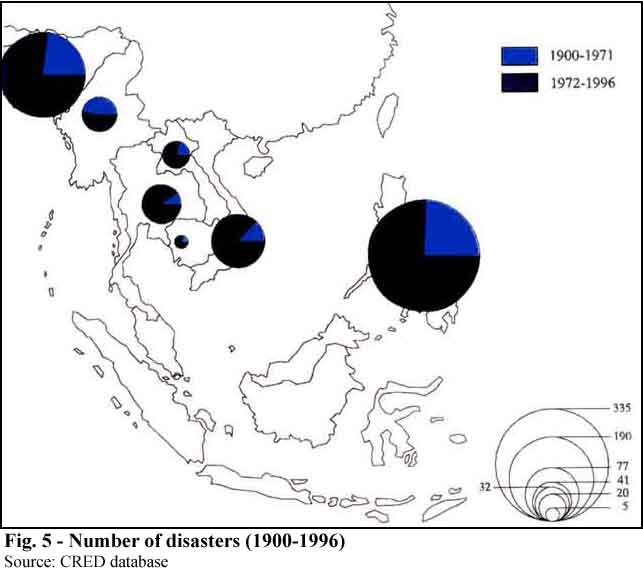 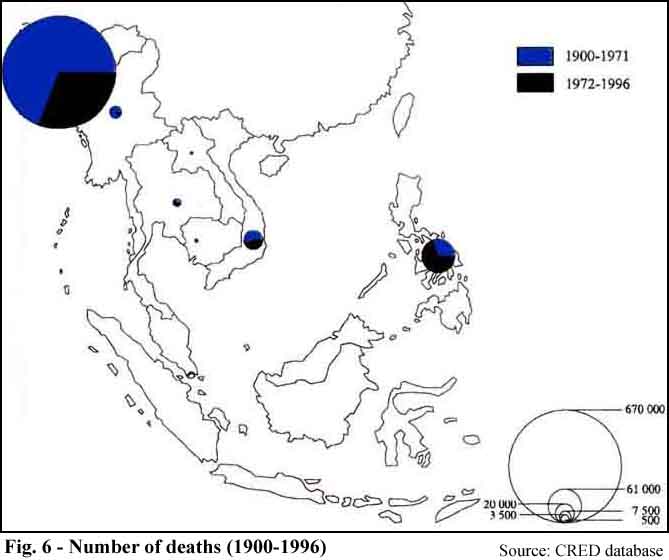 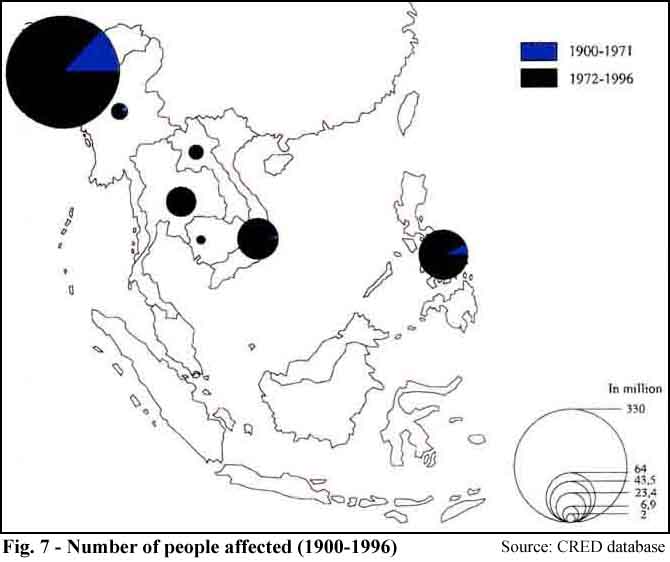 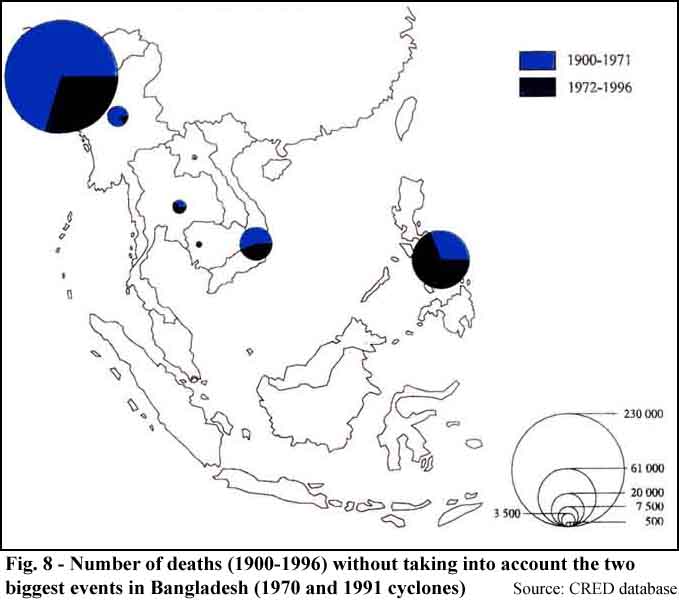 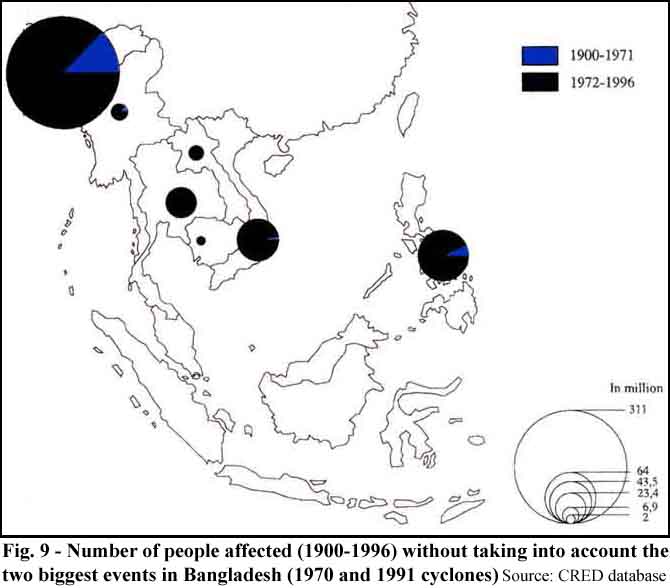 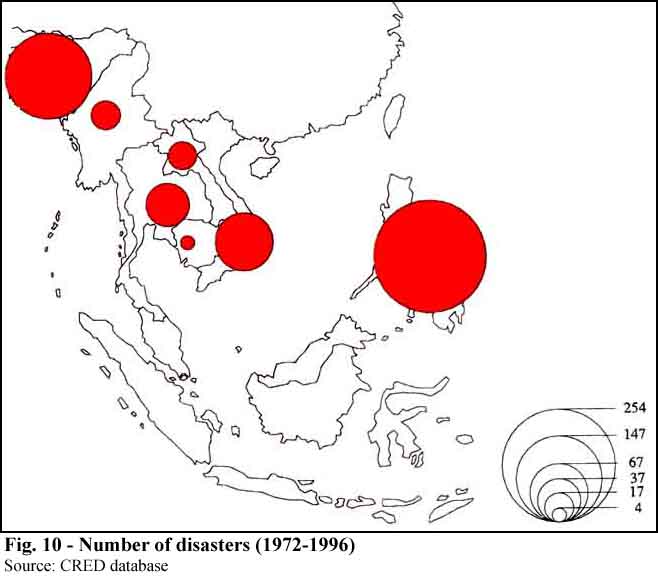 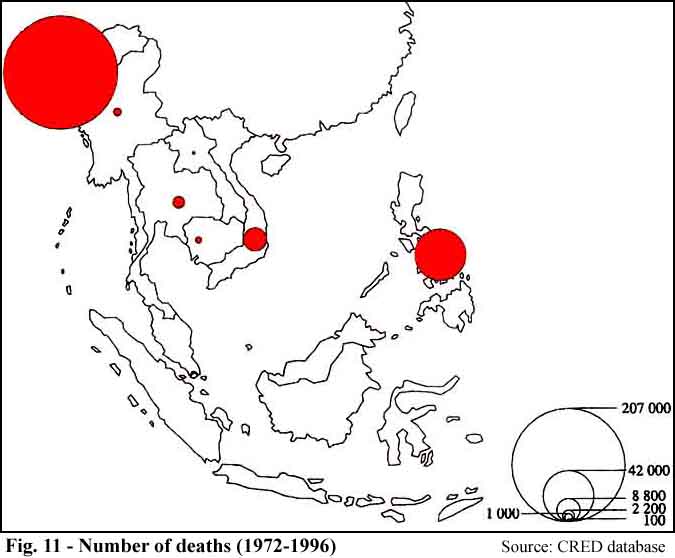 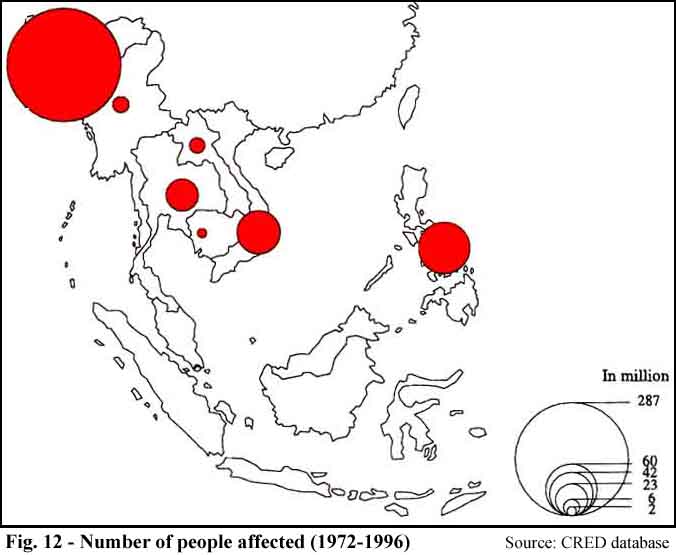 Even more than the human assessment, the economic assessment of natural disasters in the 7 countries is difficult to establish because the information available is scattered, incomplete and generally associated with particular events. In addition to this, the estimations may vary considerably from one source to another. This obviously explains why syntheses are so scarce and incomplete.

Figure 13 shows a selection of 42 events of the 297 that occurred between 1988 and 1996. These are the only events whose damages have been assessed. Most of these evaluations only correspond to the costs of direct consequences. They nevertheless give a clue on the drain that the national economies have been subject to.

Beyond the direct or indirect losses, the economic consequences are of major importance given the repercussions they have on the economic development of the countries (GDP, public finances, foreign trade, price indices, ...). In the same line of thought, an approximate calculation of the percentage of GDP concerned gives eloquent figures. Sometimes the cost of only one disaster attains or goes beyond 10% of the annual GDP as in the case of Bangladesh in 1988 and in 1991. The cumulated costs of the different disasters affecting a country within the same year can be quite high. In the Philippines for example, the 9 disasters that occurred in 1992 have costed 6.5 billion dollars which is about 13% of the GDP of the year. This amount may have been exceeded several times as well in the Philippines as in other countries, especially in Bangladesh.

The damages therefore have a strong effect on the economic development of the seven countries and in particular key sectors. Figure 13 shows the sectors for which data are often available -agriculture, transport network, and housing. The data, though incomplete and heterogeneous, give an idea of the significance of the damages which often recur during the same year.

Because of the important role it plays considering the creation of national wealth and the population needs, the agricultural sector appears as a highly vulnerable one. From the 1996 World Bank estimates, the agricultural sector would still stand for 10.9% of the GNP of Thailand in 1995. The percentage would be higher for the other countries of the sample area: 30.9% of the 1995 GNP would be due to agricultural activities in Bangladesh, 44.6 and 54.3% respectively in Cambodia and Laos.

The agricultural sector plays an essential economic role as far as the demographic pressure is concerned. The FAO on a mission in Laos in 1996 noted that 16,000 hectares were devastated by floods in the Central provinces which resulted in a deficit of 154,000 tonnes of rice for the 1996-1997 period and therefore making emergency aid necessary (8). The fundamental role played by agriculture and the water associated with it, helps to increase its cultural recognition. Over the centuries, an implicit relationship between water, rice and prosperity has been observed in Thailand (RIGG, 1955) (9). This same relationship has been observed elsewhere. This helps understand the criticism of some Bengalis to the Food Action Plan which they think would "dry up" Bangladesh - an economically and culturally unacceptable situation (BIMAL KANTI, p. 126).

9RIGG mentions the following thai sentence found on the Sukhothai temple dated 1292: "under the -reign of the King Ramkhamhaeng, the Sukhotai country is prosperous. In the waters there was fish and rice in the fields."

The economic consequences also concern the activities related to international trade, which have become indispensable because of national debt. Export agriculture, tourism, crafts and industrial activities are assumed to bring in foreign currency that is indispensable for the equilibrium of the balance of payments.

The agricultural products hold an even more significant place in exportations. From the World Bank estimates (1996a), coconut milk and sugar exports only would stand for 16% of the value of the Philippines exports in 1995.

Free zones can be affected by cyclones and floods, with greater probability as they are situated in the coastal plains and on the principal deltas. In Bangladesh, the Chittagong free zone was very seriously affected by the 1991 cyclone (NORMAND, 1991).

In Vietnam, the Can Gio sector near Ho-Chi-Minh-City is one of the growth poles created by the openings policy. This territory is quite often subject to floods, cyclones and storm surges.

In addition to orchards and shrimp breeding, farms for export, a port and industrial complexes have been planned by the Vietnamese government, hence the construction of a 11.5 kilometres-long coastal dike and the reinforcement of an existing device during a 3 to 5 year period at a cost of 2 million dollars (D.H.A., 1994).

As a result, the transport network is particularly vulnerable. Figure 13 shows that in June 1993, 5000 kilometres of the road network and 1100 bridges might have been damaged by floods in Bangladesh. In the following month, a probable 14,500 road kilometres were damaged although the World Bank (1996b) estimates show that Bangladesh had, in the period 1989-1994, a road network of about 14,000 kilometres. The extent of damage as a result of a single event could be found in the other countries, however lower than in the above case. In Thailand, 10,700 road kilometres damaged during a rain storm that accompanied a cyclone in 1991 would, from World Bank estimates, stand out for 15% of the total length of the road network. However one should not forget the importance of water transport in all these countries, which could minimize the extent of damages (VAN DE WALLE, 1996).

Finally the housing sector is one of the elements most hit by natural hazards. A privileged relationship between the precarious settlements and the different sectors of the countries having a higher frequency and/or intensity of events has been clearly established in the bibliography. This is the case in the shanty towns of Dhaka in Bangladesh (NAZRUL ISLAM, 1996), Ho Chi Minh-City (BOLAY et alii, 1997) and Hanoi in Vietnam (DRAKAKIS-SPITH & DIXON, 1997). These authors have underlined the existence of a relationship between the Doi Moi (10) political development in Vietnam and the exaggeration of social differences, a relationship which was confirmed by DONG TO TUAN (1996). After a disaster, the portion of the GDP that is allocated to the construction sector increases. However both the foreign trade deficits resulting from importation and those from public finance increase. This has enabled to show the lasting effects of a disaster and consequently a growing tendency to foreign dependence. The response to natural disasters therefore tends to increase the vulnerability of countries to natural hazards, by an accumulative effect. Moreover a study carried out by the WORLD BANK has shown the indebtedness of the seven countries to fall between 42.5 (Thailand) and 127% (Vietnam) of the 1995 GNP even though this indebtedness is not a result of natural disasters only.

10 Policy aimed at opening the country to foreign trade.