Global context and role of the United Nations system

As the post-Cold War world stumbles forward, the human and political costs of realignment of resurgent forces has wrought an increasingly heavy toll on weaker societies. Whole communities, if not countries, often striving for self-determination, are undergoing devastating turbulence and conflict, resulting in great human suffering, and often placing them beyond the margins of the increasingly integrated global economy.

Whilst the industrial nations may become increasingly inter-dependent, atrophy is growing alarmingly at the margins. The last two years have seen a discomforting net trend to societal collapse in a growing number of regions - as always the poorer ones - as communities' traditional coping mechanisms for economic and political stress have been overwhelmed. Mass displacement, or worse, the genocide of "ethnic cleansing", are not the cause of this, but the symptoms of a more profound malaise, reflecting the inability of national and international communities together adequately to manage and direct the accelerating pace of global political, social, and economic transformation. Consequently, the humanitarian workload is exploding: and looks unfortunately like getting worse.

The euphoria that followed the end of the Cold War has been quick to disappear. In its place has come increasingly evident fragmentation, The costs of violence as a political option have spiralled: Dushanbe, Kabul, Kinshasa, Mogadishu, Monrovia, Yerevan, Sarajevo, Sukhoumi, have become not the exceptions, but the pattern for a whole variety of thoroughly destructive new conflicts. Without forgetting the smouldering legacies of Beirut, Nicosia, or Jerusalem.

Are whole regions, and not just countries, falling outside the Pale of emerging global integration? Marginalisation understates the drama of what is in effect the annihilation of local cultures, whole societies, on a growing scale - frightening enough to warrant its consideration as a fundamental threat to global peace.

The United Nations is the one encompassing global institution which can and must be expected to address these issues. Within the UN System, the United Nations Volunteers programme has developed new capacity and resources, and new relationships with partners in the humanitarian field. This has been facilitated by inter-agency cooperation as a result of General Assembly resolution 46/182, as well as by the global presence of UNDP, which administers UNV.

In UNV the world has an organisation where women and men from every country serve to promote human rights, to advance women's and children's rights and well-being, to protect the environment, to build inter-communal trust and cooperation, to assist in resettlement and voluntary repatriation of refugees, to promote civic education and to administer or monitor democratisation, including elections, to provide emergency relief to victims of natural and human-made disasters, to investigate and report on local situations, to train local partners for self-reliance, And to do all of this on an unsalaried basis, in a spirit of dedicated service.

This is the United Nations Volunteer!

Set up by the UN General Assembly in 1970, UNV is administered by UN Development Programme (UNDP). It serves as an operational partner in developmental, humanitarian and peace operations at the request of any UN member state or UN system agency. UN Volunteer specialists comprise more than 100 nationalities. They have the relevant academic qualifications or a proven track record in community-based action. All have working experience - usually some ten years. Their average age is 39. They serve in 120 developing countries, three quarters of them in those designated as Least Developed.

In 1984, the UNDP Governing Council (84/19) approved the use of UNDP's Special Programme Resources for African regional drought relief assistance through the use of UNVs. Later, Governing Council decision 85/22 urged the greater use of UNVs for emergency relief, drawing attention to UNV's flexibility, speed, and cost-effectiveness. The Maseru Declaration of 1986 at UNV's Second Inter-Governmental Meeting, called for UNV's capability in assisting in emergency situations to be institutionalised, developing its roster with specially-suited candidates.

The Kathmandu Declaration of 1991 at UNV's Third Inter-Governmental Meeting noted the importance for UNV relief activities of working through the UN Agencies and other international organisations specialised in this field. It placed special emphasis on UNV's comparative advantage in rehabilitation and disaster preparedness, particularly at community level.

In 1990-1991, UNV was faced with an upsurge in urgent requests from UN agencies rapidly to provide UNV specialists for humanitarian relief work. During 1991, UNVs served in Angola, setting up peace corridors for food aid; in Liberia and the Horn of Africa; and in Afghanistan, where UNVs formed the main field component of UN system efforts for relief and rehabilitation. From the initial phase of the Gulf emergency, UNV specialists provided field support to the key UN agencies involved in Iraq and neighbouring countries.

As a result of this rapid expansion, and in an effort to place its response on a more solid footing, UNV established a Humanitarian Relief Unit (HRU) in its Geneva headquarters towards the end of 1991, for rapid recruitment of short-term experienced specialists in fields where needs are most acute in times of humanitarian crisis.

Encouraged also by UNDP Governing Council decisions 90/22 and 90/38 in regard to working with refugees, displacees, and returnees, UNV's humanitarian relief approach is part of UN system-wide efforts to strengthen emergency response. This is in line with General Assembly resolution 46/182 of 19 December 1991, which called for special rosters of stand-by personnel, and also called for UN agencies' governing bodies to examine reserve and other contingency funding arrangements for stand-by capacity.

Start-up emergency funds for UNV enable earlier fielding of the operational, logistical, and technical personnel needed by UN partner agencies to reach the affected populations efficiently and cost-effectively. UNV represents a small investment with a disproportionately large return in terms of satisfaction of basic human needs for millions of people on the margin.

A basic objective is immediately to respond to the front-line UN system agencies in their urgent requests for specialised personnel for speedy humanitarian deployment. The primary functions of UNV's Humanitarian Relief Unit are to recruit, deploy, and administer UNVs as individuals and in teams for assignments of variable duration according to need (e.g. 3-6 months, or more). Assignments in support of capacity-building for prevention, preparedness and mitigation of disaster may be longer. 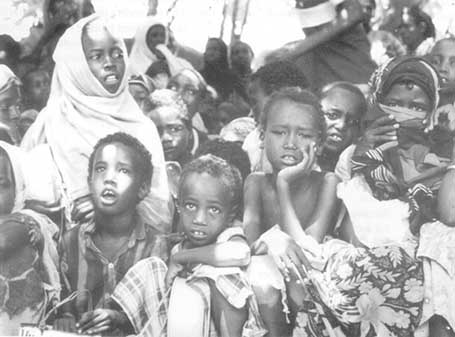 To provide its response capacity, UNV has established a facility for rapid recruitment and support, using a pool of pre-cleared candidates on stand-by. This includes the composition and orientation of emergency response teams for rapid deployment. UNV has comparative advantage in recruiting, training, deploying and administering volunteer-specialist humanitarian teams, UNV develops project concepts and documents, and engages in other programming activity, especially in relation to programmes to build capacity in disaster-prone countries for disaster prevention, preparedness, and mitigation.

Progress in implementation of the approach

The years 1992 to 1994 witnessed a rapid expansion in UNV's humanitarian relief volunteers. The efforts of the UNV's Humanitarian Relief Unit (HRU), established towards the end of 1991, are paying off the initially intensive process innovation, advocacy and advertising, inter-agency networking, and fund-raising. There is an increasing involvement in new activities in support of UN-coordinated programmes, especially for complex protracted emergencies. Working closely with the UN Department of Humanitarian Affairs (DHA), UNV has become recognised as a prime source for readily available experienced field relief workers and technical managers, who can accelerate the transition to UNDP-supported sustainable human development.

The use of experienced field relief workers and managers as UNV specialists, offering their services as unsalaried professionals, provides the UN system and the international community with an opportunity to deliver vital humanitarian services with dedication and selflessness, and to achieve greater impact with limited resources.

Additional countries for which UNVs are currently being recruited include Azerbaidjan, Tajikistan and Uzbekistan.

Donor country support has been crucial and in the past two years UNV has mobilised contributions or pledges totalling US $ 20 million from Austria, Belgium, Denmark, Ireland, Japan, the Netherlands, Norway, Sweden, Switzerland, the United Kingdom, and the USA. When added to other UN System funds, the currently approved humanitarian assistance portfolio in UNV exceeds US$30 million in funding. Even so, UNV still needs a further several million US dollars to meet pipeline needs for its own projects, and for UNV assignments with UN Agencies for which they have not themselves, or yet, obtained funding. 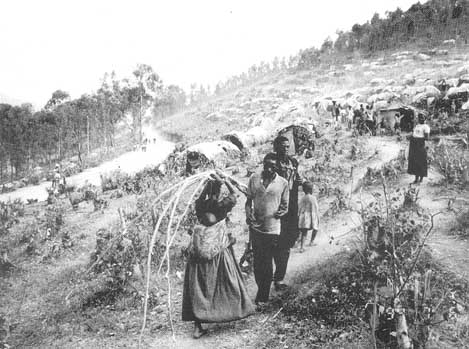 Refugees suffer, so does the environment... (Photo: Trocaire/Stephen Jackson)

Key features involved in the UNV approach in humanitarian work include the following:

• stand-by rostering for candidates pre-selected in certain disciplines and who confirm provisional short-term release agreement from their current employer;

• systematic and intensive pre-assignment briefing and post-arrival orientation, and where possible, intensive training in disaster management skills in advance of request for selected UNVs-designate, or as soon as possible thereafter, where needed;

• deployment where possible in teams, with a comprehensive package of services and supporting facilities;

Given UNDP's and UNV's emphasis on the need for rehabilitation/reconstruction activities as soon as feasible following a crisis situation, a key feature of the HRU is that it works closely with the UNV long term rehabilitation/development programmes to ensure a smooth transition between crisis and Sustainable Human Development.

UNV also has over two decades of experience in fielding specialists to environmental and conservation projects. In fact, there are many 'themes' within the UNV programme which facilitate and reinforce this transition between relief to development. For example, UN Volunteers are presently engaged in programmes of conflict resolution, confidence and capacity-building at community level, rehabilitation of infrastructure, repatriation and reintegration of refugees, human rights promotion, peace-keeping activities, implementation of disaster prevention and preparedness programmes etc. 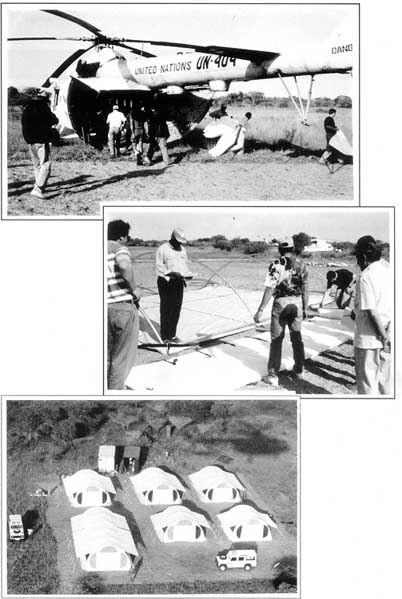