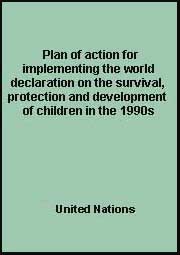 Alleviation of poverty and revitalization of economic growth

28. Achievement of child related goals in the areas of health, nutrition, education, etc., will contribute much to alleviating the worst manifestations of poverty. But much more will need to be done to ensure that a solid economic base is established to meet and sustain the goals for long- term child survival, protection and development.

29. As affirmed by the international community at the eighteenth special session of the United Nations General Assembly (April 1990), a most important challenge for the 1990s is the need for revitalization of economic growth and social development in the developing countries and to address together the problems of abject poverty and hunger that continue to afflict far too many people in the world. As the most vulnerable segment of human society, children have a particular stake in sustained economic growth and alleviation of poverty, without which their well-being cannot be secured.

30. To foster a favourable international economic environment, it is essential to continue to give urgent attention to an early, broad and durable solution to the external debt problems facing developing debtor countries; to mobilize external and domestic resources to meet the increasing needs for development finance of developing countries; to take steps to ensure that the problem of the net transfer of resources from developing to developed countries does not continue in the 1990s and that its impact is effectively addressed; to create a more open and equitable trading system to facilitate the diversification and modernization of the economies of developing countries, particularly those that are commodity-dependent; and to make available substantial concessional resources, particularly for the least developed countries.

31. In all of these efforts the fulfilment of the basic needs of children must receive a high priority. Every possible opportunity should be explored to ensure that programmes benefiting children, women and other vulnerable groups are protected in times of structural adjustments and other economic restructuring. For example, as countries reduce military expenditures, part of the resources released should be channelled to programmes for social and economic development, including those benefiting children. Debt- relief schemes could be formulated in ways that the budget reallocations and renewed economic growth made possible through such schemes would benefit programmes for children. Debt relief for children, including debt swaps for investment in social development programmes, should be considered by debtors and creditors. The international community, including private-sector creditors, are urged to work with developing countries and relevant agencies to support debt relief for children. To match increased efforts by developing countries themselves, the donor countries and international institutions should consider targetting more development assistance to primary health care, basic education, low-cost water and sanitation programmes and other interventions specifically endorsed in the Summit Declaration and this Plan of Action.

32. The international community has recognized the need to stop and reverse the increasing marginalization of the least developed countries, including most countries of sub-Saharan Africa and many land-locked and island countries that face special development problems. These countries will require additional long-term international support to complement their own national efforts to meet the pressing needs of children over the 1990s.