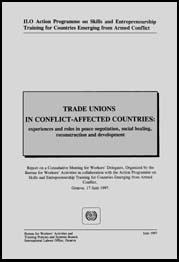 At the Chairperson’s request, the Chief of the ILO’s Training Policies and Systems Branch, Ms. Maria Ducci, provided a summary of the discussions and also pointed out that the Meeting had clearly shown the extreme importance of assisting conflict-affected countries and the need for the ILO’s major role in this area. A large “battery” of interventions had to be deployed by the Organization. There were variations between the conflicts in the different countries but their impacts were similar in essence. The ILO needed to learn from the various experiences, as was being done in the Action Programme, to acquire the knowledge base necessary for the Organization to be able to help its conflict-affected member States. The Action Programme had provided a valuable chance to take stock of the situation. Since its duration was very limited (it was ending in December 1997), effective ILO response to their requests could only be undertaken if there was a follow-up phase of the Programme to enable the Organization to confront the identified challenges. Thus, the participants should also raise the concerns brought out at the Meeting as an urgent issue in the appropriate quarters, such as the Governing Body, for a political decision to be taken on the matter. She observed that their requests demonstrated that a massive programme of ILO technical assistance was required as a follow-up to the Action Programme. Funds would have to be mobilized for its implementation to assist the social partners in the conflict-affected countries.

Finally, the Chairperson, Mr. Ali Ibrahim, indicated that the Bureau for Workers’ Activities would try to carry out follow-up technical cooperation activities to assist the trade unions in the conflict-affected countries during the 1998-99 biennium. The report of the Meeting would be widely circulated to stimulate follow-up action.