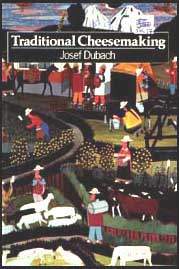 Chapter 1: Other foods from milk

The whey removed from the cheese vat after the initial stirring of the curd and before the addition of hot water and salt is rich in fat and albumin, a milk protein which is not coagulated by rennet.

The appropriate composition of whey is:

The mineral salts and lactose, the major solid component creating the sweet flavour of the whey, are dissolved in the whey and can only be recovered by the concentration of the whey by evaporation to 60 per cent solids followed by cooling. The fat can be removed either with a mechanical decreamer, or by leaving the whey overnight until the cream rises to the surface. This cream makes a butter which is considered to have an inferior taste but which is excellent for baking. The albumin can be separated from acidified whey and used with or without fat to make Ricotta. After the fat and protein have been removed, the whey' which is rich in lactose and mineral salts, is usually fed to farm animals (Figure 16).

Figure 16. Transformation of whey and its by-products

Fresh Ricotta has a bland flavour and is made from albumin, obtained by heating whole or separated acidified whey, to which milk may have been added.

Incubate a few bottles of whey from the cheese vat at 38 C for 24 hours until it reaches an acid level of 200 Dornic. A small quantity of yoghurt starter culture may be added to stimulate acidification.

Heat the whey to 80 to 85 C. It should not be acidified until it reaches the indicated temperature. Add about 10 per cent of the whey starter, or 250 g of granular citric acid dissolved in two litres of water for 500 litres of whey, or 0.4 per cent white vinegar. Stop the agitation after the addition. Continued heating carries the submerged curd particles to the surface, but the fire should be kept very low. Let the curd rest for 15 minutes. Floating is influenced by the amount of fat and acid. Adding some skimmed milk or buttermilk, when the whey reaches 85 C helps to trap fine particles of albumin more effectively by collecting them into larger units. Buttermilk gives the product a smoother and softer texture. If too much agitation is applied or there is excess acid, the curd mass will settle to the bottom of the vat and the separation from the whey will be very difficult.

Transfer the floating curd from the surface into a fine cheesecloth with a perforated scoop. If the precipitated albumin fails to rise to the surface, the whey may be strained through fine cheesecloth into another tank. Tie the four corners of the cheesecloth together and suspend it above the draining tank for four to six hours to drain.

It is difficult to believe that acid cheese, which has been sterilized at more than 80 C is so susceptible to microbial spoilage. Ricotta cannot be preserved for very long because of its high moisture content, and should be eaten fresh, either on its own, or with salt, spices, sugar cinnamon or with sweet fritters.

One hundred litres of whole whey contains approximately 700 grams of albumin and 800 grams of fat a total of 1.5 kg of removable solids. This yields 3 kg of Ricotta, since Ricotta contains more than 50 per cent of water. Given this low yield, the cheapest form of fuel available should be used.

Cream, the concentrated fat from milk, is derived directly either from milk or from the whey.

The cream from milk differs in composition from the cream obtained from whey, and the composition can be measured with a butyrometer or simply by eye.

The composition of cream.

Separating, or skimming the milk or whey, is the first step in buttermaking and can be done in two ways: naturally or mechanically.

The milk is left to stand undisturbed overnight so that the cream rises to the surface and can be skimmed off with a spatula or flat spoon, agitating the milk as little as possible. This traditional way of removing cream, used by cheesemakers who have no machinery, has the disadvantage of leaving a relatively large amount (more than one per cent) of cream in the milk.

Milk passes through a high velocity centrifuge (Figure 17). This separates the milk from the cream and they each flow out of separate outlets. Mechanical separation is more expensive, but is more rapid alla efficient than natural decreaming. The cream is almost completely separated from the milk, which contains only 0.05 to 0.10 per cent fat. Large decreaming machines have a dial which controls the percentage of cream to be removed.

Fresh cream contains large numbers of bacteria which will damage butter and therefore should be pasteurized to eliminate all bacteria, both harmful and beneficial. As cream is more viscous than milk, it requires a slightly more severe pasteurization: it should be heated to 75 C for 10 to 20 minutes.

Whey cream butter, having passed through the long cheesemaking process, has a shorter shelf-life than milk cream butter. Special attention should, therefore, be paid to maintain the correct pasteurization temperatures.

For cultured butter cool the cream to 25 C after pasteurization, a favourable temperature for the development of the bacteria in lactic starters. Add five per cent lactic culture, with flavour-producing bacteria, and leave the cream for 10 to 16 hours until it develops an acid taste. If left for too long, the cream will become so acidified that whey will begin to appear at the bottom of the tank; this is not desirable. As a general rule, the cream should not exceed 45 to 55 Dornic. Cool the cream to 12 C.

Churning throwing the cream against a surface transforms it into butter. The cream thickens and becomes spongy as the fat globules mass together, becoming solid grain-size pieces of butter which float to the surface of the cream whey, the whitish liquid called buttermilk. As soon as the cream thickens and before the grains of butter form a mass, the churning should stop. Either the whey should be drained off or the butter strained out with a sieve. If the grains of butter are allowed to stick together they will re-absorb droplets of whey, increasing the amount of lactose present and giving the butter a short shelf-life. Churning normally takes 20 to 40 minutes and a churning temperature of 12 to 14 C should be observed.

Washing the butter grains prolongs its shelf life by removing any residue whey. Excessive washing, however, can destroy its taste and aroma. The water spring-or rain-water is suitable must be clean and free from harmful bacteria, or the effects of pasteurization will be annulled. The water should also be cool between 10 and 12 C in fact, the cooler the better.

Washing three times is usually sufficient to remove the buttermilk residue: when the rinse water running off the butter is clear rather than cloudy, the butter is ready.

Salt is added to butter to improve its flavour and help to preserve it, as salt delays the growth of microbes. There are two methods for salting butter:

· Dry salting Here, two to three per cent of fine clean salt is added to the butter after washing and carefully mixed in to ensure uniformity.

· Wet salting This method is used when fine salt is not available.

Between two and three per cent of clean coarse salt is added to the final washing water. It must be well-dissolved and if not completely clean or dissolved the solution should be filtered several times before use. The butter should not be allowed to mass together before the salt solution is added or the butter will not be evenly salted.

Pressing the butter, either manually or mechanically, removes any droplets of water that remain from washing in order to further its shelf life.

Butter churns usually have a pair of rollers which press the butter after washing is complete.

Butter is moulded into small blocks of one quarter or half a kilo with wooden forms and tops. These forms must be moist and cool so that the butter does not stick. After moulding the forms are often lined with wax paper that adheres to the butter when they are removed. The butter is packed in opaque cartons to ensure that light, which rapidly turns butter rancid, does not penetrate.

Good butter should have an adequate fat and a low moisture content less than 16 per cent. It should not contain much protein nor lactose as these components would feed unwanted bacteria. Unsalted butter must be especially well-treated in order to keep an agreeable taste and aroma.

Butter is composed of:

Conversion tables for cream and butter.

1. If milk is skimmed, 0.1% fat is lost.
2. Buttermilk (0.5 to 1 per cent fat) mixed with cheese whey and passed through a decreamer can yield more cream.