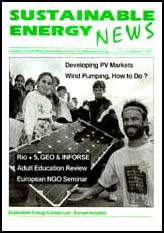 · Sunday, June 21: ECO-Forum Meeting, open meeting of the environmental NGOs to set a final strategy for the Ministers' Meeting, future of the ECO-Forum, meetings of the issue groups.

This year, the Annual Meeting of INFORSE-Europe will take place on June 26 in hus, Denmark. This will be the major event of the network, where all members are invited to discuss the future activities of the network and participate in the starting up of new activities.

Major points will be:

· The worldwide INFORSE Action Plan and CSD9 (INFORSE has been invited to take part in the UN discussion leading to the meeting of the Commission of Sustainable Development (CSD) in 2001.)

· Electronic Renewable Energy Education (a proposal to develop a high-level education program on renewable energy, to be distributed via e-mail and WWW).

· New strategy of INFORSE. (Update of the 7-year-old strategy on which INFORSE is based)
All lNFORSE members in Europe will be invited to the meeting directly.

Parallel to the official 'hus’98' event, INFORSE-Europe, along with the ECO-Forum's energy and climate group, will hold a workshop on NGO participation in energy conservation, including discussion of successes in sustainable energy NGO projects. The workshop will consist of:

· Presentation of successes in sustainable energy in Central and Eastern Europe.

· Presentation of new INFORSE-Europe publication on the successes. Discussion of future NGO work on sustainable energy success/case database and documentation.

· Presentation and debate on the official energy conservation initiative and on future activities at national and international levels.

· Discussion of NGO involvement in the future activities.

· Future activities of the energy and climate issue group.

The NGO events will be at ‘Brobjergskolen:’ an adult education center, (left) just on the other side of the street where the official events will take place at the Conference Center (right) in hus.

Anyone can organise a SunDay event. Everyone benefits.

SunDay is one day each year for Europe to discover the potential of renewable energy and to celebrate the power of the sun. All events are organised locally, coordinated nationally via National Liaison Officers, and publicized across Europe.