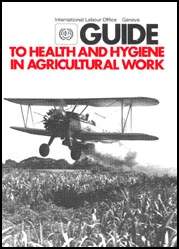 Trainees can be divided into two groups: health officials and agricultural officials.

Nursing, social and health personnel. Both in countries where there are enough medical personnel and, with more reason, in those where there are not (and where, accordingly, responsibilities are greater, training briefer and general education poorer), these officials should be aware of the new techniques in agriculture and of their dangers.

Pharmaceutical chemists. In some countries, pharmaceutical chemists can play an important role in health education, prevention and first aid. While some subjects that are useful in country districts, such as cryptogamy and toxicology, are normally taught, it would be desirable to give better instruction on occupational health in agriculture, especially to newcomers to agricultural life.

Veterinary surgeons. The veterinary surgeon has, by his training, a good knowledge of the diseases affecting animals, especially infectious and parasitic diseases. He should in addition be well grounded in agricultural medicine because of his contacts with farm workers and his important functions in the field of epidemiology (since prevention should be for both man and animal) and toxicology (where human and animal problems are the same). Thus he is well qualified to take part in preventive and educational activities.

Health administrators. In some countries, it is becoming increasingly common for health administration to be entrusted to non-medical personnel. The lack of general medical qualifications of these people is an added reason why they should be trained in agricultural medicine, especially when they are working in a rural area. Such training facilitates their understanding of the problems they are likely to encounter.

Heads of undertakings. Both on small family farms and in large specialised undertakings, those responsible for management should spend some time learning about agricultural medicine in the course of their training.

In both elementary agricultural schools and highly specialised institutes, courses in agricultural medicine that will be relevant to the educational level of the students must be organised. During his training, the agricultural student acquires the habit of keeping in touch with doctors, so that the medical problems that he will subsequently meet with in practice may be solved more easily.

Agricultural administrators. Agricultural technicians, engineers working on the development of rural zones or on agricultural buildings and agricultural labour inspectors should all, within the ambit of their responsibilities, be familiar with the problems of occupational health in agriculture. Because of the decisions they take and the advice they give, they have an extremely important part to play in education and prevention.