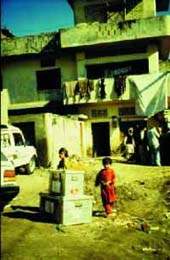 Pakistan: A high-risk store is situated right in the middle of Lahore’s Old Town.

Since 1980 huge quantities of pesticides have been accumulating in Pakistan. By now, that Southern Asian country has amassed one of the world’s largest stockpiles of obsolete pesticides. The process of accumulation began when the government halted its prior policy: suddenly, except in Baluchistan, no more free aerial spraying of pesticides was to be provided, i.e., the private sector was, as of immediately, on its own with regard to the distribution of pesticides.

Due to that change in policy, the pesticides in stock in the government-operated stores were no longer given to the farmers free of charge, but instead “stayed put”. With increasing age, they became as unsuitable for sale as for further use. No transition period was provided, during which the existing stocks could have been used up.

According to an inventory based on lists drawn up in 1987, there are an estimated 5,000 tons of pesticides, all told, at the country’s 700 storage sites. These stocks represent a broad range of formulations, mainly insecticides belonging to the organochlorine and organophosphorus group of compounds, in addition to dithiocarbamates. Due to some of the substances’ high acute toxicity and lack of suitable storage conditions, people and the environment in the vicinity of these storage sites are at jeopardy. Consequently, several attempts have been made during the past decade to alleviate the problem.

Following a limited survey, USAID and the government of Pakistan took initial disposal action in 1987. The idea was to incinerate the pesticides at a cement factory in the Punjab. Several pretrial runs were conducted, but disagreements about safety and the environment led to the project’s eventual failure.

In 1993 the government of the Punjab started another attempt to dispose of the obsolete pesticides, this time by simply burying them in the desert somewhere in the southern part of the country. However, public protest forced the government to discontinue the scheme. The pesticides were returned to the more than 100 storage sites whence they came, and where the entire bulk now remains.

Then, in 1996, a new actor appeared on the scene in the form of the Dutch embassy in Islamabad. Having heard about the dilemma, the Dutch launched an initial survey, charging the GTZ Pesticide Disposal Project with its implementation.

In November 1997 a team of experts investigated 15 storage sites in the provinces of Punjab, Sind and Baluchistan. They counted the stored quantities and took samples for analysis at the GTZ laboratory in Germany. They documented the condition of the stores and packages as a basis for risk assessment and, hence, drafted a strategy for disposal of the pesticides.

The worst and most dangerous of all the storage sites is the one situated right in the middle of Lahore’s very densely populated Old Town. Children in particular are constantly exposed to poisonous vapors and dust from the pesticides. Some of the inspected stores contain large amounts of various agents, including some highly toxic ones, all devoid of safeguards and freely accessible. 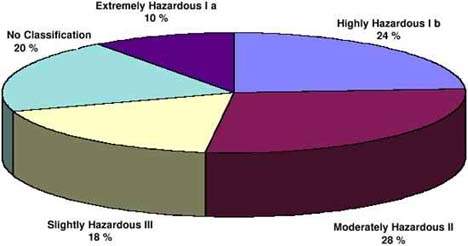 Pakistan: Classification of pesticide stocks according to an inventory.

The completed inventory of those 15 stores showed a total of at least 477 tons of obsolete pesticides, only 112 tons of which were still traceable (to 23 different manufacturers). Nearly a third had been produced or formulated in Pakistan. Thus, 16% of the overall quantity correlates to 21 international producers.

A total of 150 samples were taken, representing 336 tons of pesticides. Subsequent analysis revealed the presence of several hundred different formulations in the stores, with more than 45 different active ingredients. Most of the substances are insecticides. In addition to some marginally hazardous products, there are also some highly toxic ones, including a group of pesticides that have since been banned. Many of them are persistent organic compounds, and some of them can be found on the PIC list.

To be sure, as bad as these results of stocktaking appear to be, they can only convey a weak impression of the problem’s full dimension. Note, for example, that the Punjab alone has more than 100 chemical storage sites in addition to the 15 that were surveyed. But then, it is not just the sheer volume that is frightening. The general condition of the storage sites, in combination with an apparently somewhat carefree manner of dealing with such extremely toxic agents, has created a highly risky situation. It is therefore urgently necessary to take immediate measures for reducing the human health hazard.

It would not suffice to merely clear out these stores. Since the other ones may well be in similarly bad condition, the breadth of activity will have to be expanded. Of course, capacity bottlenecks could occur quickly, considering the quantities involved.

How, then, to approach the problem? Naturally, the waste material from the inspected stores in the Punjab could be taken out of the country for disposal according to OECD standards. That, however, would probably be so expensive as to exceed the available financial limits. In addition, this approach would void the chance to help build up the country’s own capacities.

Thus, the best thing to do in any case, even if the most hazardous stores were to be neutralized by exporting their contents, would be to clear out the other ones with the aid of local labor. This would give the Pakistani plant protectors a chance to learn how to handle such waste and, above all, to set up and operate pesticide storage facilities in a future-oriented manner.

Proceeding on this basis, one could even give concrete consideration to the possibility of expanding the surveys and collecting information about possible locations and facilities in Pakistan where disposal could be effected. This would involve genuine development-policy elements: along with the local disposal infrastructure, awareness of the problem would also grow - as would a lot of know-how that would help the local authorities make progress in their work.