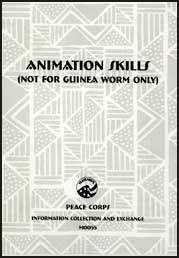 Guinea worm is one of the oldest identified parasitic diseases that afflicts human beings. It is identified by the long, string-like worm that emerges through a blister on the human body. Infected individuals are often disabled for up to three months by the painful ulcers produced by the worm's emergence and the complications resulting from secondary infections. While so afflicted, individuals are unable to engage in everyday activities, which leads to decreased agricultural and economic productivity for these individuals, their families, and communities. Children are especially vulnerable to the impacts of the disease as they can be kept from school when they or their parents are infected.

The Guinea worm life cycle begins when a larvae, recently released into a water source by a mature female worm, is eaten by a tiny free-swimming invertebrate called a cyclops, or water flea. Humans are infected by drinking water containing the infected cyclops. The larvae are released in the intestine and migrate into the connective tissue, having survived the stomach's gastric juices protected by the cyclops. body. Male and female worms mature and mate about three months after ingestion. The male worm dies after about six months and the female remains in the connective tissue to grow to about 70 cm (about 28 inches). This entire process occurs without signs or symptoms in the infected person.

Approximately one year after the initial infection, the worm has migrated to beneath the skin and is ready to emerge and release its larvae. The worm emits a toxic substance at its end that produces a painful blister from which the worm will eventually emerge. In more than 90 percent of the cases, the worm emerges from the legs or feet, although it can emerge from anywhere. People infected with guinea worm frequently try to relieve the intense burning and itching sensation of the blister by immersing the affected part in water. Contact with water causes the worm to eject its larvae, rupturing the blister. This process is repeated over several days to several weeks as the worm emerges slowly from the human host. Often the water into which the blister is immersed is also the drinking water source for the community. Thus the water source is recontaminated and the guinea worm life cycle is perpetuated.

An individual can have several guinea worms emerging from her or his body simultaneously. The blisters turn into ulcers that become swollen and very painful. Secondary infections often begin in the ulcer, sometimes moving into deep tissue or causing fatal tetanus. Infected ankle or knee joints can lead to permanent crippling. The person afflicted with guinea worm, even in cases uncomplicated by secondary infections, usually finds it very difficult to walk or move about and must abandon her or his usual work routine during the weeks of infection. The social, economic, physical, and psychological effects of this disease are devastating for the individual, family, and community. Yet, because human beings are the only host of the adult organism, it is the one parasitic tropical disease that can be successfully eradicated through improved hygiene.

Since there is no curative treatment for or immunity to guinea worm disease, prevention is the only real solution to the problem. The best and most sustainable solution to guinea worm disease is a permanent clean source of drinking water. Unfortunately, the construction of the necessary infrastructure-bore-hole, protected spring, hand-dug well-is often too great an undertaking for a community-given the inherent financial, technical, and political constraints. The ultimate advantage of a permanent clean water source is that it offers protection from many other waterborne diseases in addition to guinea worm.

Outside of the relatively costly investment in infrastructure, a number of preventative measures can contribute to guinea worm eradication. These include:

· Health education for populations in endemic regions is absolutely critical in bringing about the adoption of behavioral change necessary to break the disease cycle. By mobilizing communities, training health agents to promote preventive behaviors, and developing appropriate health education messages for affected populations, progress towards total eradication can be made. Health education should be an essential step in any preventive strategy.

· Filtering newly collected water through a clean cloth or monofilament nylon filter to remove infected cyclops. from questionable water before drinking is essential. The mesh size of the cloth must be small enough to prevent the passage of cyclops. Filters may eventually develop holes and tears and must be replaced. Comprehensive health education and repeated demonstration of the proper use of filtering cloth are necessary.

· Preventing infected people from entering water sources will prevent recontamination of the water. The community must participate actively to ensure that this strategy is successful. Uninfected family or neighbors must collect water for the infected person; the community can post guards on the water source; the source can be fenced in and posted with signs reminding the population of the importance of protecting their water.

· Chemical treatments can kill cyclops. in the water. A chemical called abate is safe to use if correctly applied by a trained individual. The disadvantage of this method is that repeat applications of the chemical are needed every six weeks. Providing for this application is difficult in many rural endemic areas.

Comprehensive guinea worm control programs use a combination of the above measures. Effective prevention strategies depend on a clear understanding by everyone in a community of how guinea worm is transmitted and how the cycle can be broken through preventive behaviors. An effective control program therefore must include adequate health education to promote the required behavioral changes.

There are many traditional beliefs and myths about guinea worm disease. They vary from community to community, but some of the more common beliefs include:

· Guinea worm is a loose vein or tendon.

· Guinea worm is the result of a curse placed on the village because of some wrongdoing.

· Guinea worm is caused by an angry local god.

· Guinea worm is caused by witchcraft.

· Emerging guinea worms should not be covered because it angers the worm and makes it look for another place to come out.

· Guinea worm is always in the body and comes out when the blood is bad or weak.