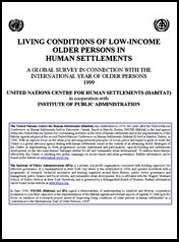 The Habitat Agenda and many other reports and publications by the UN Centre for Human Settlements (UNCHS) and other United Nations agencies suggest policies for governments regarding the shelter needs and rights of the growing proportion and numbers of ageing population. This report focuses attention on the rapid increase of elderly population taking place in the urban areas of developing countries and the difficulties they are experiencing in continuing to lead fruitful lives. It recognizes that due to their limited resources, few of these countries are able to mount substantial social welfare programmes assisting the ageing. However, it points out that there are other steps that national and local governments can take to improve the lives of the elderly.

To ascertain the specific problems and needs of older people case studies were undertaken including interviews with over 200 poor older persons in eleven major world cities under the direction of professional managers of ageing assistance programmes. The survey managers were then assembled at a Workshop in the Netherlands sponsored by UNCHS and the Netherlands Platform Elderly and Europe. The participants in the Workshop proposed specific measures and actions to national governments and local authorities designed to extend the useful lives of older people by guiding and training those who are healthy and not disabled to continue their useful employment and to share responsibility for maintaining and improving their shelter and community environments.

Thus, in recognition of the United Nations International Year of Older Persons-1999, the Survey and Workshop was undertaken in order to:

· Increase awareness of the growing proportion and numbers of older persons in urban areas;
· Identify and describe the various aspects of living conditions experienced by older persons;
· Suggest appropriate national policies and programmes for improving older people’s living conditions;
· Assist local officials by suggesting guidelines and successful practices that address and implement community activities to enable older persons to participate in improvements to their shelter and community environments.

The following sections elaborate on the conclusions of this research initiative, and recommendations to national and local governments as well as on the information regarding living conditions of low-income older persons in human settlements (summary of findings of the survey and general information on demographic trends in ageing and urbanization) and the country case studies. There are four annexes: acknowledgements, the survey questionnaire, best practices where three cases are presented, and the opening statement of Ms. Mieke Andela-Baur, President of Netherlands Platform Older People and Europe, of the workshop hosted in Amersfoort, Netherlands, from 9-11 September 1999 where the findings of this research initiative were discussed and finalized.