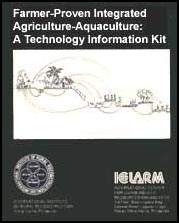 The case of rice-fish farmer mang isko,dasmarinas, cavite, the Philippines

Mang Isko is a 66 year-old farmer. Together with his wife, who is 60, they have eight children most of whom are grown up and living away from home. The only son is married and living with his wife and children near the farm of Mang Isko. This son helps Mang Isko in the day-to-day management of the farm. Two daughters are attending high school and still live at home. Two older daughters are living and working abroad in Japan. They send remittances home on a regular basis (P4,000/month) to support the education of their younger sisters.

Mang Isko farms 2.3 ha of lowland with access to irrigation water from the National Irrigation Administration distribution system. Two rice crops are grown in 1.44 ha. Half a hectare is devoted to ricefish culture. In some years, gourd are planted on the rice-fish dikes after the second rice harvest. Other vegetables occupy 0.14 ha of the term where bittergourds are planted in the dry season and relayed with stringbeans in the wet season. The remaining 0.2 ha houses 1 pig in a 15 x 12 m shed and the rest of the area are grown to fruit and fodder trees and grasses.

The 0.5-ha rice-fish system is composed of eight individual fields with side trenches. Two rice-fish plots have adjacent pond refuges in addition to the trenches. One rice-fish plot has an adjacent pond which is managed as a breeding pond. Mang Isko practices rice-fish culture in both wet and dry seasons and harvests two crops of rice and fish in a single year. However, when he plants gourd on the rice-fish dikes after the second rice-fish crop, he does not have a dry season rice-fish activity. In such occasions, the fields drained and the fish are are for for in the pond refuges.

Combining fish with rice has doubled Mang Isko's rice yields in some cropping seasons. He attributes the increase in yield to these factors:

· Rice plants uprooted when digging the trenches are used to patch up vacant spaces in the ricefield where transplanted rice have not grown.

· The beneficial effect of fish on rice growth is manifested in the increased tillering of rice plants and the uprooting of young weeds when the fish (carp) stir up the bottom of the field in their search for food.

· The introduction of fish has meant that Mang Isko spends more time in his farm. Thus, he can spot and remedy problems immediately. In his own words, he has become " a better farm manager "

· Dike construction is labor demanding. According to Mang Isko, it has been the biggest obstacle to the rice-fish adoption. Large dikes are required to avoid dike collapse and minimize water seepage and overflow. The dikes must be cleaned and weeded regularly to prevent damage by rodents.

· The trenches are dug one month after rice transplanting. The dug-out mud is placed on the dikes for maintenance and is the source of fertile soil for the subsequent cultivation of gourd. Also, at this stage, the dug-out soils are more compact as they have been soaked with water and this makes dike construction easier.

· Mang Isko uses one of the eight rice-fish fields with the highest elevation, as a test-field for monitoring water quality that comes in from the irrigation canal. This is to ensure that contaminated water due to pesticide applications of neighboring farms do not get into his rice-fish fields. The irrigation water is let through this field first and any adverse effect on the fish is observed. The field is only lightly stocked (50 fish per 800 m).

· Rice is transplanted 10-12 days after sowing in seedbed.

· Around one month after transplanting, three rows of rice, occupying about 60 cm, are removed for the purpose of trench construction. The uprooted rice plants are used to replace transplanted rice that have not grown.

· According to Mang Isko, IR 64/74/42 varieties are not suitable for rice-fish as they easily lodge.

· He will try to use an early-maturing rice variety for the dry season to avoid any critical water shortage. At present, he uses a 90-day maturing variety for both seasons.

· Mang Isko keeps a separate breeding pond. The advantage of having a breeding pond is that fingerling supply is ensured. Moreover, he could stock larger-sized fingerlings which can be harvested as tablesized fish immediately before rice harvest. However, without proper broodstock management, he had an inbred population after three years as reflected by stunted fish growth. After five years he did not keep any brondstock.

· Fingerlings are stocked in the pond refuges immediately after rice transplanting. After one week, the dikes connecting the pond refuge and the rice-fisy plots are broken to let the fish in the rice-fish plots. (Stocking density: 1 tilapia/m and 1 carp/5 m)

· The fingerlings/fish are graded into four classes when transferred from the breeding pond to refuge ponds and rice-fish fields. Class I = < 25 pieces/kg; Class II = 35 pieces/kg, Class III = 40 pieces/kg; and Class IV = > 50 pieces/kg. This is done in order to avoid cannibalism and competition that would otherwise lead to large fish stunting the growth of small ones.

· One week after trench is constructed, the trench is filled with water and fish are stocked.

· Rice straws from the previous crop are burnt and the ashes are returned to the fields for liming.

· Pig manure is thrown directly into the ponds or left by the water inlet to let the water carry/wash K into the rice-fish fields.

· Fish feed on fallen rice flowers. Mang Isko believes that this has a purifying effect which counteracts the perceived off-flavor taste of tilapia due to the presence of pig manure in the system.

· Rice bran is given one week after stocking in refuge ponds and trenches until two weeks before fish harvest. This is done twice a week or when required as may be signalled by the inactive behavior of fish or its stunted growth.

· Three weeks after transplanting, 100 kg of urea and 50 kg of complete fertilizer are applied to the ricefields.

· Mang Isko submerges the rice crop for three hours when insects become a problem. The fish then have access to feed directly on insects on the plants as well as insects trapped on the water surface. This practice is only carried out when the rice is 1-2 months old.

· Mang Isko reports that a neighbour of his uses Gliricidia (kskawate) as an insect repellent. In his first year of rice-fish, he placed Gliricidia branches of approximately 1 m length at 2 m intervals around the edge of the field at the booting stage of the rice, i.e., seven weeks after transplanting. He has now planted Gliricidia trees around the field as a means of biological pest control.

· When constructing the dikes, a layer of plastic is placed inside each dike. Rats find it slippery and difficult to penetrate the dikes with plastic lining.

· The fish are harvested by draining the field three days before rice harvest. The water level in the refuge is lowered to a couple of inches and the fish are caught by hand.

· Table-sized fish are sold. Fingerlings are kept for the next crop. Fish sizes that are in-between are returned to the pond refuge for further growout. They are sold or consumed at home as demanded. This is a source of continuous income from fish.

Initial cash costs for vegetable growing were incurred in the first months of operation.

The cash requirements for rice monoculture and rice-fish culture were more spread over the months.

Unscheduled fish harvests in between two total harvests are a source of continuous income or cash inflows that help relieve cash constraints in certain months.

· There were five months in the year where the cash obtained from the sales of rice, fish and vegetables were greater than the cash spent on farm operations.

· The months in between rice and fish harvests were the months that cash deficit was greatest.

· Although there were sales received from vegetables before the rice and fish harvests, there were not enough to cover the large expenditures on inputs particularly inorganic fertilizers.

As a whole, farming for Mang Isko was profitable. At the end of the year, he earned P45,233.80. He used this money primarily to sustain his wife and two children. A part of this was spent on upgrading his living condition, that is. he was able to improve his house and was able to purchase a refrigerator and a television.