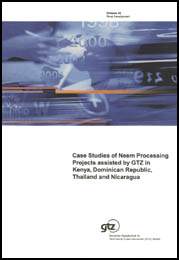 1.1 Survey of the GTZ's neem activities

Over the past 25 years the Deutsche Gesellschaft fhnische Zusammenarbeit (German Technical Cooperation, GTZ) has supported research, dissemination and use of agricultural applications of neem and neem products, particularly with regard to environmentally sound forms of plant protection and pest control (Schmutterer & Ascher 1980, 1984, 1987, Brechelt & Hellpap 1994, Foerster et al 1999) on behalf of the German Federal Ministry for Economic Cooperation and Development (BMZ).

In most cases, neem-related activities have been only a sideline of bilateral GTZ projects, e.g. those working on Integrated Pest Management (IPM). The only exception was the former supra-regional "Production of Natural Pesticides from Tropical Plants", often called simply the "Neem Project" in cooperation with the University of Giessen, with a field station in the Dominican Republic (1977-1995).

The objective of the project was to introduce the use of seed extracts and seed oil produced from the neem tree as insecticides for pest control for use by farmers in pilot regions. To achieve this aim, the supply to farmers of neem seeds as raw material was improved, methods for the production and application of simple neem products were developed and their socio-economic acceptance was investigated. In addition, information about the appropriate use of neem was spread among farmers and interested institutions and neem programmes and projects of NGOs were promoted. In cooperation with the University of Giessen, the project carried out in-depth investigation of the neem tree. Cooperation was also established with a range of NGOs in Sri Lanka, Thailand, Nepal, Niger, Haiti, Ecuador and the Dominican Republic.

The project has built the base for a wide range of neem projects operating within development cooperation world-wide, both at governmental and at non-governmental level. Today, five years after termination of the Neem Project, NGOs in Sri Lanka, Thailand, Ecuador and the Dominican Republic are still manufacturing and selling neem products.

When the Neem Project was due to be phased out in 1994/95, the GTZ's "Supra-regional Pesticide Service Project" took over the task of promoting the use of non-synthetic, and in particular neem-based, pesticides and other pertinent objectives until 1999, when it was succeeded by the project "Improving the Quality of Agricultural Produce" from 2000 onwards. Supra-regional activities concerning neem are also offered by GATE within their NGO-promoting programmes (ongoing) and for east Africa by the IPM Horticulture Project in Kenya (until 2000).

The following table gives an overview of the supra-regional GTZ projects working on neem:

Within the bilateral IPM projects (initiated at the request of our partner countries), the activities on neem are usually only one component among several, but their relative importance is steadily increasing. An overview of the projects is provided in Foerster (2000, 1999).

The expectations regarding the use of neem as a pesticide were that small farmers would adopt the technology of preparing and applying simple aqueous extracts of neem and that toxic broad spectrum synthetic pesticides would be replaced by neem extracts, beside the further merits and benefits listed in Table 2:

Table 2: Merits and benefits of neem:

During the project planning phases some experts argued that the effect of promoting crude water extracts would be limited and that it would be better to develop ready-to-use products. This strategy has been pursued in a bilateral IPM project in Myanmar, where an extraction plant was established as early as 1986, which is producing standardised neem-based pesticides. The market conditions in Myanmar are, however, artificial and cannot be compared to those of other countries.

As well as the merits and benefits of neem listed above, neem processing and the manufacture of commercial products have the following advantages:

Table 3: Advantages for the national economy:

In the mid-1990s the GTZ evaluated the potential of the neem tree. Its potential is not exploited to a great extent considering the strikingly long list of merits and benefits presented above. To identify the main constraints which hamper the use of neem pesticides in agriculture, a questionnaire was carried out (Moser 1996, Foerster & Moser 2000).

It turned out that the main limitations on the wider use of neem were:

· lack of knowledge about neem

These findings led to the conclusion that if the above-mentioned benefits were exploited to a greater extent, to increase the wealth of the people in developing countries, it would be essential to continue to:

· intensify the training with neem products,

· to come up with a competitive ready-to-use formulation which is easy for small farmers in developing countries to handle.

This was the aim of the three small projects presented here in Thailand, the Dominican Republic and Kenya, which were assisted in various ways by the GTZ (see below).

A great deal of the data and results presented here are based on an evaluation carried out by Dr W. Leupolz, CiM, H. Quentin, Consultant and Dr S. Praneetvatakul and her team, Kasetsart University, Bangkok, at the end of 1999 according to our Terms of Reference.

The evaluation aims to answer the following key questions:

· Is neem processing profitable for small entrepreneurs in developing countries?

· What are the key factors determining whether neem processing is profitable?

· To what extent can neem pesticides substitute synthetic pesticides?

· What are the "bottlenecks" hindering neem products from gaining a greater market share?

· Are the constraints caused by the internal factors of neem processing or by the frame conditions?

· What factors determine the price of neem products?

· What is the potential market share for neem products?

· What recommendations can be given, and what strategies pursued to promote neem in the future?

The objective of the case studies presented here is to document and evaluate the neem activities assisted by the GTZ in Kenya, Thailand, the Dominican Republic and Nicaragua, as examples of developing small-scale industrialisation of neem-based insecticides in developing countries from three continents.

The backgrounds of all these projects vary, not only due to the different ethno-social environment, and size and market conditions, but also due to the political and economic frame conditions in the individual countries. Surprisingly, however, there are a lot of similarities among the three projects and the problems they have encountered. The fact that there are many similarities despite the different frame conditions emphasises the importance of such a supra-regional project in the steering and back-stopping of such activities.

Over the last 25 years considerable progress has been made in raising awareness of the potentials of neem and to a certain extent of neem products, too.

However, more emphasis is needed on demonstration and training with neem products, and particularly on how to identify and implement efficient marketing and distribution channels for reliable standardised neem products manufactured by small-scale enterprises.

Given their properties and price, the existing (available) neem pesticides are a viable alternative for niche markets where they have the potential to gain a considerable market share.

If the expectation that neem pesticides can replace standard broad-spectrum pesticides to a considerable extent is to be fulfilled, a change of frame conditions is required, such as integration into IPM research, training and promotion concepts, a reduction of the retail price for neem pesticides by 25-40%, tax exemption, efficient marketing and distribution channels and integration in credit packages, amongst other items.

Hopefully further organisations will in future assist neem-manufacturing companies, NGOs and government organisations in training. This training should be directed at how to use neem, and at setting up distribution channels. These organisations should also advise local and/or national authorities on how to create favourable frame conditions for manufacturing, applying and selling neem-based products to take advantage of local resources and reduce the environmental and health effects caused by synthetic pesticides.