Inefficient and environmentally harmful energy use

The fuels and devices available to people living in poverty are typically less efficient, more hazardous to users and more damaging to the environment than those enjoyed by the better-off. The use of traditional fuels has a negative impact on the health of household members, especially women and children, when burned indoors without either a proper stove to help control the generation of smoke or a chimney to vent the smoke outside (Smith, 1987). Similarly, kerosene used in household lamps is a poison and a major fire hazard. Lighting with kerosene can be twice as expensive and up to 19 times less efficient per lumen of output than fluorescent lights using electricity as the energy carrier (Reddy, 1994). Moreover, inefficient lighting services in the home and in public areas are directly related to poor safety and personal security.

In many countries there is evidence of a so-called 'energy ladder' that differentiates income levels in terms of associated patterns of energy usage (Hosier and Dowd, 1987). For example, wood, dung, and other biomass represent the lowest rung on the energy ladder for cooking, with charcoal, coal, and when available, kerosene, representing the next rungs up the ladder to the highest rungs, electricity and gas. The order of fuels on the energy ladder corresponds to their efficiency (i.e., the fraction of energy released from the carrier that is actually turned into an energy service by the end-use device) and their "cleanliness". For example, the cook stove efficiencies of firewood, kerosene and gas are roughly 15%, 50%, and 65%, respectively. Therefore, moving up the energy ladder results in declining emissions of carbon monoxide, sulphur dioxide, and particulates.

It is estimated that more than half of the world's households use wood, crop residues and untreated coal for their cooking needs. In most developing countries, the household sector is the largest single energy consumer and cooking constitutes the dominant energy need. In the poorest countries, such as Burkina Faso, Ethiopia and Nepal, the household sector accounts for more than 90% of total energy consumption. The reliance on biomass fuels results in reduced agricultural productivity by depriving the soil of recycled nutrients that would have been available from tree, crop and animal residues and could be a cause of deforestation and desertification in some areas (Cecelski, 1987; Sarin, 1991).

Traditional cookstoves cause indoor concentrations of important pollutants, such as small particles less than 10 microns in diameter, known as PM10, carbon monoxide, benzene and formaldehyde, to be excessive compared to health-based standards or even to other common thermal applications. Such exposures are linked to acute respiratory infections, chronic obstructive lung diseases, low birth weights, lung cancer and eye problems, primarily, among women and children (Smith, 1990).

Solid fuels such as biomass are quite difficult to burn completely in simple household-sized stoves. Therefore, although biomass does not contain many non-combustible contaminants, the emissions of health-damaging pollutants in the form of incomplete combustion products are quite high per unit of energy. The use of solid fossil fuels for space and water heating in the home, or for cooking, is also widespread in many countries. Bituminous coal, or lignite for domestic use, is particularly problematic since it burns inefficiently and has high emissions of health-damaging air pollutants. Indeed, small-scale coal burning produces all the same pollutants as biomass, and in addition, sulfur and other toxic elements such as arsenic, fluoride, and lead. The use of unprocessed solid fuels, coal and biomass, in large furnaces and boilers achieves more complete combustion and thus lower pollution levels than in the case of household appliances.

Households that use coal and biomass generally have poor ventilation and because occupants are usually indoors when they use these fuels, they tend to be exposed to significant amounts of particulate pollution, as indicated in figure 2. Because a large portion of the population is exposed, the total indoor air pollution exposure is likely to be greater for the most important pollutants than from outdoor urban pollution in all the world's cities combined.

Health effects from biomass can be seen throughout the world. The largest direct impacts would seem to be respiratory infections in children (the most significant class of disease in the world) and chronic lung disease in nonsmoking women (Smith, 1987). Several other types of health problems are associated with this fuel cycle, including the impacts on women and children of gathering heavy loads of biomass in distant and sometimes dangerous areas. For example, an estimated 10,000 women fuelwood carriers in Addis Ababa, who supply one third of the wood fuel consumed in the city, suffer frequent falls, bone fractures, eye problems, headaches, rheumatism, anemia, chest, back and internal disorders, and miscarriages, from carrying loads that often approximate their own body weight and range from 40-10-50 kg. (Haile, 1991). The production of palm and other oils in women's informal sector enterprises is extremely arduous, requiring lifting and moving heavy containers of hot liquids and hence exposure to burns and smoke. 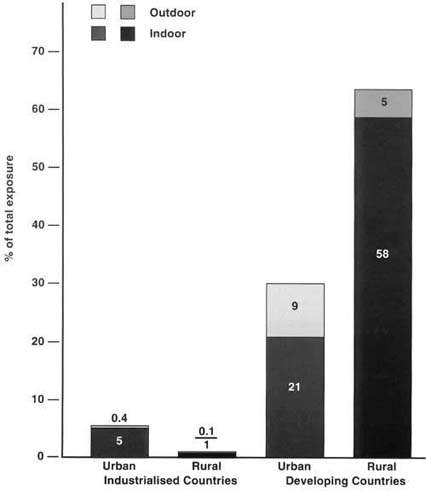 In addition, indirect health impacts from lack of fuel for proper cooking (malnutrition) and boiling water (diarrhea and parasites) may be significant, although difficult to document. The household use of solid fuels, therefore, is a useful indicator of potential environmental health hazards, although the degree of impact will depend on ventilation and other factors.

Today, widespread household use of coal is limited to a few countries; however, some countries are proposing to promote coal use as a substitute for dwindling supplies of biomass and to avoid increased demand for petroleum-based fuels, kerosene and gas. Given the high emissions associated with small-scale combustion of coal and the documented health effects due to household use of coal in China, South Africa, and elsewhere, this alternative should be carefully examined because of its adverse effects on health. In many countries of Europe in recent decades, the move away from household coal use was a primary means of controlling air pollution.

Household survey data reveal the connection between energy consumption patterns and poverty status. Figure 3 compares energy consumption and fuel sources of extremely low-income households (those in the lowest income quintile) with much wealthier households (those in the highest income quintile) in Pakistan. The energy carriers evaluated are biomass, kerosene, electricity, and gas; and the household activities examined are cooking and lighting. Note that many households could use multiple fuels for the same end-use (e.g., biomass and gas for cooking). The results in figure 3 suggest that people living in poverty are far more likely to use biomass rather than gas or electricity for cooking, and they are more inclined to use kerosene rather than electricity for lighting.