Poor women spend far more time and effort than men on energy-related activities. This gender bias is a further reflection of energy's largely non-monetised attributes among the poor, since much of women's work is characteristically unpaid work. Poor women are also disproportionately the victims of energy scarcity. The consequences are found in their poor nutritional status, poor health due to indoor air pollution, and even low literacy rates, which could be attributed to the fact that girls are more likely than boys to spend about 5 hours a day gathering fuelwood or drinking water (figure 6).

1 Money is 1991 Pakistani Rupees per year
2 Time is the average number of hours per year spent collecting wood or dung.
Source: (Pakistan, 1991) 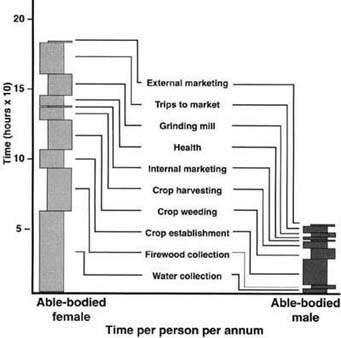 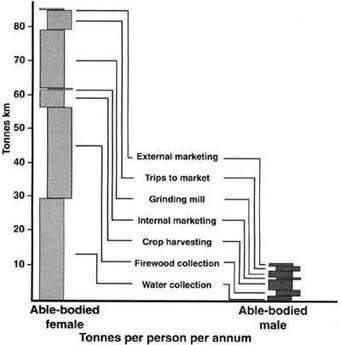 The fact that the poor, and especially poor women, spend more time than others for energy services, has a powerful implication. The economic hardship endured by very low-income households is understated when their incomes or consumption expenditures are evaluated in terms of goods and services typically consumed by households with average incomes or consumption expenditures. In particular, most of women's work remains unpaid in non-marketed or subsistence activities and is thus unrecognised and undervalued. Overall, if unpaid activities were treated as market transactions at prevailing wages, it is estimated that global output would increase by US$16 trillion. This represents a 70% increase in the officially estimated global output of US$23 trillion. US$11 trillion of this increase would correspond to the non-monetised, "invisible" contribution of women (UNDP, 1996).

Moreover, people living in poverty are often more willing to pay for energy and energy-related services than is conventionally assumed, and typically do so for batteries, battery-charging, small quantities of kerosene, charcoal and, in some cases, fuelwood. A recent survey in Uganda discovered that there are more rural and peri-urban households with private access to electricity from car batteries than there are public sector grid-connected households in the whole country. They pay on average 20 times the urban tariff, and spend over US$10 a month on candles, lighting, kerosene, dry cell batteries and recharging car batteries-or US$320 million nationally every year (Tuntivate, 1997).