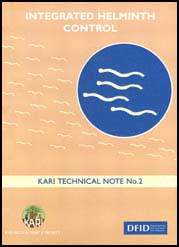 Since levels of worm infection are related to the climate and seasons, it is possible to treat animals at particular times of the year or in response to weather patterns. Three main strategies are possible:

1 Treatment at times of peak infection

The purpose here is to treat all animals in the flock/herd at the time of year when it can be predicted that infection levels will be at their highest or just before this when animals are under their greatest challenge. Greatest challenge is usually a few weeks after the onset of the rains.

While there are drawbacks to such a strategy in areas or seasons where there is prolonged rain, this scheme might be particularly suitable in more arid regions where rains are brief and larvae on pasture do not survive long after the rains stop.

Such a treatment may prevent the onset of clinical signs but may not prevent production losses or the build up of pasture infection levels for later seasons.

TREATMENT AT TIMES OF PEAK INFECTIONS

In practice, peak infection levels will commonly occur about 4-6 weeks after the onset of the rains and hence treatments at about 3-4 weeks into the rains may prove effective. If the rains prove to be prolonged or where grazing is a shared resource, a second treatment may be required 4-6 weeks later. The use of rafoxanide or closantel at this time in areas where combined fluke and Haemonchus infections are common may prove beneficial.

Infection with low numbers of Haemonchus at times of poor nutrition can lead to a chronic syndrome which can be difficult to diagnose. Animals respond well to an improvement in nutrition and/or treatment with an anthelmintic.

Usually such a treatment is likely to be most beneficial during the long dry season or in periods of drought. The earlier in the dry season that treatments are provided the less that body condition will have deteriorated and the greater the animal's chance of surviving through to the next rains. Treatment should not be before the pasture has started to brown off or else the animals may become reinfected after treatment.

Haemonchus larvae can enter a period of arrested development within the host in order to delay adulthood and egg laying until conditions are more suitable for transmission. There are two likely stimuli for this delay in development: the onset of host immunity and exposure of the infective larvae to increasingly arid conditions on pasture. In the first case, larvae will not develop further until there is a relaxation in immunity such as may occur during periods of nutritional stress, intercurrent infection or in late pregnancy. In the latter case, the stimuli for the larvae to recommence development are unknown but it is thought that this may occur randomly through the dry season, ensuring that the host always has a low but egg-producing worm burden.

The purpose of treating animals to eliminate the burden of inhibited larvae that they are carrying is to prevent them recontaminating pasture when conditions become more suitable for larval development. Thus female sheep or goats, treated in mid pregnancy may have a lower egg count through lambing and contribute less to infecting their offspring. Also by treating animals in the arid lands in the middle of the dry season, there should be fewer worms to contaminate grazing during the rains.