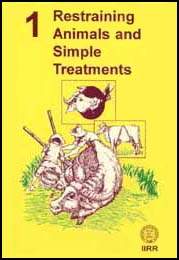 These manuals have been written with the simplest language possible for the convenience of the intended user -the animal health practitioners or ("pare-vets") working in isolated rural communities. It is not designed to be a complete veterinary medicine reference material. But rather, aims to present the most important animal health problems commonly encountered and some of the most effective, but simple treatments.

The manuals are divided into four separate booklets

Common antibiotics, hormone vitamins and dewormers mentioned are mostly in solution. For dosages on the mixtures prescribed see page 12 of Restraining animals and simple treatments.

We hope that these manuals will help rural animal health practitioners to identify and remedy common health problems which they may encounter in their work. Further, we hope that this humble contribution will truly help practicing "para-vets" to make greater contributions as partners in the veterinary profession.

We would like to gratefully acknowledge the funding support provided by the Canada Fund-Philippines of the CIDA trough the Canadian Embassy. Their support financed the fieldwork upon which these manuals are based, as well as the actual production and printing of the manuals. Their continued assistance to the betterment of the rural communities of the Philippines is greatly appreciated.