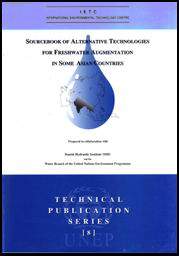 Water is basic to the human health, welfare and economic development. Water is equally vital for the preservation of wildlife and the natural environment. Freshwater is a central feature of climate, and can be a source of energy, an avenue of transportation, and a means of production and aesthetic inspiration. Its presence or absence governs the nature and placement of structures within the physical landscape and it exerts a major influence on demographic patterns. It is also viewed as a key to economic growth and prosperity.

Freshwater, or that portion of the world's water resources suitable for use by humans and most terrestrial vegetation and wildlife, is a small portion of the global water supply. For domestic and agricultural uses, freshwater generally refers to water containing less than 1 000 mg/l dissolved solids. (Although, depending on the specific purpose for which the water is used, this concentration may be higher or lower; for example, salinity levels in freshwater for drinking purposes should not exceed 500 mg/l, while, for irrigation purposes, they should be less than 2 000 mg/l.) The presence of other contaminants such as toxic substances, disease-causing organisms, nutrients, oxygen consuming substances, and suspended solids also decreases the quality of freshwater for human and environmental uses.

For centuries, this limited volume of freshwater has been augmented for different human purposes using various indigenous and modem technologies. Frederick (1992) points out that freshwater augmentation technologies in 1990 have advanced little in the several centuries since the early achievements of the Romans in transporting water over long distances and the Dutch in manipulating and regulating water levels. Likewise, in Asia, few advances are evident since the development of large irrigation projects in China's Sichuan Province, runoff farming collection systems in Israel's Negev Desert of Israel, and, in the rural areas of Thailand and Indonesia, the indigenous practices of rainwater collection, developed during the past several centuries.

The absolute shortage of freshwater is further compounded by the fact that freshwater is unevenly distributed geographically and seasonally. Thus, the need for augmentation technologies remains. Most recently, decades of water development and management policies have focussed on supply-side management with the construction of large reservoirs, dams and conveyance systems, as well as deep tubewells. Despite these technological advances in freshwater augmentation, the modem era is not only facing tremendous water scarcity, but also a shortage of the capital investment funds necessary to continue the scale of construction likely to be required in the future. Further, conservationists and NGOs are placing ever larger hurdles in the path of these modem water resources development projects, as the damages caused by many past projects have become obvious, even though the previous construction of hundreds of large and small dams and deep tubewells has contributed significantly to the overall well-being of the people and societies in the Asia (WRI, 1994).

This issue of water scarcity, and the associated cost of developing new water resources, has now been placed water at the top of the international agenda. The United Nations Commission on Sustainable Development (UNCSD), at its first meeting to review global progress in the implementation of the United Nations Conference on Environment and Development's (UNCED) Agenda 21, Chapter 18 (Freshwater Resources), called for a comprehensive assessment of global freshwater resources as an initial step in assessing the adequacy and suitability of the world's freshwaters for meeting current and future human demands. In the meantime, water resources managers have begun to focus increasingly on other methods of freshwater augmentation, including a return to the more traditional technologies developed throughout the world. This book, prepared by the United Nations Environment Programme's (UNEP) International Environmental Technology Centre and Water Branch, provides a catalogue of technologies traditionally and currently used in some countries of the Asian region, as an initial step in compiling a global source book on freshwater augmentation technologies. This book is one of five such volumes prepared by UNEP in support of Agenda 21, Chapter 18 and Chapter 34, the latter presenting a detailed plan of action for the assessment and transfer of technologies worldwide.

The increasing water resource scarcity has already affected the water supplies in major cities of Asia. Of 38 major cities, only 21 cities have full water supply services. Others have already faced rationing of water supplies. While cities like Lahore, Jakarta and Manila provide 16 to 20 hours of service per day, Delhi, Rangoon, Karachi, Dhaka, Bombay, Calcutta, Madras and Kathmandu provide only between 1 and 10 hours of service per day (ADB, 1993).

· in Madhya Pradesh, India, extensive waterlogging of soils due to historic agricultural practices have caused farmers to refer to their once fertile lands as "wet deserts" (Postel, 1985).

· groundwater overdrafts in the northern provinces of China, typified by annual pumping volumes in Beijing that exceed the sustainable supply by 25%, have caused water tables in some areas to drop by up to 4 m/year, and, in Tianjin, by 20 cm every year (Postel, 1985).

A further dimension of the problem is a result of the decreasing assimilative capacities of the rivers and waterbodies in major urban areas. Freshwater used for consumption and production processes are typically drained as wastewater to surface water courses. Usually, during the dry season, these waterbodies are often loaded with sewage and effluent in amounts greater than their carrying capacity. In such situations, water availability is not only constrained due to physical limits, but also due to deterioration in water quality. The Human Development Report (UNDP, 1992) indicated that the majority of the population in developing countries still lack safe drinking water and that more than 50% of the population have no access to potable water.

The unit production cost of water in public water supply systems in the major cities of Asia varies from about $0.01/m3 in Hanoi to about $0.32/m3 in Hong Kong. Nearly 70% of water supply utilities have unit costs below $0.10/m3. The average tariff, estimated from annual water bills in 38 major cities of Asia, ranged from about $0.01/m3 in Shanghai to about $0.47/m3 in Port Vila, with a median tariff of $0.44/m3. However, both the unit production cost and tariff rates do not include the social cost of production or scarcity or opportunity costs of the water. In addition, these costs suggest that water augmentation efforts of the past have largely neglected the environmental costs of rates of withdrawal of available freshwater that exceed rates of replenishment. Indeed, such relatively low costs have encouraged this rapid rate of depletion of water resources in many urban areas.

The costs of water supplied by municipal systems in some urban areas, however, have already started to rise. In the Bangkok Metropolitan Area, the real, per unit rate of water consumed has almost doubled between 1976 and 1989, while the per unit supply cost to the consumer has increased by two and one-half times. The economic costs of groundwater depletion in Bangkok City are realized in the increased costs of pumping water as ground water levels recede, and the costs of providing surface water to substitute for groundwater that has become saline. In addition, there are other costs of too high a rate of water withdrawal, including the costs of land subsidence and related costs of damages to structures, streets, and underground water, sewer, electric and telephone lines, and an increased risk of damage from flooding (Phantumvanit et al, 1990).

In Thailand, the marginal construction costs of all types of irrigation systems installed between 1978 and 1990, rose until the mid-1980s, but declined thereafter in response to a decline in the incremental area brought under irrigation. An economic evaluation of irrigation systems constructed during this period indicated that scarcity, and high rental and opportunity costs contributed to the decline in new irrigation areas (Tiwari, 1994).

Despite the water shortages in many parts of Asia and other constraints, no incentive mechanisms are currently being actively promoted, either for the conservation of available water or for the technological innovations for augmenting and conserving water in future. Supply side management, dominated by a command-and-control approach, has long dominated the field of water resources management, and the increasingly significant environmental dimensions of the water supply problems have been neglected.

The persistence of water scarcity problems in many countries of Asia suggests two major areas for concentration in terms of freshwater augmentation technologies. First, decision-making criteria, presently based on engineering and pure economic grounds, should be shifted towards a more comprehensive, decentralized and participatory type of management system. Development efforts also should be carried out in an environmentally sound and sustainable way. This requires an integrated approach rather than the continuation of conventional practices.

Second, it is time to look for traditional, low-cost water collection and use systems, which have been practised for centuries, as well as other technological options. Low-cost water collection systems, such as rainwater harvesting, conservation of freshwater through dual distribution system and alternative technological options, have to be perceived as sound bases for developing new sources of water. Technologies related to water conservation, including those concerned with quality and standards, can have long-term impacts on the availability and capacity of traditional sources of water to supply freshwater for human uses (Keenan, 1992). This, no doubt, will add additional costs to the development of new water resources, but can satisfy the need to maximize the use of existing water resources as well as augmentating such sources with previously unexploited water resources using both the modem and traditional techniques. These augmentation technologies include wastewater reuse, water recycling, desalination, dew harvesting, and fog and rainwater harvesting. Nevertheless, application of these technologies are still limited, mainly because of the lack of information on the appropriate technologies available (Table 1).