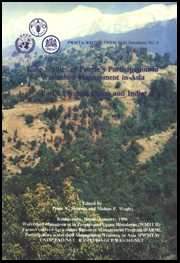 Constraints to the model of people's participation practised by the BTRT project include a lack of a well-defined role for the CDCCs, in particular the misunderstanding of that role by women members. Other needs are strengthening capability, synchronizing development and agricultural work schedule and better maintenance of works.

SCWM activities demand a lot of labor. Farmers whose lives depend on earning a daily wage cannot easily afford to provide this. During field visits, it was noted that women sell wood and cereal grains in order to raise the CDCC membership fee in the hope that they will be able to borrow from the CDCC fund if they need to. According to the Chairperson of a CDCC in Begnas VDC such women members are not willing to spend the hard-earned fund on social welfare or rural development activities. In fact, she claims that these women members would never have joined the CDCC, if they knew its social obligations.

Since the guidelines for people's participation in SCWM were developed very late, the CDCC's role in the overall development of village is not clearly defined. The project staff feel that participation is needed, but in the field most of them still think that obtaining certain percentage of cash-in-kind (labor time) from the local people, is participation.

CDCCs need to strengthen their capabilities. Specially, the members need to be educated about community organization, the legal status of CDCCs, the role of CDCCs in development and their connections with other development agencies in the district.

SCWM activities are selected in consultation with local people in order to set realistic targets which match the needs of the villagers. At present the crop calendar is not fully followed. So, people are often forced to participate in development activities at the cost of their agricultural activities. Since the project has also learned that SCWM are best implemented during slack agricultural periods, SCWM activities should take place only in non-peak seasons and the crop calendar should be considered in preparing the SCWM annual work schedule.

Many small ponds have been dug by villagers for water harvesting from slopes. These ponds are mainly serve as water-holes for the animals and need regular cleaning of sediments. The villagers have requested the project to help them repair these ponds, but more works still need to be done.