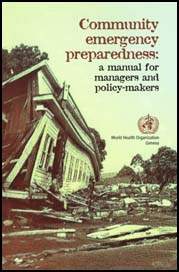 A community is composed of a group of people and the environment that supports them. For the purposes of this manual, a community will be defined as the people and environment contained at a local political and administrative level. This level needs to be small enough to allow community participation but there must be sufficient resources to permit realistic planning. Often planning will take place at several political or administrative levels simultaneously.

Because this manual is intended to be used in different countries, the following generic framework for government and administration has been assumed:

- community (the lowest administrative level within a country, corresponding to a village and its environs, county, town, or district);

- province (corresponding to a region or state);

Factors that may be relevant in assessing the vulnerability of a community and the ways in which it can recover from emergencies are demography, social structure, culture, economy, infrastructure, and environment. What is missing from these factors is the feeling of common interest, the social networks, and the shared experiences that exist within a community. Since communities are groups of individuals, most of whom need social interaction, there are many emotional and other mutual bonds between community members. These bonds form networks that may be difficult to analyse. They are, however, a very meaningful part of a community and play a significant role in its well-being.

There are also interactions between communities - the result of social, economic, or cultural ties. Thus, communities are not isolated but interconnected in a variety of ways. The effects of an emergency on a community will therefore be felt outside its strict administrative boundaries.

- allow the use of local knowledge and expertise, provide opportunities for participating in decisions that concern the community, and ensure policies and practices that allow for self-determination and maximum community involvement in response and recovery planning;

- ensure cooperation between professional personnel and volunteer members of the community;

- make use of the existing structures, resources, and local networks wherever possible, and of the community’s own material and physical resources, particularly local suppliers;

- allow national and international organizations to channel resources directly to the community through predetermined and agreed procedures.

WHO describes community participation in the following ways:

Spontaneous, induced or compulsory participation. Experience has also demonstrated that participation can be characterized as spontaneous, induced or compulsory. In general, “spontaneous” participation refers to local initiatives which have little or no external support and which, from the very beginning, have the power to be self-sustaining. “Induced” participation, which appears to be more common, results from initiatives which are external to the community and which seek community support or endorsement for already defined plans or projects. “Compulsory” participation usually implies that people are mobilized or organized to undertake activities in which they have had little or no say, and over which they have no control.

Cooperation and power-sharing. Participation can also be classified on the basis of whether government is actively seeking cooperation or wishes to promote power-sharing. Where cooperation is sought, people are usually granted the right to receive information, to protest, to make suggestions and to be consulted before decisions are implemented. In power-sharing, the community is understood to have the right to share in all decision-making and has the power to veto ideas that are not in line with its own objectives.”1

It should not, however, be assumed that a community represents a unified point of view. Often there are major conflicts of interest and the most vulnerable community members are excluded from decision-making. Real community participation requires methods for actively involving even the most marginalized community members, e.g. the disabled, homeless and displaced individuals, immigrants, and - in some societies - women.

The multisectoral, intersectoral, and all-hazards approach should be a partnership of relevant organizations and sections of the community, based on identifying vulnerabilities and planning action to reduce them. Within this framework, each partner accepts the responsibilities for which it is mandated, but within objectives defined by the community.