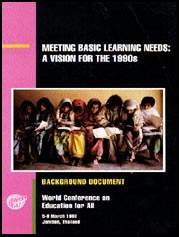 Early child development can be considered a component of basic education because learning begins at birth. Moreover, a growing body of evidence demonstrates that health, nutrition, and psychosocial processes interact to affect survival and development in the early years of life. The outcomes of these interactions condition the readiness of the child for school and other learning opportunities, which in turn influences the child’s chances of enrolment and success in basic education programmes.

As with basic education for adults, the data on early child development is incomplete and does not lend itself readily to international comparisons. Early child development may include some or all of the following: nutrition supplementation, growth monitoring, care-taking, home instruction in pre-literacy and numeracy skills, and parent education for the benefit of the child, which may also be considered under adult education.

According to 1980 data from the World Bank, enrolment in preschools, a sub-category of early child development, was quite low in most low-income economies, with a median of one percent of the age-group for countries reporting data. In middle-income developing economies, the picture is more mixed. Enrolment rates ranged from a low of one percent to a high of 57 percent, with 4.5 percent as the median for lower-middle income economies and 15 percent the median for upper-middle income. In high income economies, median enrolment rates were 25.5 percent, with a range from less than one to 66 percent. However, most statistics focus on organized preschool and child care programmes. Because of the difficulty in defining and identifying such educational programmes, the Unesco Office of Statistics points out that their estimates should be considered as the minimal figures for each country. What is clear from the data, however, is that in many countries, early childhood education has been the most rapidly expanding sector of education over the past decade.

A. Adult students per adult population

B. Women as a proportion of adult students

From the growing body of studies and reports on specific early child development, two important impacts of early childhood development programmes on meeting basic learning needs have become evident. First, attention to the physical and psychosocial development of young children often enhances their ability to benefit from schooling, thereby increasing efficiency within the school system. Second, the positive effects on school performance of early child development programmes has been shown in many cases to be more significant for girls than boys, and for children from disadvantaged social groups than those from more affluent homes. Thus, early child development can have a substantial equity effect, by reducing disparities in subsequent educational attainment. So long as such programmes are only available to higher income groups, however, they may have the effect of further advantaging those groups, thus increasing inequities in learning achievement.