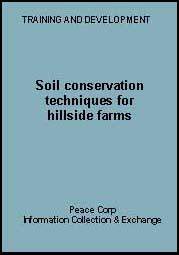 One of the main problems faced by agricultural extensionists is gaining credibillity in a community. People are often unwilling to invest time or money to try new techniques that they do not understand, solely based on the word of an outsider. m e following demonstrations can help farmers understand more about their soils and how they might benefit by changing some of their traditional agricultural practices.

As water is dropped on the soil next to a piece of white paper, soil particles are dislodged and splash onto the paper. This demonstration done over a mulch-protected soil results in no dislodging of soil particles. This illustrates the value of a permanent ground cover or mulch in the prevention of soil erosion.

Form two mounds of soil and scratch contour furrows in one and furrows straight up and down on the other. When watered, the mound with contour. furrows should erode less than the other mound.

This demonstration can be used to stress the importance of working the land along the contour. A trial run should be made before the actual demonstration to determine the appropriate watering intensity.

Place soil in a bottle, add water, shake, and set on a stable level surface. The heavier sand-sized particles will settle out first followed by silt-sized and then clay-sized particles. This demonstration illustrates the particulate nature of soils and can be used to help farmers understand what soil texture means and how it can be important in affecting the drainage or erodability of a soil. The bottles should be allowed to remain undisturbed for a full day in order for the finer, clay-sized particles to settle out.

By digging soil pits at the spots indicated in different parts of a field, the results of past erosion can be seen. The much thinner layers of the more fertile A and B horizons on the more steeply sloped areas can be helpful in explaining the need to introduce soil conservation measures.

Planting of 3-5 corn seeds in cans containing soils from different horizons or from eroded and non-eroded parts of the same field can demonstrate the difference in fertility between upper and lower soil horizons and the value of protecting the upper soil horizon from erosion. This demonstration requires 36 weeks to show best results.

Similar to number 5, this demonstration can be used to show the benefits of using different techniques to maintain or increase soil fertility. Again 3-6 weeks are required for best results.

Growth trials such as the ones shown here can be carried out to show an unlimited number of comparisons. It might also be valuable to try mulched soil, repeatedly burned soil, waterlogged soil, another crop which could be grown to maturity (beans, radishes, carrots), etc.