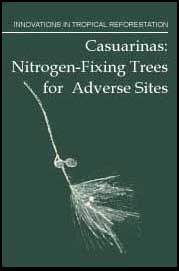 Casuarinas are normally propagated by seed. As previously noted, most species have separate male and female trees, but some have both flowers on one tree. (See table.) Trees normally flower at an early age and produce seed in good quantities most years. Extracting the seeds is relatively simple: cones, or cone-bearing branches are placed in the sun to dry.

In 2 or 3 days the woody valves (bracteoles) open and the winged seeds are released and can be collected.

The seed of most Australian casuarinas stores well when dried and kept in closed containers at room temperature. Tests showed little loss in germination after 12 years of storage for Casuarina cristata, Casuarina decaisneana, Casuarina glauca, Casuarina stricta, and Casuarina torulosa. On the other hand, seed of Casuarina equisetifolia is best stored at low temperatures, and although Casuarina cunninghamiana seeds will keep well for 1 or 2 years, the viability of even freshly collected seed is sometimes low. In general, seed of Asian and Pacific Island casuarinas seems to store poorly.

Seed of the different species varies greatly in size and germination requirements. Most germinate in 2-3 weeks, but Casuarina decaisneana is quicker, probably because it is adapted to take advantage of sporadic rainfall in its arid native habitat.

To produce seedlings in a nursery, conventional supplies - such as pots, tubes, and sleeves - can be employed. Even extremely primitive techniques are successful in many cases. Young trees are often transplanted bare-rooted, usually when 30-50 cm tall.

On many reforestation sites direct seeding is likely to be successful because casuarinas naturally reseed themselves very well on open, disturbed areas. Road banks in Australia, for example, are often revegetated naturally by casuarinas. Deep volcanic ash, that erupted in 1960 at Kapoho, Hawaii, has become completely revegetated by Casuarina equisetifolia, seeding itself during the years since the eruption. Natural seeding seldom occurs directly beneath a parent tree or under the canopy of a casuarina stand. However, abundant reproduction occurs in shallow, windblown litter in open areas adjacent to the trees.

Probably all casuarinas can be propagated vegetatively. A sterile hybrid of Casuarina equisetifolia and Casuarina junghuhniana is reproduced almost entirely by cuttings in Thailand and India, and it seems likely that other species can also be propagated this way, although most have not been tried. Cuttings have the benefit of being a rapid, sure method of perpetuating the traits of superior specimens and also of allowing trees of a single sex to be planted so as to avoid weedy regeneration through the spread of natural seedlings.

A vegetative propagation technique recently developed in India for both Casuarina equisetifolia and the Casuarina junghuhniana hybrid involves the rooting of clusters of shoots (sprigs). These are dipped in rooting hormone (sometimes this step is omitted) and placed in a humid atmosphere - for example, in a sealed plastic tent in the light shade under coconut trees. After 20 days they establish roots and can be planted out. This seems like a promising breakthrough for the rapid propagation of desirable casuarina specimens and it may be applicable to species other than the two used by the Indian researchers

As discussed earlier, several species of casuarinas are characterized by "root suckering," that is, by the abundant formation of root-originated shoots. This ability makes them candidates for management under a sort of "coppice" rotation. However, it can create a random, dense mass that makes management difficult. Root suckering occurs in Casuarina cristata, Casuarina glauca, Casuarina junghuhniana, Casuarina luehmanii, Casuarina obesa, and Casuarina stricta. Some of these species sucker more readily than others, and it is not known whether this characteristic is genetic, and therefore limited only to them, or whether it is a general property of casuarinas that is elicited only when environmental conditions are favorable.

The Frankia actinomycete that forms the symbiosis with casuarinas is found naturally in soils where casuarinas are native. However, when the trees are planted outside their normal range the microorganism could be missing. In nursery plantations where sterile soil mixtures are used, the seedlings must be inoculated with Frankia from pure cultures or from ground- up nodules. It seems probable that even where casuarinas do form nodules without inoculation, the rate of nitrogen fixation might be improved by introducing a more effective strain of Frankia. Techniques for handling the microorganism were worked out in 1983.

A practical inoculation technique for general use in the field is to shovel some surface soil from under a casuarina tree into the planting medium used in the nursery. Its Frankia spores then infect the seedlings.

A more sophisticated technique involves obtaining some root nodules from established trees and soaking them in 70 percent ethanol for a few seconds (to reduce the risk of contamination from microbes on the outside of the nodules). They are then washed, crushed in water, and the coarser particles filtered out. The resulting suspension is applied to the roots of casuarina seedlings or injected into the soil within the seedling's area.

Fresh nodules can be dried over silica gel and stored for up to a year without losing their infective ability. Ground-up nodule suspension can be stored also in saline solution or in a polyvinylpyrrolidone solution.

Frankia are easier to handle than rhizobia (the bacteria that live symbiotically with many legumes and help them the way Frankia helps casuarinas) as the spores can be dried and stored at room temperature without losing viability.

In phosphorus-deficient soils, casuarina plantings should also include inocula of the mycorrhizal fungi that help the trees obtain phosphorus. In soils devoid of all available phosphorus (as might occur in some sand dunes, for instance), it is necessary to apply a small quantity of phosphate fertilizer, since this induces a good response from both plants and mycorrhizae. The mycorrhizae are not available in inoculum form; a sample of soil from around established trees is currently the only source.

Normally, casuarina plantings are given little site preparation. Even in the aridity of Egypt the saplings receive only a little watering during the first year, and after that they have to survive on their own.

Spacings differ with the end use and the site. For rain-fed plantations, 1,000-2,500 trees per hectare are used if billet-sized materials are desired. With irrigation, it is possible to plant 10,000 or more per hectare, although the products are smaller in diameter. In Egypt, for example, planters use an in-row spacing of 0.5 m for fuelwood and 2.5 m for scaffolding poles. Where plantations are established for wind protection in harsh sites, 3 m x 3 m spacing is appropriate. In Papua New Guinea 4 m x 4 m is used for shading coffee plantations.

Although some diseases and pests have been noted in specific locations, casuarinas are generally healthy plants.

In India, the fungus Trichosporium vesiculosum, which causes a serious peeling of bark and may kill the trees, has been noted on Casuarina equisetifolia. It infects roots, especially where excessive watering and crowding occurs, such as along river banks. Another, but less serious, fungus, Ganoderma lucidum, starts as a saprophyte on nearby decaying stumps and then becomes a parasite on living trees by entering through wounds.

In the Guanica area of Puerto Rico, many casuarinas were killed in 1940 by a dieback disease, and stem canker and dieback have affected trees there since that time. Investigators attribute these syndromes to the fungus Diplodia natalensis. A similar problem was noted in some casuarinas in Florida in 1965.

In Florida there has been a high rate of mortality from mushroom root rot caused by the fungus Clitocybe tabescens, primarily on sandy soils previously populated by oaks. Casuarina cunninghamiana, Casuarina equisetifolia, and Casuarina glauca are all affected.

To date, no major insect problems have been encountered in adult plantations except for Apate monachus, the black borer, which tunnels into the stems and makes them susceptible to wind damage.

Nursery seedlings are liable to attack by crickets, chiefly Brachy-trupes achaetinus. Caterpillars and aphids also occur in nurseries, but not in older trees and not when the nursery is near the sea.

In the sapling stage in Puerto Rico, grubs of Coelosterna scabrata have been noted boring into the root column, eventually killing the plant. Arbela tetraonis is a bark- and wood-boring caterpillar that can be easily detected by a characteristic covered trail winding over the bark.

The caterpillar of Phassus malabaricus bores into the stem close to the ground and pupates in the larval burrow; it kills the tree by girdling it. In Nigeria casuarinas up to age 3 years have been damaged or killed by termites.

Young trees can be damaged by browsing or trampling, but they are resilient and tend to recover quickly. In Florida, deer sometimes browse seedlings so severely that the plants are killed. In California, as in Australia, young seedlings are susceptible to browsing by rabbits.

Damage can be severe in some areas and seasons when other palatable vegetation is sparse, especially in desert environments. In Hawaii, on the goat-infested island of Kahoolawe, Casuarina equisetifolia survived nicely behind a fence but were eaten when the fence rusted away.

Most casuarinas are severely damaged or killed by frost. Non-Australian species, such as Casuarina oligodon and Casuarina junghuhniana, grow in regions that are largely frost free. Coastal species such as Casuarina glauca rarely experience temperatures below-3°C, while Casuarina equisetifolia occurs naturally only in frost-free areas.

Most species of Casuarina are moderately tolerant of fire. This is a serious problem in Guam. Casuarina decaisneana, for instance, can tolerate extremely hot summer fires in Central Australia - the black color of its thick bark is a result of fire scorch. If tops are killed the trees will coppice, develop shoots from the roots, or (if not too severely damaged) produce new crown shoots. Some species shed seed soon after the seeds mature, so at times of fire there is usually no seed stored on the tree and seedling regeneration is therefore sparse.

Some casuarinas, however, appear to be fire-tender. These include Casuarina fraseriana, Casuarina littoralis, and Casuarina torulosa. They can be damaged by fire but produce vigorous new shoots afterwards. And because they carry cones for several years without shedding seed, seedling regeneration may be profuse in the seedbed created by the fire.