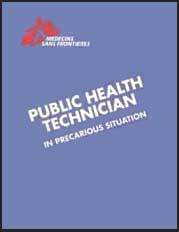 Problems due to a lack of water

In extreme cases of lack of water, life is simply not possible (dehydration and death).

Less extreme shortages also have an impact on the health status of a population.

They provoke an increase in the incidence of numerous diseases due to a lack of hygiene. Good personal hygiene requires a sufficient quantity of water.

The diseases linked to a lack of water for personal hygiene, called "water-washed diseases", are:

Dermatological and ophthalmic diseases directly due to a lack of hygiene such as scabies, trachoma, conjunctivitis, etc.

Lack of personal hygiene and washing of clothes encourages the proliferation of lice which, in addition to the problems caused by their presence (itching and scratching, skin sores), are disease vectors. They transmit louse-borne typhus and recurrent fever.

Most of these diseases can spread epidemically in concentrated populations.

Water may contain numerous dissolved chemical substances which come either from pollution fertilizers insecticides, industrial waste, etc.), or from the composition of the rocks themselves (fluorine, arsenic, iron, etc.).

These substances may give the water such a bad taste that it is undrinkable (for example, if it contains too many salts or too much iron), but it may also, in the long term, cause severe health problems, for example:

- methaemoglobinaemia in babies, due to high nitrate levels,

The possible presence of toxic substances in water is something which must be borne in mind, but in the situations considered here, the microbiological quality of the water is a much more important and preoccupying problem.

Water may contain numerous pathogenic organisms and thereby become a means of transmission for many diseases:

It should be noted that these so-called "water-borne" diseases form part of the group of "water-washed" diseases as well. They may also be transmitted by any of the faeco-oral routes: dirty hands, dirty food, dirty water, etc.

Besides these diseases, water is also involved in the transmission of "water-based" diseases (in other words, those diseases of which the causative agent passes part of its life-cycle in an aquatic plant or animal):

- The different schistosomiases or bilharzias: diseases caused by helminths (worms) which are usually contracted by contact with infested water (washing clothes, bathing, etc.), but sometimes also via the oral route.

- Leptospirosis: a bacterial disease which is contracted primarily by contact with water contaminated with the infected urine of various animals (principally the rat), but also by drinking such water.

All the infectious diseases transmitted by water -with the exception of Guinea worm- are linked to the pollution of water by the excreta of humans or other animals (from the sick or from healthy carriers).

Problems due to water-based insect vectors

One last category of water-related diseases is those with an insect vector which develops in or lives near to water, for example malaria, dengue and yellow fevers and onchocerciasis.

The solution to these problems lies among other things with the choice of site for a settlement and with environmental hygiene measures (drainage, elimination of stagnant water, covering reservoirs, etc.). They will not be considered in more detail here.

The major danger is pollution of water by fl matter. Everything possible should be done to prevent such pollution. Nevertheless, it is preferable to have a lot of water of average quality than a little water of very good quality.